The day finally arrived when I found a girl that wanted to share in my misadventures! The trouble is, my seven year old Lynx 2 just isn't large enough for two people AND their jackets, helmets and boots... So I opened the wallet, blew out some of the dust, and placed an order for the Chaos 3 tent by Alps Mountaineering.

After paying for the floor saver, taxes and shipping charges, I think I am into this tent for $300 Canadian. You can do much better than the manufacturers suggested retail price of $279 USD, so shop around.


Why the Chaos model? It has more interior mesh than the Lynx 2 so it should offer more ventilation for hot summer weather. The cross bar supports the sides, so in addition to more available headroom than the dome, it also keeps water from dropping down INTO the tent which imho was the Lynx 2s single biggest failing. During a rain shower in the Lynx 2 you had to keep the rain fly zipped 1/2 way to channel the water down away from the inner tent. It's a dome shape, think about it.

It's a couple of pounds heavier, but basically the same pack size and should give us enough room to store our helmets, jackets and boots inside the nice dry tent with us.

You may find as I did, that the Alps tents can benefit from items such as a footprint, some better engineered tent pegs, etc. I did this with my Lynx 2 and have already bought a new footprint and a set of decent tent pegs. I've plenty of 550 paracord to make my own guy ropes if there are any needed for the Chaos 3. (It needed them)


I purchased the tent from Motorsport.com a week and a half ago, and the floorsaver from Amazon.ca and they just arrived at work today, so now I have dreams of pitching a tent on the Company lawn after work! Yeah, I can get a bit weird like that. :D

The stuff sack they pack it in has a couple of friction buckle straps on it with a carry handle, and when I slackened them off to get the tent out, found they were stitched onto the bag, and I found myself silently applauding their design change.

Next I found that the tent poles, do to their single pole design, were a bit bulky, and that was proven again when they went back into the bag from whence they came. I thought of myself standing in a downpour with water dripping off of my nose as I tried to slide the poles back into the bag.

Setup is very straightforward. Lay out the floor saver, lay the tent on top of that, set up the poles, then place the foot of the four poles into the grommet in each of the four corners of the tent and floor saver, then clip the hooks onto the poles and Voila! The tent is up and you just need to sort out the rain fly.

Shown with the spreader pole installed, this is the magic of this tent... My old Lynx 2 would allow rain to drop straight down onto the tent floor if the fly was not zipped up to within 12 to 18 inches of the ground, while this tent uses the spreader to allow you to have the rain fly doors rolled up and out of the way if the rain is not driven sideways.


Unboxing the tent, the rain fly does not have the guy ropes attached, so I quickly fastened them on using a secure bowline for each one, but as I noticed with my older Lynx 2, Alps Mountaineering still leaves two guy rope attachment points on either end of the tent, but with no guy ropes for it. I was prepared and quickly fashioned a couple of three foot guy ropes out of some spare para cord that I had brought down for just that purpose. 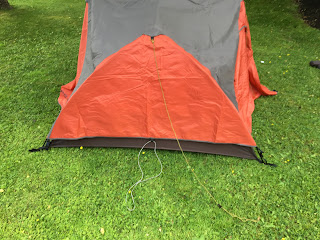 The pale guy rope in the centre is one of two I just added. When the tent is guyed out, you want to stake these two ropes out so the rain fly stands off of the interior tent. And speaking of guy ropes, they added a strange tensioner that seems overly complicated. It's a black piece of plastic with a friction portion that just isn't intuitive.


So today I shelled out a whopping three dollars and will replace the supplied guy rope tensioners with some primitive stone aged ones that have been working since man learned how to make rope. I sourced them on AliExpress and with free shipping should arrive in time to make a November birthday present to myself. Seriously, my girlfriend, while we set this up in the rain (speed was critical) wrapped the guy rope around the pegs as she did not have the time to sort out how they worked, and why would you? The Alps Lynx 2 used the tried and true two hole plastic tensioner. 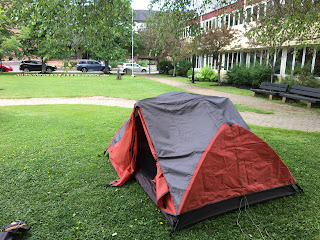 One of the elements I loved about the Lynx was all the guy ropes were on the four corners of the tent, with none in front of the doors themselves, but not so with the Chaos 3, so I'll ask everyone to kindly watch their step when entering and exiting the tent.

I miss the "window" that the Lynx 2 boasted, but I think my girlfriend wouldn't have been so happy with a window in the Chaos... I still can't figure out why not though. I like them on a rainy morning or in the evening when you hear something stirring close by. 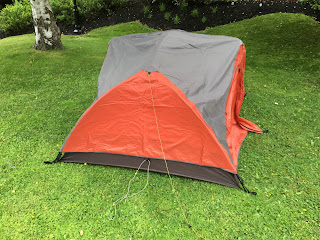 The included gear loft needed to be hung up, and I had to have a do over, as it is a diamond pattern instead of square, and I hooked it up incorrectly the first time. 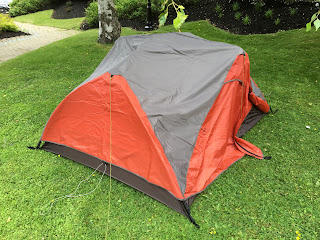 Disassembly and Put away:

It went down fast, and when I say fast, I mean in under ten minutes I had my brand new tent rolled up and back in the stuff sack ready to roll.


If the fly is wet, or the floor saver, you can cocoon the inner tent inside the floorsaver (in thirds) placing the wet fly on the wet floor saver. At your campsite later that night, you may still have a nice dry interior tent. It works well for me.

Would I recommend this tent? Absolutely, but as I did with my Lynx 2, I give it four out of five stars.

I've only spent two nights in the tent so far, so hope to have more for you later on this summer. It goes up easily and performs as intended in hot weather, and seems better ventilated than my Lynx 2 which is what I was hoping for with this design, two days and nights with only a touch of rain, and highs of 30 degrees Celsius in Fahrenheit that is HOT! Damn hot!

Caroline and I did a ride around the Gaspe peninsula on the long weekend, and we ended up inside this tent during a heavy downpour, a couple of nights in fact, and even with the rain fly vestibule open, water didn't get into the tent.

I'm so much more used to the dome tent of the Lynx 2, but this one works even better at keeping me dry, as I can finally leave the rain fly rolled up with out water dripping down onto the floor of the tent. 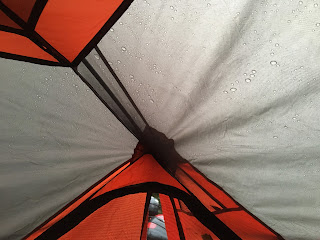 When the initial heavy downpour had subsided, I took a short video of how the rain fly works, and I admit to liking the pale colour as it lets quite a bit of light into the tent, and it becomes easy to see if it is day or night.

Camping season is over for us, but I did want to tell you that Caroline and I brought this with us for a two week tour from the East Coast to Ontario and back. It preformed well, and we sorted out the space issues nicely between the two of us. I began stuffing some of my clothes into the waterproof canoe bag that was left outside which freed up some room, and later on in Grand-Metis Quebec when it dropped down to below 5 degrees Celsius (approx 40 Fahrenheit), it performed well, but clearly is a three season tent, although it doesn't build up as much moisture on the interior as does my Lynx 2 in similar temperatures. My biggest pet peeve after all that use this season? Those darned "pop-out" ferrules at the bottoms of the tent poles, that pop out when you pull the tent pole out of the grommet from the tent itself. *Grrrrr!*