My riding partner was taking pity on my since I busted my Versys a couple of weeks ago, and while I was able to borrow my nephew Tyler's 2016 Scrambler now and again to get out for day tripping, I managed to convince CLine to throw a leg over my sister's Yamaha TTR125 and hit the hay fields with me for some afternoon fun in the sun.

She quickly learned not to stall a kick start bike, and I happily chased her round the field in circles as she gained confidence in the mown hayfield, going through the gears and and finding it hard not to look at the ground while heading into the corners.

Thirty minutes later it was time to teach her how to lock up the rear while in motion, then learn to ride it out and get back up to speed. It would give her a good idea of threshold braking on loose surface, and what you needed to do when the bike starts to slide sideways out from underneath you. She attempted it nervously the first couple of times, then she started laughing out loud as the rear would lock, then slip sideways until she got off the clutch and brake and back onto the throttle. For a time that was all I heard in my helmet, a short pause, then the sound of her maniacal laughter over the Cardo Scala G4 communicator.

Apprehensive at first, but later on a face split with an ear to ear grin, and she was already talking about next weekend. :D

It was time to get her off of the farm and out onto some of the clay roads in the area for some easy puddle jumping and other antics, perhaps the following Saturday over the Thanksgiving holiday weekend?


It took us a while to get into gear, but we finally arrived at the farm, and as my intention was to do some light trail riding, I asked CLine if she would be comfortable on a larger bike, the 2007 Honda CR230L that belongs to my sister Wendy-Sue. It's taller, heavier, and faster on the highway, but also comes with electric start as opposed to Kick start.

We took the bikes around the lower field to get them and us warmed up, then off we went bound for Mill Road where I was happy to roost away taking the lead down the road, and happily splashing through the puddles until I saw CLine doing the same thing behind me. Laughing like a little girl every time the water sprayed out from underneath her tires.

This time out she practiced her rear wheel lock-ups for a bit, then asked me how to roost... Lol. I definitely have to hang onto this girl. She'd gotten the hand of it, and laughed once in a while when the rear got away from her, but she was using the throttle to correct the bike, as opposed to the brakes.


"When in danger or in doubt,

a twist of the throttle will get you out."


Brilliant! This was just what I was aiming for! Street riders find it the hardest to break that habit of hitting the front and rear brakes when they get into a bit of trouble, and on the dirt, a handful of front brake usually equals spitting out a mouthful of dirt and picking up your bike, brushing off your ego and getting right back on that horse that just threw you. You then treat it like a skittish colt, afraid to use too much rein, and I find that it becomes three times harder to take in or try new techniques.

It was a great ride, and easy enough to provide a bit of a challenge, but also enough variety to challenge her control of the bike. I still smile when I think of her hitting all those puddles on Mill road, even that stretch that was about fifteen feet long with a wee rut that forced her to power through it or let the rut decide which way she was going to go. Well done! 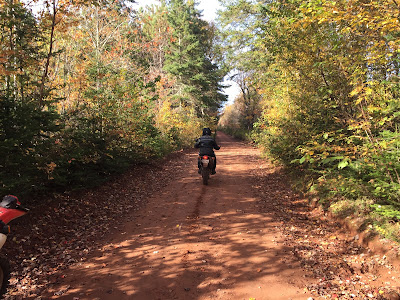 Not quite "Hold my beer and watch this!" but give her some time. ;)

I wanted to give her the option of a street ride on Monday, or back on the dirt bikes, so I arranged to borrow my nephew Tyler's 2016 Triumph Scrambler, but on Sunday night CLine asked if I would mind doing the day on the dirt bikes instead... Not at all! In fact I was hoping she would choose the dirt over the street, for I was really enjoying how well the XR400R was running this fall, and watching the rust flake off my dirt riding skills. In fact, Clinton posted a trial video that demonstrated how to do a rear wheel skid turn, and he made it look so easy and explained it so well that I really wanted to get some practice in on it while the grass was still damp and slippery before I took my show out into a gravel parking lot or some place that a fall would hurt a whole lot more. ;)

I had a bit of trouble getting the XR400R to warm up, due to a choke that didn't want to stay where it was. I so need an umbrella girl to work the throttle for me pre-ride. ;)

We crossed over the upper fields and skirted some fields to come out near Mill Road where I wanted to get some pictures of the fall colours before heading off down the trail.
CLine was familiar with it from a couple of days ago, and I asked her to let me get ahead of her to set a short video of her puddle jumping.

Definitely fun to hear her laughing as she blasts through that, and to see her correct the rear end fish tail with a touch of throttle. Brilliant! 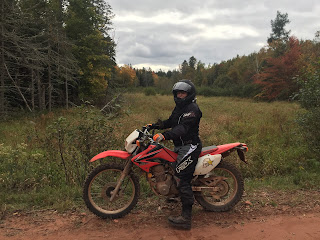 "Stop that! What are you doing! Don't touch that!"


I'm fairly certain that if she could have gotten even her tip toes down on either side, I'd have been riding the 230 for the rest of the afternoon.

Later on during the ride, she asked me how she could roost, and I made the mistake of telling and demonstrating just how to do it. For what seemed like hours she was nailing the throttle spinning dirt and clay back my way, so I had to ride visor down if I wanted to keep up with her.

Time to up her game... I stopped and grabbed a four inch diameter spruce and dropped it on the trail and asked her to come back, then showed her how to bump over it from a stand still, which she did, then promptly turned round and rode back over it on the way back. You gotta love that spirit. 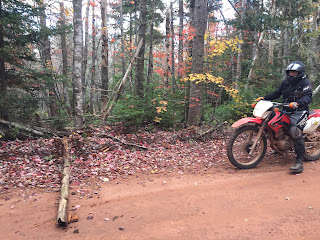 I'd asked her earlier if she wanted to learn how to do a wheelie, but the answer was an emphatic "No, thank you." at the time. Now she was ready for them, and after I told her that she could use them to lift the front over logs, puddles, washouts etc., I got to watch her carefully follow my instructions until it happened... Her front tire lofted all of two inches off the ground, accompanied by that maniacal laughter I knew so well. I had to slow down as she was determined to try them again and again until she had first gear clutch ups perfected!

I stopped recording the video a moment too soon, as her last wheelie was the best visible. Sorry, you had to be there.

You can hear her laughter over my helmet speakers!


Right, here is where I made my mistake...

I'd forgotten that the access road through Brookvale took you up a hill. It sort of stands to reason as it is adjacent to a ski hill... Doh! No sooner did we hit the uphill slope, when I realized that this was a challenge to MY rusty skills! I distinctly recall following Willie up Devil's Elbow back in Ontario, but at the time he was on this bike making it look easy while I tried not to topple off my KLR. I failed, but was very happy to have gotten the bike upright and rolling again before he could get his leg swung off the bike to come help me pick up the big Fugly KLR. With that in mind, I thought for sure that CLine was going to hit three rocks in a row, lose control of the 230 and call me for help, and I was already rehearsing my apologies for bringing her up this crappy section of washed out, rock strewn rutted trail, but everytime I hit a good patch of trail and was able to look back, her head light was still back there in motion behind me until I lost sight of her as I crested the hill! This girl is definitely a keeper! Do you have any wonder why I'm in love with my riding partner? :D


And a few gratuitous wheelie moments thrown in just because I can. You won't enjoy watching them nearly as much as I did popping them. ;)

We put the bikes away and walked down to the house to see Wendy and steal a cuppa tea but they were all away at play, so we drove off to CLine's mothers for a family Thanksgiving supper and an awesome impromptu Cèilidh in the living room. A perfect end to a perfect weekend.

Look for us again this weekend, either gettin' dirty or out on the street... If I don't end up in bed sick as a dog.