An accident involving a deer and four motorcyclists on Highway 404 led police to close the southbound lanes until around 11:30 p.m.
The accident occurred when a deer wandered into the highway near Davis Dr., said Sgt. Rob Michaud with Ontario Provincial Police. One of the motorcyclists hit the deer, which was killed. The motorcyclist was taken to hospital to be treated for non life-threatening injuries, while the other motorcyclists were treated on scene. 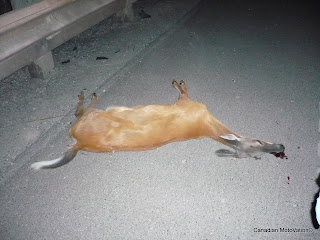