Caroline and I were looking at the forecast for the weekend, and the weather report claimed there was a 60% chance that any riding we did on Saturday would be reminiscent of our Ontario - Yours to Discover, lots of practice doing the roadside rain dance...  But Sunday was looking even worse, and I wanted to see if we had a bit more mileage in us before we had to put the bikes away to attend a night of cards with our friends. 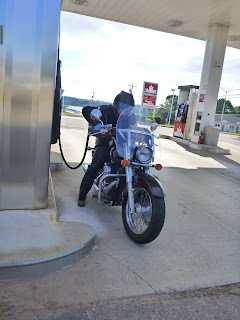 All roads lead to Summerside if you are heading to that side of the island, so we opted to avoid traffic and take some well known side roads to avoid the Trans Canada, but we missed the boat in Kinkora, and ended up behind a dump truck full of rocks just Bedeque and followed him all the way into Summerside where we finally got to lead for a bit and made it to Miscouche where we turned North East and headed up Route 12 which also happens to be one of my favourite Island fall colours routes.

We set off up the road, but only made it as far as Birch Hill before I had to stop and turn around to get some pictures of the "ditch weeds" as Caroline called them just now. 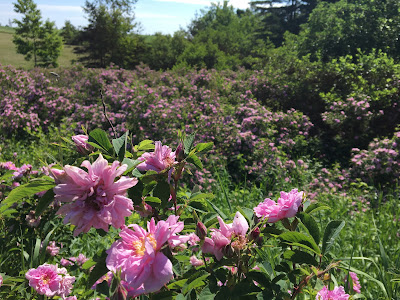 Just up the road is an old church and cemetery, which seems to have fallen into disuse, but there is a new church and graveyard on the opposite side of the road. Does anyone know the name of it? 46.5516694,-63.8733833 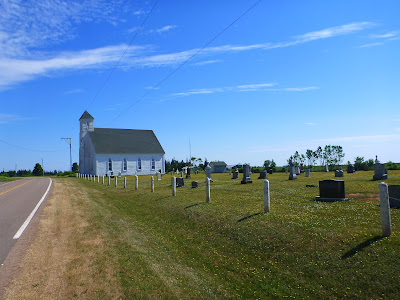 Sadly, at this point Caroline realized that her camera battery was in need of a charge, but we were unable to do this while in the field. She wasn't going to get too many more shots on this ride. 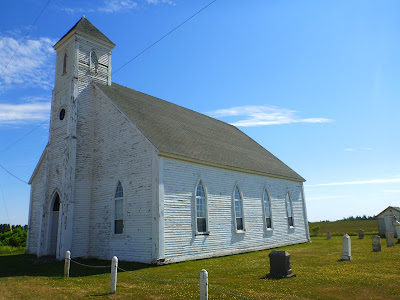 I took this next one just to prove to family that I don't just stop in to use the facilities... :) Sadly she wasn't home, so all I got was barked at by Molly, the artful Dodger and Jake. 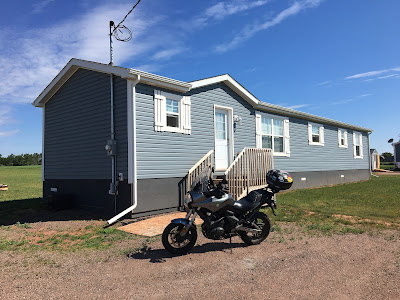 Caroline was quite taken with the carpet of  yellow rapeseed flowers, so we stopped to get some photos of the fields near the MacArthur Shore Road West of Port Hill PE.

Caroline's battery in the DSLR dies here and she had to put it away for the rest of our day, which was a disappointment. 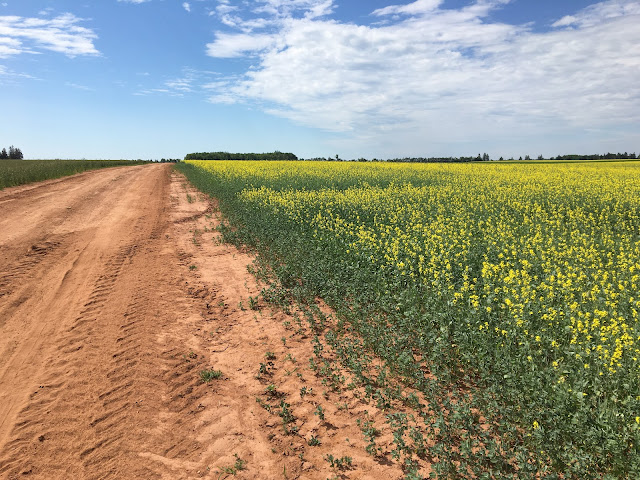 We were drawing closer to Alberton, and our lunch stop in Huntley, but there were some lovely roadside lupins that I quite enjoy seeing.


We had encountered so little traffic on our ride so far, that Alberton took us by surprise, with its busy downtown intersection on Route 12, where we wanted to head North West up 152 into Huntley to find our lunch stop of the Huntley Horizon Take Out, a dairy bar and take out venue that came highly recommended by Caroline's friends. They have more information available on their Facebook Page.

It wasn't a scorcher, but we were very happy to shed our helmets and jackets, and lay claim to a spot of shade by the lilac bushes while waiting for our order. A Barn Burner with fries for her, and a Bacon double cheeseburger with onions for me. I'm going to have to order the single next time, as the burgers are made locally, and very generous portions, so I manged to scarf mine down by deconstructing it, otherwise I would never been able to eat it without wearing a portion. They were fantastic! I've made it another waypoint on my map of decent places to eat. Thanks Caroline!

Leaving Huntley we headed north through Montrose and then entered into Kildare, or what I shall call the first of many Kidares, as the entire area was Kildare this and Kildare that, until we found ourselves back out onto Route 12 courtesy of the 154 and yet another bit of gravel that you need to ride in order to make it on through.

We agreed this round that we'd refuel in Tignish PE, a booming metropolis of 719 souls according to the 2016 census data, where they boast two gas stations side by each, two by two right in the heart of downtown Tignish, then it was back out onto 12 to head ever northward to the cape itself. The road gets closer and closer to the shoreline, and you segue from fields bordering the sea, to lots and parcels of land, and at the cape itself, a gravel access road that lets you avoid the paved parking lot of the North Cape Gift Shop in favour of a short walk/stumble to the cliff edge and access to the beach.

The lack of tourists on the island meant that it was only a few locals taking advantage of the gorgeous day, but we still opted to practice a bit of extreme social distancing to enjoy our own company in a  private little world just to the south. We parked our bikes, then headed down to the water to enjoy the view.

There were many commercial fishing boats out in the distance checking their lobster traps, before heading back to the Wharf, their work for the day done. It always looks like a disorganized dance to the uninformed, as they haul up a set of traps while relatively motionless, clear them of lobster and crabs, re-bait and drop them back down to the bottom before steaming on to the next marker buoy and it's set of traps to repeat. This dance will be all done for the season in a week or two here, but they will be back at it in the fall for Lobster. This year the season started late for them, so it's a bit out of whack due to the plague. 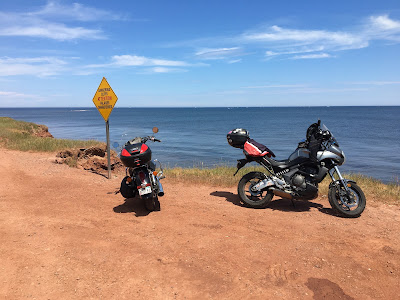 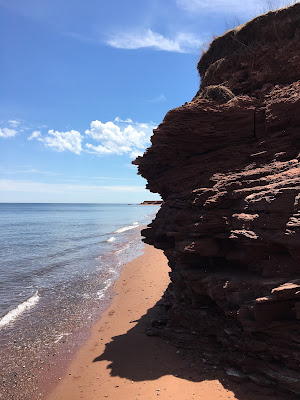 I was having a bit of fun and took a selfie or two before Caroline could get into the shot. Caroline says I can throw this into my POF bank of shots, cause I'll be needing them soon if I keep this up. 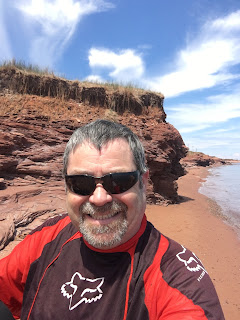 Here is the one that made the final cut. ;) 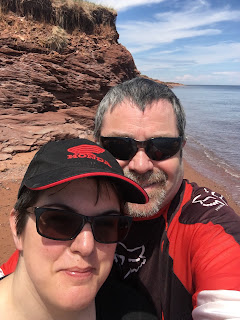 My horizon is awry!!! 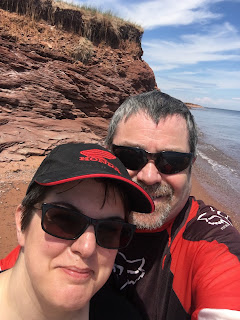 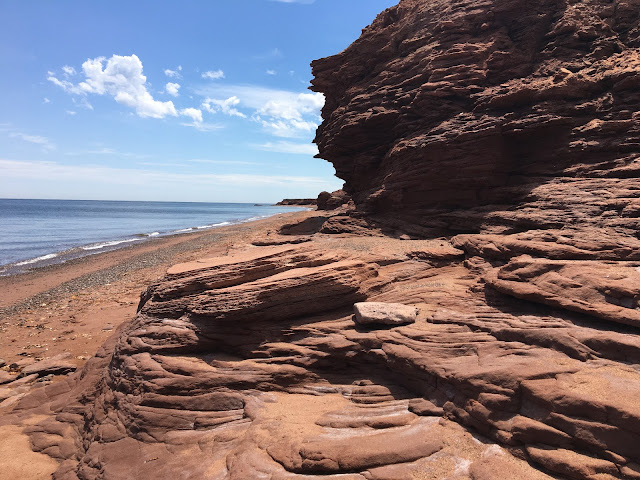 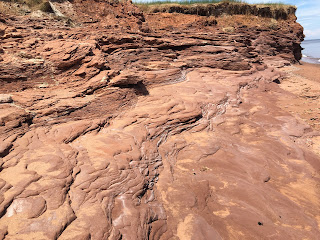 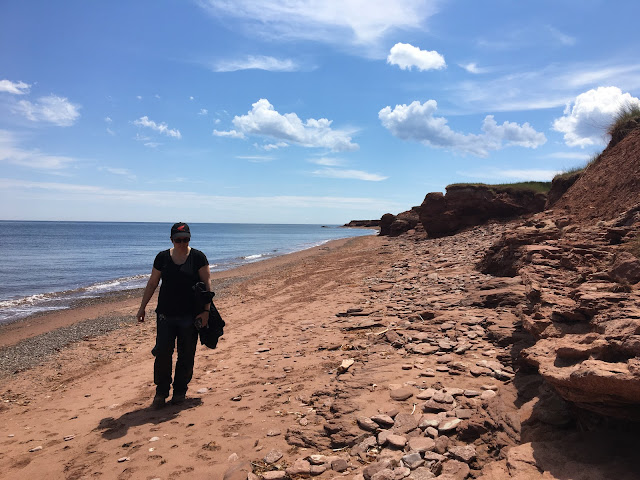 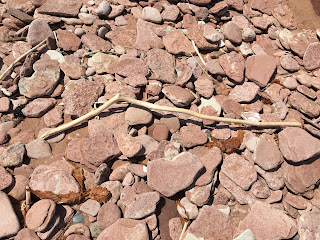 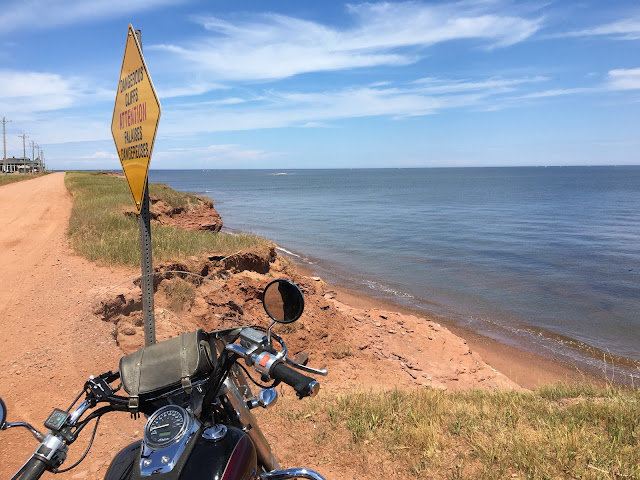 It was time to go, so we threw a leg over and headed south then across Nelligan Road over to Route 14 that we would be following the  western shoreline for a ways before we would have to rejoin Route 2 at the pinch point near Portage PE.

The roads are fun here, with a number of nice turns and some hills with some lovely elevation changes, so after a couple of signed 50km corners that I blasted past, I was a bit worried when I checked my mirrors to find my Shadow was missing, and like Peter Pan, I went looking for it, and was relieved beyond words to find that Caroline had simply pulled over to take this picture of a potato field bordered to the west by a berm worthy of the Emerald Isle itself.


We rode past the Stompin' Tom Centre in Skinners Pond PE, and today I learned that not only is he a great singer, but also led a remarkable life, and was brought to Prince Edward Island by his adoptive parents, who he later ran away from to hit the open road and wander across Canada before he ended up with a paying gig in Timmins ON that would set him up as a professional entertainer. So yes, he did live here for a time, but thought it worth leaving as quickly as he was able to. :D


Just North of Maximeville PE, we rounded a corner to find that the road ahead was partly blocked with emergency vehicles, most notably that of a fire truck, and I'll assume some of the many volunteer fire fighters that make up the fire fighting force of the island. I realized that they had saved the double story wooden structure ahead, but it looked severely damaged. They'd clearly laboured long and hard in this hot weather to bring the fire under control and protect any of the surrounding neighbours and summer homes in the area.

Let this be a shout out to the men of women of the Prince Edward Island fire fighters. Thanks for your efforts each and every day!

We didn't stop for many pictures after that, so you will have to look at some of my other blog posts about riding this side of the island, and with Caroline, it would probably include a proposed visit to O'Leary PE. :D

We took 14 then 11 all the way back into Summerside where we fueled up for the last time for the day, and had a wee break to share a coffee, a cream soda and a Crunchie bar. We just have to make it home to have another great day down in the books, but lets leave the TCH to all those who like to drive really slow, and avoid them by a turn down Blueshank road and take some side roads to get us onto County Line 9 with it's wee bit of gravel portion to get us back onto Kinkora road and in shape
for our final run back into town.

Caroline seems to think she is in need of an adventure bike to do more of this, but honestly I'm pretty happy owning a "Sport Utility Bike" that rarely leaves groomed roads in search of deep mudholes, rope winches and quicksand. Even the Honda CB500x she has her heart set on would be a right ole b@st&*d to pull out of the mud... Hahaha. I love this girl, but I still hesitate to follow her anywhere if there is no cell signal. :P


She kindly let me grab some photos of yet more lupins while heading along on Cairns Road. We'd been seeing them all day long, but they will be gone shortly as they are nearly mature and will fade into memory. For now, they are a constant reminder of how much I love the roads on this island. 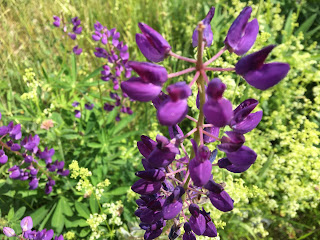 Caroline has asked me to let her know if I spot "yellow" lupins, and as we've travelled all over the Island from East to West, North to South, I have yet to see one I would call yellow. Shout out if you know where we can see some! 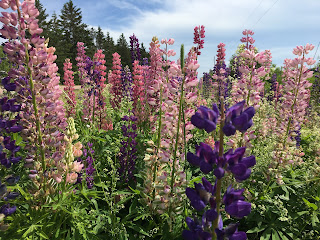 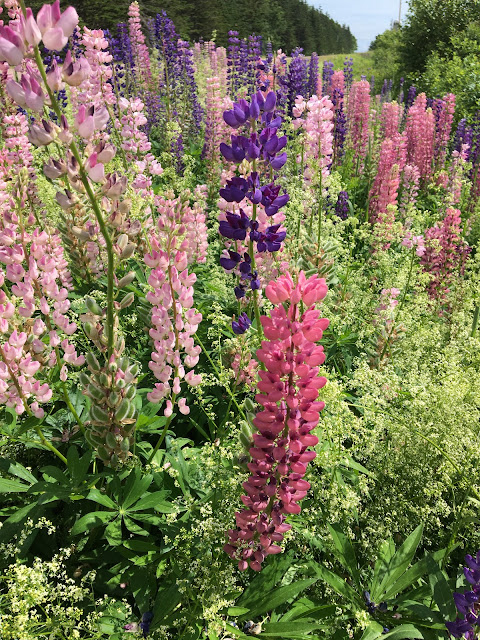 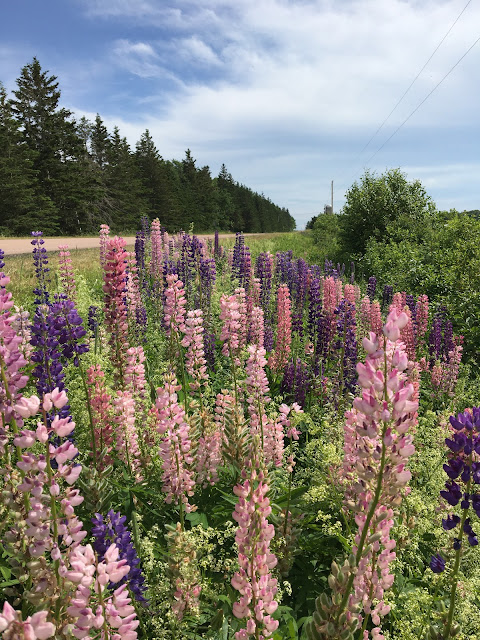 I deviated from the flight path and briefly got separated from Caroline, so I had to use my pass to let her into the parking garage, and got the opportunity for another gratuitous shot of the Wild Alberta Rose as it's called. Consider yourself welcome! 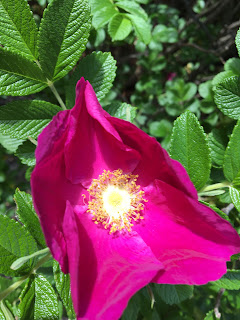 Hopefully our next adventure is off-island with tents and more! Inter-provincial travel opens up again next week I believe.