2019 The Lady & the Tramp do Advocate Harbour NS

This was supposed to have been last weekend, then it got changed to Saturday, but a work commitment made that untenable so we decided Sunday would work. At last! Now it was like a Beatles song as we scrambled to make our departure time of 9am. Who wakes up before ten on a Sunday? Who sets their alarm for 8 am?! Madness!!!

Woke up, fell out of bed
Dragged a comb across my head
Found my way downstairs and drank a cup
And looking up I noticed I was late
Found my coat and grabbed my hat (helmet)
Kickstand up in seconds flat
Found my way to the restaurant, had me cuppa
And somebody spoke and I went into a dream...

Clearly Sir Paul has nothing to fear from me, but we did manage to get off the island by 10ish. Perhaps I should have explained "Lazy Sunday" in more depth. Clearly I was holding CLine back, but as she paid for the meal, I thought it behoved me to try to keep up with her. (Behoved... I thought it was spelt "b-e-h-o-o-v-e-d" so I was going to tie this in with a cow joke. Darned spell check!) 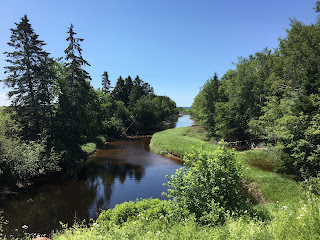 I managed to keep up on the Confederation Bridge, and at the end of which, we took a run into Cape Tormentine and down Old Ferry Road where I found that the SDCard in my camera was malfunctioning with write errors, so CLine gets Photo Credit for all the Cape Tormentine photos.

Why did I add The Lady & The Tramp to the title? We invited friends to join us, and the conversation got round to sharing ice cream, and I mentioned that I thought of CLine and myself as united by a passion for ice cream, motorcycles and dogs...

That was actually a bit of a shock. I just calculated the kilometres via google maps, and thought "That has to be wrong!" but it was right on the money as a one way via the direct route is 218 km at 3 hours. Hmmm. That might explain with all our stops why it took from 0900 to 1800 on the motorcycle to get where we were going. Just for giggles here is a stop breakdown:


Do you think I take too many pictures? I could have taken a ton more after lunch, but as my brother Shaun is visiting on the Island from Barrie Ontario, we had to get back to the Island via a direct route to spend some time with him at my sister's place in Stanchel. That list comes as a bit of a shock, in fact it drew CLine's attention the very first time she read this post!

It might have been a mistake to wear a mesh jacket today, as crossing the bridge over to the mainland was chilly, but bearable. I could see the need to have an extra layer if we got caught out after dark, but it was a beautiful, cloudless day, and CLine and I were enjoying it.

She asked if we could ride down the other side of the peninsula through Cape Tormentine as opposed to Murray Corner on 955 that I usually take. "No way!" I said, but she ignored me and kept on going, taking the left at the top of the ramp instead of the right. "Alrighty then." The thing to do here was to follow her as she rode out to the old ferry terminal that used to be served by the Motor Vessel (MV) Abegweit (1947 - 1982) and other ferry vessels until it was replaced by the fixed link Confederation Bridge completed in 1997. The Abegweit Passage is 13 kilometres to the Port of Borden on PEI, while the completed bridge spans 12.9 kilometres from Borden-Carleton PE to Cape Jourimain NB.

Prior to the Car/Rail ferry service that started in 1917, the island was served by the Ice Boat crews from 1827 to 1917 for mail to and from the Island in all seasons.


When you leave the terminal and head further East along NB 940, you pass the old railhead or perhaps I should have called it "rail bed", that used to serve rail cars boarding the ferry to head over to the island. Similar to PEI's rails, the rails and ties have all been torn up and nothing remains but that signature level bed with a gravel path atop it, running straight as an arrow back out towards Port Elgin and perhaps Moncton NB?


Both CLine and I did a double take when we saw this. Great minds think alike, and fools put on their indicators and pull over, waiting for an opportunity to do a U-turn to take pictures of this beast. She made me do all the dirty work taking the photos as she sat on her bike patiently waiting for me. 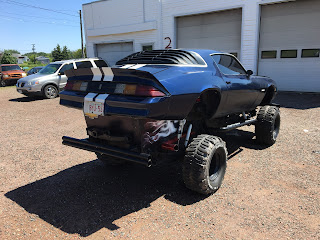 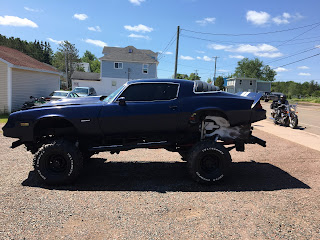 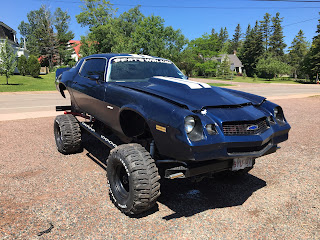 So much for Port Elgin NB, and Baie Verte for that matter, as we felt the need to keep going, and we've stopped before for the parkette in Baie Verte, check out our 2018 excursions.

Amherst NS is a good place to fuel up for the last time before heading out ot Advocate Harbour, especially if you bike is fond of premium fuel, so we usually gas up and pit at McDonalds (I like their coffee). While sipping our coffee we noticed a pickup with three dogs on board, and when Tammy took out Bean and Sprout, two long haired dachshunds, I told her that they were very much like my sister-in-law's Scout and Annie back in Ontario. When I asked where she was visiting from, she dished out the "Toronto" that most Ontarians use... I was guilty of it myself before I smartened up and moved out East, so I laughed and asked Etobicoke? Scarlem? Mississauga? To which she responded "Alliston". "Really?! I used to work at CFB Borden and my brother Shaun works at the Honda plant there!" And wouldn't you know it? Tammy and Adam work for Honda as well. :D


Tammy still wanted to see more of the East Coast, but Adam was tired and ready to call it a done deal, and hit the Transcanada again to book it back home. Hey Tammy, if you make it out to PEI looks us up. My sister's couch is a pretty great bed and breakfast with hot and cold running dogs. :D

CLine and I both love dogs, so we spent a bit more time here than budgeted for, but who was counting?

The Bridge on 2 south of Amherst was out again this year, so we detoured through Southhampton and back onto the 302 South that would take us into Maccan where we would turn onto the 242 and on into Joggins NS 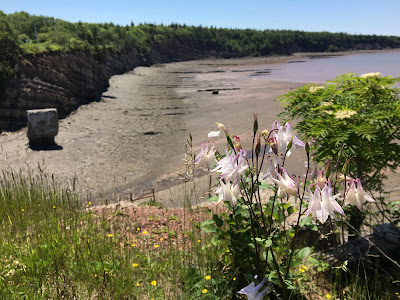 Now it was time to get moving and make our (late) lunch in Advocate Harbour NS. 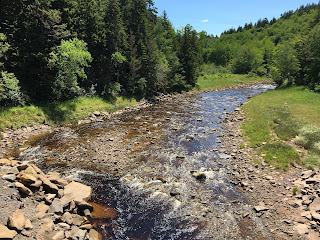 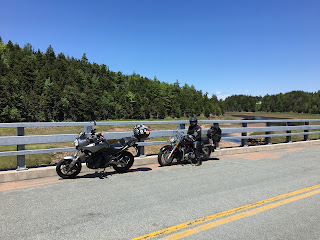 Our friends on the island will tell you (Jamie, this means you) that the Joggins Road 242 is pretty busted up. He and his fellow riders even give it a complete miss and ride into Advocate there and back again from the Parrsboro side. I find that I can ride these roads, but I slow down and average about ten over posted through much of this, and a bit slower when the road looks like this. Call it 8 kilometres of bad road that you need to slow down for, while the remainder is in decent shape. I took some photos to illustrate what you will see.

You head inland as you travel further from Joggins, but the road will bring you back down to the coast to cross the East Branch Apple river, across a single lane wooden bridge. This is the only warning sign you get from the Joggins side, and it is THE ONLY BLACK CHECKERED WARNING SIGN on the road. Slow the frick down, as it leads to a quick right, then left (across the gravel strewn road) on onto the SINGLE LANE BRIDGE. I figure they should have marked this as a 30 kph corner due to the tight corner, the gravel and the queue for the single lane bridge.

When you rip down that road, you will see this gravel washed out across the road. Try applying your brakes here, go ahead, I dare you. :P


I wanted to get a video of Caroline doing the bridge, and I asked her to focus on doing it safely as opposed to how I would have done it on my Versys with a video camera pointed my way: "HMBAWT"

After watching the video, she said "I chose the wrong gear. I guess I could have dropped one, rode the shoulder and roosted you with gravel. "

Straight on to our lunch stop, at the Wild Caraway Restaurant in Advocate Harbour NS.

It has a large patio with picnic tables, so as always we opted to sit outside, and I made certain to ask for more of their signature rolls with butter. Today's not so secret ingredient was truffle, and they were delicious!

CLine had these fish cakes last year, and I was very happy she shared them with me, for while I enjoyed the roast beef sandwich I had ordered, I found I was nibbling her fish cakes and beans with onion pickle far more than my sandwich. (She traded part for half my sandwich!)

I talked up the fish cakes so much a couple beside us visiting from Dieppe NB ordered them as well, and didn't seem to be disappointed at all.


After lunch, we agreed that we would have to keep moving at a decent pace in order to meet up with Shaun and Doris at my sister Wendy-Sue's house, so no more pictures, sorry. We had a grand day out, and even managed to learn something new about each other's riding style.

I can hardly wait for next weekend... Or for riding the bikes to  work tomorrow for that matter.