2021 The Lupins are out on the Island

You don't have to weed Lupins, in fact, Lupins are weeds here on Prince Edward Island, and in June they can be found growing where the plows and lawn mowers can't reach them, so our ditches and roadsides become a sea of Lupins for a short period of time, but it's a beautiful time to be a motorcyclist as the weather and the scenery is breathtaking. 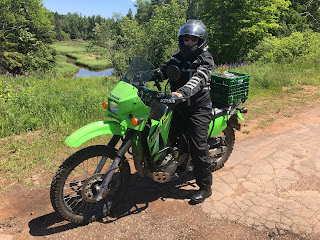 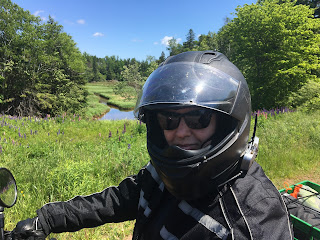 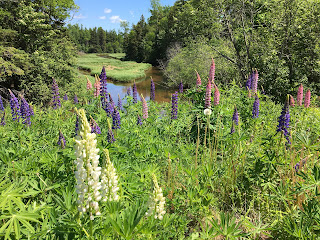 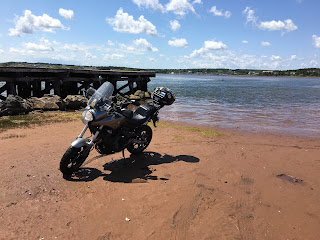 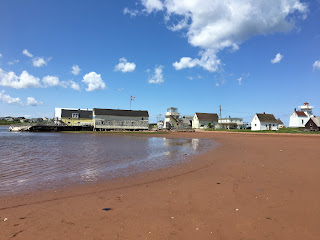 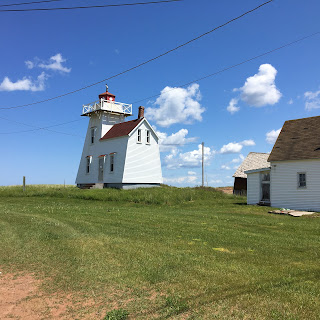 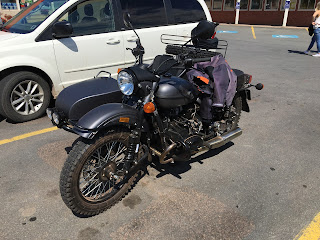 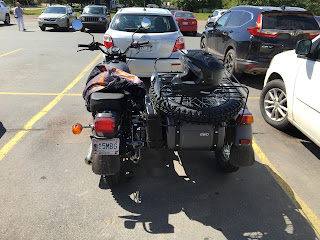 If you didn't already know, I'm a bit of a stove nut. No really. Anyhow, this fella was advertising an old Coleman single burner classic on USED PEI, and he was only asking five bucks for it, so I figured it was broken or suspect. Anyhow, I wanted one, so I jumped in with both feet and said I'd buy it, before realizing that he was located not in Charlottetown as I had assumed, but in St. Louis which is only 138 kilometres away up West. **Sigh, that is only a 276 kilometre round trip if I stuck to the fastest route, and you know that wasn't going to happen.

Well, once I'd apologized to Matthew for asking him to hang on to it for me until the weather turned for the better, it was another three weeks before I headed up to Crapaud and the Red Rooster Restaurant to meet up with Caroline for a late breakfast to start what would be our first full day ride of the 2021 season.

Caroline was eager to show off her new upgrade to the KLR, a lovely green milk crate zip tied and roc strapped into place on the back end of the bike, already carrying a few bits and pieces that would see her through the afternoon ride up West. She was really quite pleased with it, possibly as it appeals to her quirky nature and it is considered a very red neck accessory, not sold in stores. lol. She is a keeper!

As it was only the second week of May, and that is usually still plenty cool if you are idea of fun is sitting on a motorcycle for a few hours. We both made sure to gear up for the weather, and headed out, bound for Miscouche the fast way... Straight along the Trans Canada highway. until we hit the center of Miscouche, and turned West onto Lady Slipper Drive, and out to the coast where we were going to follow highway 11 as far north as it would take us.

I used to be able to drop my feet off the pegs of my KLR and ride like this without hitting the ground. I'm sort of envious at the moment when I saw Caroline doing the same. 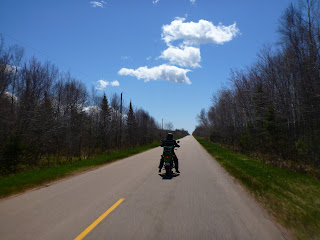 I won't bore you with the details, but the riding go a lot nicer past Miscouche on on 11 North, but the road is still a bit busted up and I found I was scanning for pot holes ahead as much as I was enjoying the scenery, although I suppose I was still running a bit too fast, and simply enjoying the day. Okay then, slow it down and take it easy!
The KLR was having no trouble keeping up to me, and I really enjoyed following the coastline, and the curves of the road, even though it slows as it goes through some of the smaller towns.
We took a moment to enjoy the view and let Matthew know we were in earnest and on our way up to see him. (sometime this afternoon).


I love this old derelict of a boat out by the roadside. I think I've stopped three times to photograph it. 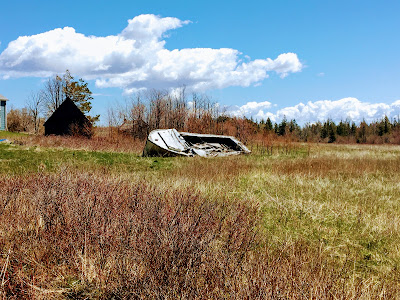 You get stuck back out onto Route 2 at Portage PE where the island pinches in a bit, sort of a corset hereabouts, with the good bits elsewhere, like the road to Alaska PE! Caroline has been down this road on her Shadow while there was a good inch or so of mud, and the only dry bits were the tracks of the previous truck that had cleared some of the mud out from under the tires. Today was EASY in comparison, and her speed was a lot higher here. I had to catch up to let her know I wanted to get some shots of the bike on the dirt road. 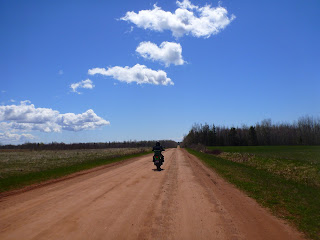 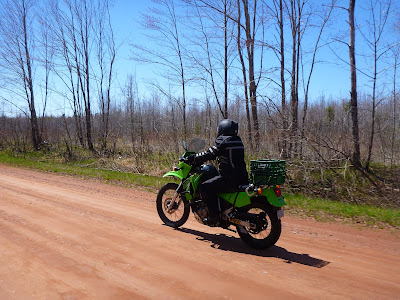 Alaska is civilized and shows you a paved road at it's North end where the Beaton road crosses over Beatons Creek. 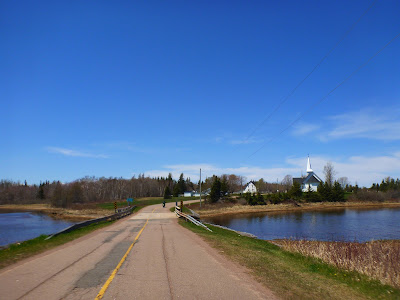 Caroline and I have some adventures out this way in Brae Harbour from last year or the year before. Wow, that was 2019, so a couple of years back, but today we were on a mission and headed on up the road across the Brae river and on up into Colman. A lot of Caroline's family come from this area, from her mother's side. 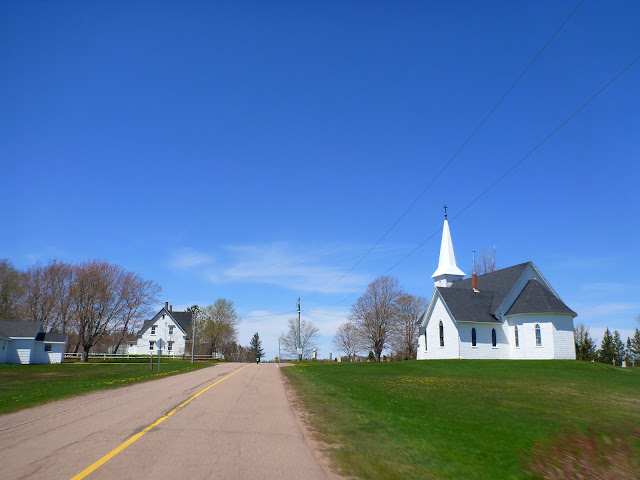 We shot back out to Highway 2 and headed North again, and arrived at the roundabout that said O'Leary is that a way, but I wanted a nice hot cuppa, so pulled into the parking lot beside a couple of cruisers and headed inside for a pee and a tea. AND a New York Cheesecake. I bought one for myself, and later on was terribly pleased that Caroline ordered a coffee and a donut all to herself, for one bite of this donut told me that it was wroth the premium $1.99 as a Saturday afternoon treat, soaking up some sun while sitting on the Tim Horton's patio. And yes, after three years of riding with Caroline, I finally got that tea she promised me! (But the joke is on me, as I paid for it.)

So I sort of challenged Caroline in the parking lot, and I taught her how to spin the KLR on it's kickstand to make those quick getaways... with a caveat of course... "Don't do this on a driveway if you like the owner." It's a bit harder for her to shift five hundred pounds of tractor, I think possibly because she isn't nearly as efficient a counter weight...

Um, yeah, so speaking of donuts, did I mention that I'm trying to lose some weight as well?

Part two of the challenge was to hop the KLR over a conveniently located curb. She could even choose which height she wanted to bump over, completely optional and I was very pleased when she grinned and bumped her way over her first curb. LOL. Hooray! 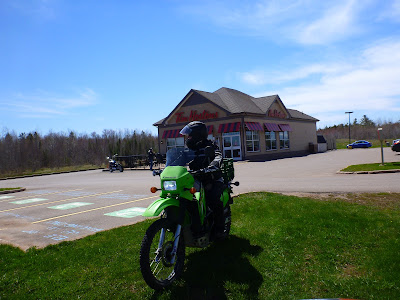 Right, I have to run orf and get some supper. I'll be back to finish this later! Cheers!

After our coffee break I got in touch with Matthew again, when he asked me to stop short of St. Louis and meet him just up the road at Profits corner. No worries, it's a short hop away and we met him in the parking lot of the Church of the Nazarene where the money and the stove exchanged hands. I paid a bit more because I felt so guilty taking up so much of Matthew's day with my adventure. It made me feel better.

This is similar to the stove I bought off of Matthew, although mine shows a bit more rust and love.

We now had to visit Summerside where Caroline wanted to get a couple of things done, so we shot over to Dock Corner on Dock Road PE 150, then headed south along 12, a familiar route that would run us past the homes of a few more of Caroline's family. It dumps you back out onto highway 2 for a spell before you can head back out to the coast again and wander your way along a lovely stretch of the island. I love doing this route in the fall when the colours start to turn. 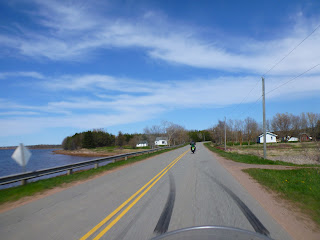 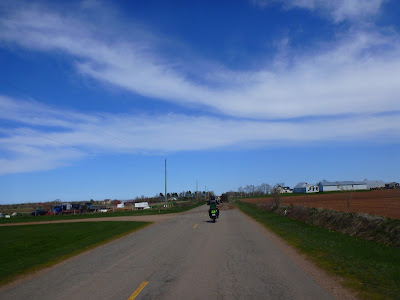 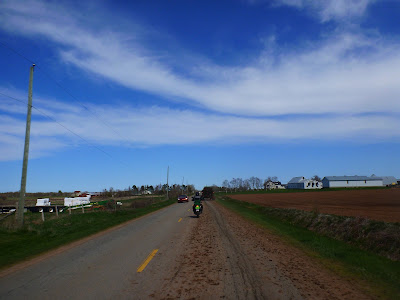 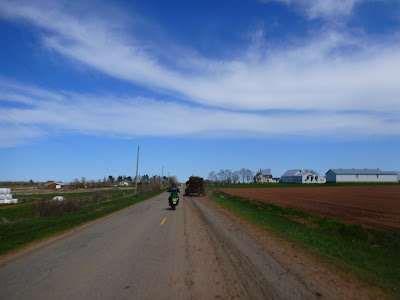 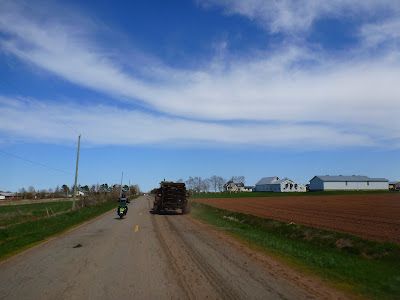 I tried to stay well clear of the brown stuff when we were passing this gentleman and his precious cargo.
I still get roasted over not taking Caroline's photo at Kelly's Mountain on Cape Breton Island, so to make up for it, I pose her now and again at signs along the wayside.


Summerside was a dash into Canadian Tire for some vacuum cleaner bags, then around to her friends house to pick up some market lobster for supper that evening, and we left Summerside along the Blue Shank road, then made our way into Freetown, then across the Newton road and onto County Line road south, that would put us back onto a bit of gravel... Photo opportunity! 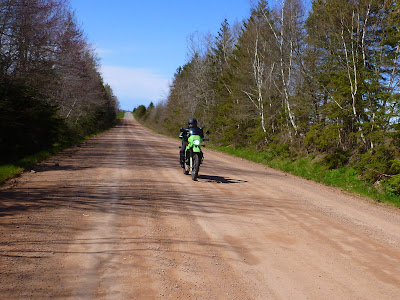 Did I mention that I sort of live in fear of the day when she heads down a road that I follow her on... The KLR is a lot more capable in the rough sloppy stuff than the Versys can ever be. So far so good.

A brief stop at the homestead to regroup and reload, then it was off to Mom's place for supper. 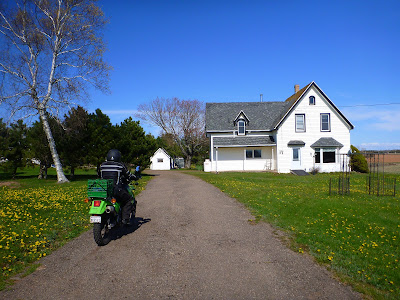 So I'm not big on shellfish, in fact, I tell folks that I got most of my fish out of a blue box that had "highliner" on the label, but back before they invented minced fish, or pollock/sole. :'(

Yeah, so I'm not much of a lobster fan, but I can appreciate that others like them almost as much as I enjoy fresh island beef. I'd dropped into Gass's General Store on the way over, and got a couple of last day sale pork chops, some fresh mushrooms and a wee porterhouse steak. While they were busy scarfing down the lobster, I had dressing stuffed pork chop and a wee beefsteak.
There is more to this story, oh, so much more... and I've been permitted to present a redacted statement of events for your perusal, immediately following the end of my shopping trip into Gass's General Store. 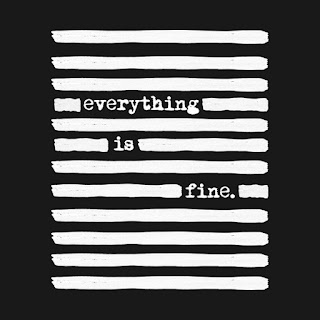 ...and that is how she dealt with dropping her bike, and I'm to speak no more of it.

That was it, but for to ride back to Caroline's house in the dark, although watching the sun set was a lovely experience. 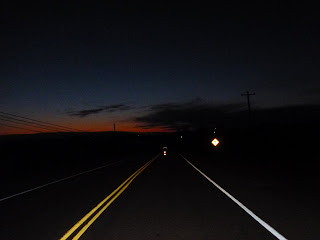 So Sunday was a four wheeled adventure for Caroline, while I opted to mess up her system by sorting out her tools and throwing them will ye, nill ye into that red box behind her. ;) 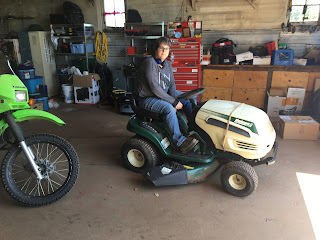 I hope your weekend was at least as much fun as mine! Stay tuned for adventures in plumbing! ;)