My brother Shaun was visiting the island, and he made arrangements to borrow my sister Wendy-Sue's 2010 Triumph Bonneville for a ride ont the island, so Caroline and I invited him on a wee ride out to Canoe Cove then into Charlottetown for the Red Isle Riders weekly event known as bike night, which we use as an excuse to get out and ride, then meet up for supper and some bench racing and tall tales.

Caroline had the great idea of having us meet up at Kelly's Cross for 1800, which is just down the road from my sister's place, so convenient for Shaun and my sister's two boys, Ryan and Tyler who would be riding with us.


Of course it turned into a wee family reunion, especially when my sister and Shaun's wife Doris pulled up in the Jeep to say hello before heading off to Victoria for supper. 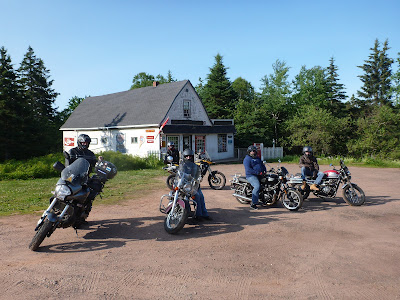 From left to right,

Wendy's bike is the loudest on the parking lot. :)

And we rolled out of there and headed across on 246 aka South Melville Road at a sedate pace, then crossed the Trans Canada Hwy in De Sable and jumped onto 19 that heads past one of my favourite parks, The Argyle Shore Provincial Park (visit this at low tide) through Canoe Cove and on past Nine Mile Creek Road and on out to Rocky Point to the site of Fort Amherst.

From 1720 to 1770 Port-la-Joye, later named Fort Amherst, served as the seat of government and port of entry for settlers to the island while under both French and British control. As such, it played an important role as a colonial outpost in the French-British struggle for dominance in North America."

In fact, Prince Edward Island would still be known as Ile Saint-Jean if the French had not lost Fortress Louisbourg and later on Port-la-Joye to the English and New England irregulars (militia). Imagine what the Island would have been like if the French and their Mi'kmaq allies had successfully defended their settlement and fort? 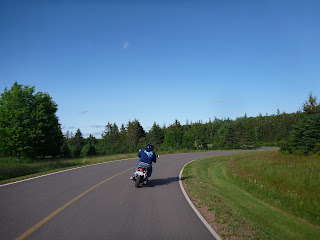 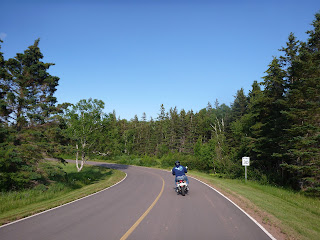 There were two cruise ships in the harbour today when I got off work, almost doubling the downtown population of Charlottetown, or so it seemed to me as I rushed home after work, and now they were both leaving and heading off into the Northhumberland Strait and away from the island. You can see why this would have made an excellent site for a battery of naval cannon...


Caroline was gracious enough to ride out ahead of us and grab a wee video of the extended family ride...

And, it was time to let the the fast group head out while the slow group took our time getting to the meet.
We headed in through Cornwall on the Trans Canada Highway, did a couple of roundabouts, and on into the parking lot at Boom Burger on the causeway to join the already large group that was there. I pulled in behind Mark's Ducati and Derricks Triumph Thruxton, and decided I needed to get some photos before heading in for supper with Shaun and Caroline. 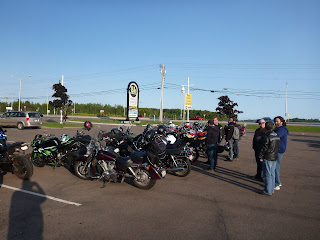 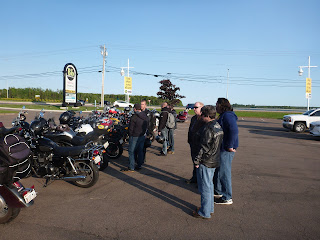 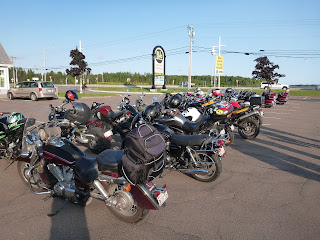 It was off to Boomburger for supper, then Shaun treated us to dessert at Cow's Creamery across the way.

By the time we got back out into the lot with Kyle in tow, everyone was gone but for Tiffany, Jason, Kyle and our featured stunter who put on a wee smoke show for us as he left the lot on his 2017 Ninja 636.

Wendy-Sue and Doris showed up to see how we were doing, and as it was getting later and cooler, we waved fare well as they headed back to my sister's place in Stancel, and Caroline, Kyle and I tore up a couple of roundabouts on our way back into the city, with Caroline's Shadow throwing sparks as she set the pace for us. 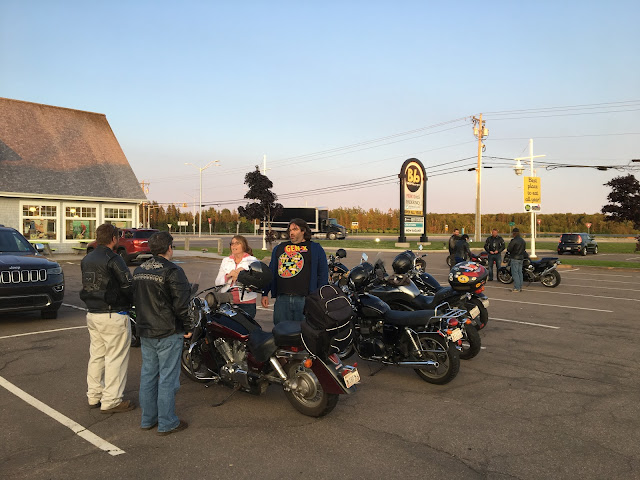 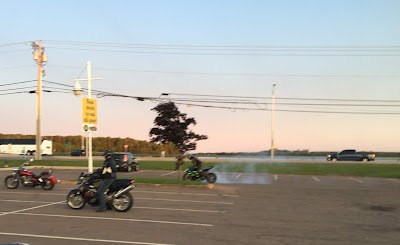 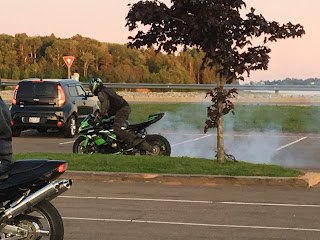 It was a great night to be out and about, and I'd like to thank Jamie and Ryan, and the Red Isle Riders for organizing it.