Seeline and I were determined to get out and go for a ride this past weekend, and we came up with  a ride along the Sunrise Trail in Nova Scotia, perhaps even as far as the Cape St. George Lighthouse, then the Pictou ferry crossing back to the island, but after breakfast and a cuppa, we found ourselves caught up in another Island Exodus to the mainland!

And when we hit the Irving at Borden-Carleton, the lineup for the Confederation Bridge toll plaza was so long, that it was backed up right through the lights there! 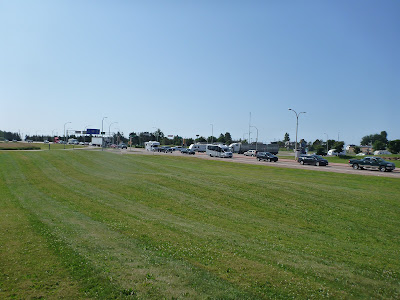 There is simply no way I want to be a part of that today. 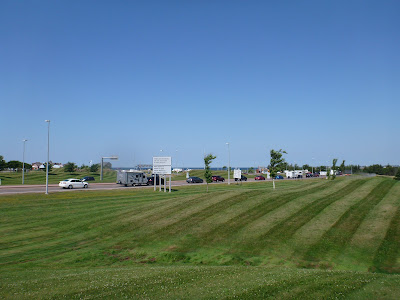 I'm not used to being caught in the act:


It was a no brainer, we just needed decide whether it was going to be a ride Up West or or Down East or Friggin' Cavendish... Her conscience must have been bothering her as she suggested we hit up the O'Leary Tim Horton's where she was going to finally buy me that tea she'd promised me about ten months ago, the weekend we first held hands and started parking in the same spot together.

And it was off through Bedeque and out into Summerside where we cleverly avoided the construction (Constriction) up on Highway 2 and Granville by heading through the center of town and heading out to Linkletter via Highway 11 which follows the coast and runs past Miscouche on the south end. It's a lovely little road that winds it's way along the coast for some time, but eventually it kicks you back out onto Route 2 at Mount Pleasant, but we like riding to Alaska so left the highway in favour of the Beaton Road that runs up through Alaska PE and on into Brae.

I can't figure out if that is a drone, seagull or mosquito captured in the picture above. :D The last time we were on this road, there was about an eight inch dry track to ride down, as it had been raining and the road was covered in about an inch of mud but for the two dry tire tracks down the road.

We were just entering Brae when Caroline asked me "What is down that road?" indicating the Brae Harbour Road to the south, that was paved but in fair to rough shape for most of the visible distance. Quick with the repartee, I toss out "The Harbour, I think.". With that I turned off the main road and headed on down it, comfortably flanked on the left with hydro poles, which to us, meant that there may be some civilized people out this way. Google calls it "Hwy 170, Coleman PE", but they are optimistic at best. Still, someone had come down this road and graded it recently as there were no weeds at all in the spoil, and it was still loose, so maybe one or two light rainfalls? I figure it was done within the past two weeks, so there were no potholes, just deeper sandy patches and a bit of buildup of sandstone that might give you a jolt or roll out from under the front tire.

We found out that it was basically used as an access road for some cottages, and trailer sites, as well as a public beach further East. A beautiful bit of coastline with shallow beaches. 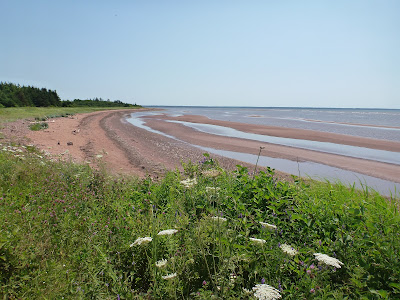 Caroline and Google Maps were determined that this road met up with another and would cross a bridge then take us back into Alaska just about a kilometer and a half to the north, but if it was there, it isn't anymore, and all you will get is grown over bush with no sight of an older road. DEAD END, again. 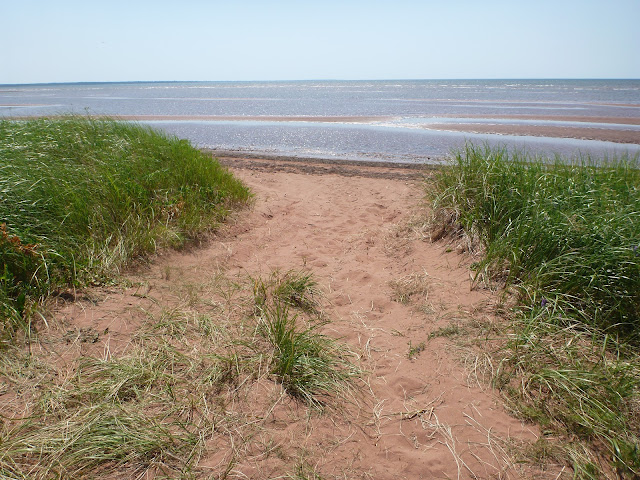 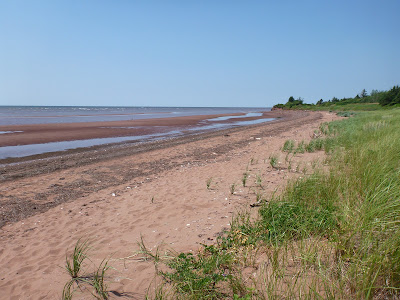 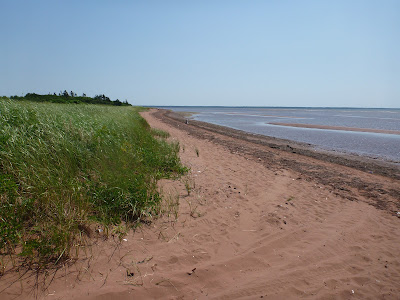 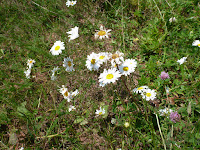 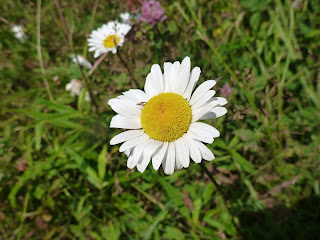 So it turns out that I am not the only one who admires the bike that they ride. :) 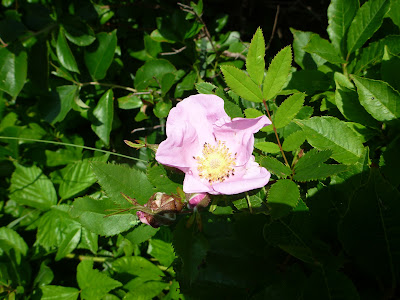 Once we hit Route 11 we were back on familiar ground, and in a short while we'd meandered our way up and into O'Leary where Caroline's grandparents used to live, and she still has a number of family in the area, so I got a wee guided tour over the comms units as we closed in on our destination of the Potato Museum, as Caroline had heard good things about their restaurant, so we parked the bikes and wandered in to have a look through the gift shop, and finally at the menu. Caroline wanted to sample the Lobster Potato while I was interested in the Classic Poutine, with bacon added as an additional topping.
The poutine for $7 is so large that you really should be sharing it. After eating the poutine, and sharing the seaweed pie, I nearly slipped into a food coma and fell from my chair to the restaurant floor. Now I know why my riding jacket is becoming so tight this season. :'(

The chips were freshly cooked to perfection! Fantastic, to finally be able to taste them fresh from the fryer as they should be, a real game changer.


We were discussing the seaweed used in milk such as Carageenan, when Caroline said it was "Irish Moss" that used to be harvested on the island, until the shoal waters became polluted or contaminated and you could no longer harvest food safe Irish Moss for consumption in the waters off of PEI. It is an industry that still employs a horse and human to wade the surf and dredge up the moss. Wikipedia has this to say about Irish Moss:

"is an industrial source of carrageenan, which is commonly used as a thickener and stabilizer in milk products such as ice cream and processed foods, including lunch meat. It may also be used as a thickener in calico printing and paper marbling, and for fining beer or wine."


"Irish moss (Chondrus crispus) is a small seaplant that looms large in the make-up of many of our favourite foods and useful products. When we consume ice cream, chocolate milk, salad dressings, beer, or use insect sprays, water-based paints, shampoos, toothpaste or cosmetics, we are almost certain to be using carrageenan, a starch-like, non-caloric substance extracted from Irish moss. Irish moss is a perennial plant with many branches near the top. It ranges in colour from yellowish green to brown to reddish purple, and grows attached to rocks to heights of three to seven inches. It is found from the low tide mark to approximately 30 feet of water.

HistoryThere are two methods of harvest: by drag rakes or by gathering storm-tossed moss along the shoreline. The harvest is taken by drag rakes towed behind boats. Large quantities of Irish moss, sometimes mixed with Furcellaria, are washed ashore during gale force winds. This storm-tossed moss can be gathered either by picking it up from the shore or scooping it from the tidal wash with handrakes or with baskets towed by horses. Prince Edward Island has a long established history of seaplant harvest. On Prince Edward Island, the industry is centred on the western shore of Prince County, where the largest production of Irish moss is harvested and local buyers have drying and packaging plants."

And now the bad news:

So you probably drank some seaweed in your coffee today, or had some with dessert last night in your ice cream cone, but it was probably not from Prince Edward Island.

It was time to climb back into the saddle, and continue the trip, but please take note that we never made it to Tim Horton's where my cuppa tea still waits. One day I'll call her on it...


O'Leary has a "Only game in town" Shell station, so we sat in the shade waiting for the pump lineup to thin down, and chatted with an older gentleman from the area who used to ride, still has the bike, but can't manage it at the moment. I have a lot of respect for these guys, as I figure one day I'll be doing the same thing, only able to chat about riding as opposed to doing it. Caroline was apologetic that there was so much dirt on her bike, but he countered with "A dirty bike runs just as well as a clean one!" and I bet you have more fun getting it dirty too, I bet.


It was time to start heading for home, but rather than take the highway, we opted to follow Highway 12 south, or so I thought, until Caroline turned onto Canadian Road aka 168 just the other side of Foxley River, because she wanted to see the end of this one too. I got to follow along in her cloud of dust.

Gulf Island Peat Moss harvests Peat Moss from an area just to the north of us on this road, and it looked like a brown barren landscape. Google satellite shows it as a manmade scar on the island:

"P.E.I.'s peat moss industry harvests and ships millions of kilograms to countries around the world"

Caroline was busy taking some pictures, then I grabbed a short video of here riding Canadian Road back out to 12... Some prompting of the actors was required, but due to a technical error, was never dubbed out in editing.


My friends have always taught me that a video is always an excuse for "HMBAWT"... :D

Time to head back out to the main road and head on back home.

Caroline decided to take us on yet another one way adventure, but to be fair it was heading East, on 163, and we ended up riding out onto Lennox Island, a Mi'kmaq community, doing a u-turn right in the middle of town and heading back out to 12.


Back out to 12, along some fabulous coastal roads, straight on through Miscouche and Linkletter again, Summerside, then a bit of misadventure again that kicked us out near Dunk River when I was trying to pilot us to Kinkora, but we managed the Kinkora road, and on into Charlottetown to end the ride.

Both bikes are covered in dirt, and Monday night's plan is to hose 'em off and love them a bit.

See you next time!