Yep. I'd completely gone and snapped off my sidestand. It's tough to see from this angle, but my bike is loaded down for touring with givi cases and a tent strapped across the back seat, and earlier at the racetrack I'd snapped the bugger clean off near the attachment point on the frame.


There was no choice but to toss it and the spring into my top box, and choose nice parking spots on my way back to Prince Edward Island where I posted on facebook that I'd trashed it, and my friend Ib Ra Him suggested that I try to get it welded...

Bingo!!! I chatted with my nephew Ryan and set up a meeting with him at 3 pm that afternoon...


And we head on up the garage where he uses the light duty MIG welder to tack it together, but with metal that thin, he shot a couples of holes into it, and had to be careful to build them back up and close them. 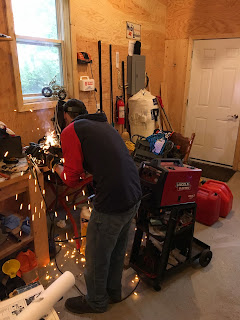 "That'll work until it doesn't."

With a rattle can, I was able to pretty it up a touch, and now it looks better than when it was on the bike last week. 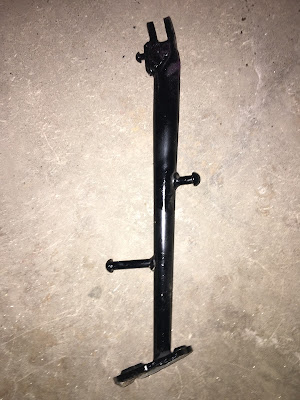 Okay, I was hoping for less excitement during installation, but here is what happened... I bolted the sidestand back on, and used the thin locking nut to make sure it was going to stay there. THEN I tried to hook the spring over the sidestand, but with only one person and a pair of needle nose pliers it was just too much and I had to admit defeat.

Once more I turned to the Kawasaki Versys Club on Facebook for answers, and one gent said he simply hooked the spring first, then levered in the bolt. Okay, I gave that a good college try and managed to bugger the internal thread of the kickstand. Not his fault, it was mine and I tried to clean it up with a file, but it really needed a tap to clean out the damaged portion of the kickstand. Darn it. I needed to source a metric tap, but mine was thirty minutes drive away and I had no clue if I had the correct size, as it was weighted far more to the SAE side of threads, so I had no idea if it was going to work at all! I had my doubts.

Caroline and I were supposed to join a party for lunch in Victoria by the sea at the Lobster Barn there on the wharf around 1100, so I was eager to head to Shane Bolgers to pick up my bolt for the lower engine mount that was in the shop waiting for collection(Don't ask) and ask them if they had a tap that would ream this puppy out and maybe clean up the bolt as well. 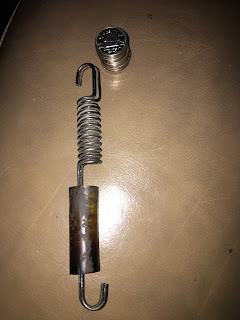 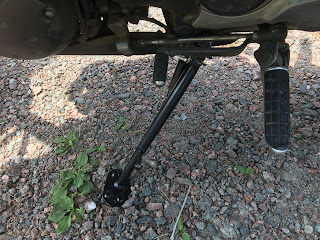