By far I prefer the Oxford Heaterz to the under grip Symtec style, as they install easily and look almost OEM in comparison, and work extremely well with variable heat settings. YMMV

External Handlebar Warmer Kit Motorcycle MT/RR
I bought a set of these from a Parts Canada retailer for my Kawasaki KLR 650, and I've a similar set sold by Dual Star on my Suzuki Bandit GSF600s. I won't own a bike without them now.

Willie and I were having a discussion about grip heaters. I run with a symtec set that have three settings: Off, Low and High.The Symtec type draw 3 amps (36 watts) on the high position, while the oxford style draw 4 amps (48 watts). 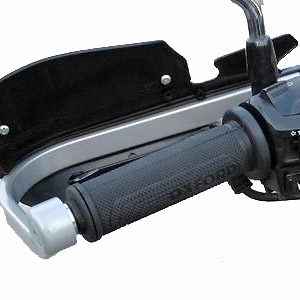 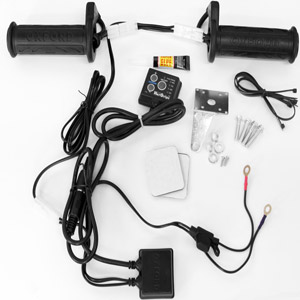 
I'm up to 9.3 amps so far not including my GPS which I estimate draws less than an amp.

Update Spring 2012: I just bought the Gears Gen 2 Vest this spring, and it seems like a great piece of kit for casual riding during the day when the temps are fine, but when the sun drops you're riding in 2 degrees Celsius or less. I sourced it on ebay and am quite happy with the performance. It is part of my long distance touring gear as it rolls up nicely and takes up less top case room.

It seems this post has been gaining in popularity, probably due to the cool spring we've been experiencing this year, so I'll tell you a few reasons why I run with grip heaters and how they perform in  bad weather like snow, rain and cold. They keep your palm and fingers warm while you have them on the grips, but will not work for the backs of your hand as efficiently. The tips of your fingers may become cold and sore regardless of how hot your palms are. Typically this happens when it's extremely cold out and most people probably aren't riding when it's just above freezing. I'm told that heated gloves work best when the weather is at or below freezing, as the heating elements heat more of your hand than just the palm and fingers.


In a perfect world I'd prefer a variable controller for the heated grips as opposed to the three position switch, so I could heat the grips just right, but they cost too much, so I'm happy enough with just the switch, and I've found that all I need to do is raise my fingers into the air and rest my wrist on the grip until the cold air cools off my palms and back on the grips they go.


Oxford make a set of "wrap over the grips" that they call "Carbon Hothands", but since you still need to hardwire a portion to the bike (they are removable), I prefer to have a set installed under the grips as opposed to over top, as the feel of the grip changes with the added circumference. I've a couple of friends who love them, one of which gave her boyfriend huge hugs for installing permanent grip heaters last fall. They're a great option for riders who want heated grips so they can get out there, but want to remove them to pose at the coffee shop on Sundays. ;) 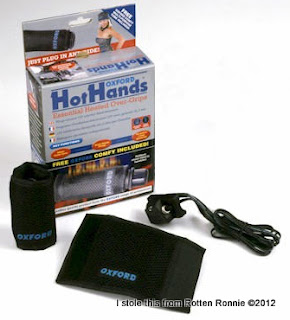 Princess Auto sells these for ATVs, and they're about an 1/8th of the cost of the Oxford style:
Ooh! I just found that Symtec also sells a heated seat element... then again, I'm not really into the whole sweaty butt scene. ;)

Finally, have fun out there, and feel free to share any tips you might have for warmer hands. Cheers!

What follows is a post I made concerning my review of the Oxford Grip Heaterz that I recently installed on my new-to-me Kawasaki KLE650 Versys:

I ended up purchasing the Oxford Heaterz Touring model, but made absolutely certain that it ran the newer V8 controller unit due to some negative comments about the older V7 model.
I was in a hurry, and ran them directly to the battery as the installation instructions recommended, then rode 2500 kilometres with them, and here is my two cents having previously run symtec and dual star heaters under my grips:

Grip removal: I slid a screwdriver up under the grip, then the tip of a some WD-40 and sprayed, after which I rotated the screwdriver around the grips and they slid off with no damage at all and got tossed into the bin of spares.
I followed up by spraying brake cleaner on the bars to remove the residue, then sanded the bars lightly to remove adhesive and provide a rough bonding surface for the (Supplied) grip glue for the new Oxford Heaterz grips.

Grip Installation: I did a dry run (and I do mean dry) to find that I needed to trim out some mould over injection material from inside the grips. One Olfa knife and three minutes and I was ready to go.
I used about 1/2 to 2/3 of the grip adhesive on the bars, then rapidly slid the grips onto the bars, the throttle side went easily, the clutch side I needed much more force, but they both went on fairly well.
I used red loctite on the stock bar ends, as I cannot stand bar ends loosening off during a ride. Less is more, one small drop per bolt.
I routed the cables down as cleanly as I could, and mounted the control unit using the supplied metal bracket onto the left mirror bracket, but not before I had to select two longer bolts from a trackpak that I keep handy to make it happen. The supplied oxford bracket had to be bent quite a bit before it could be mounted with a couple of pairs of pliers, then further bent to conform to the curved mirror bracket, the bolts themselves did this.
I ran the power cable directly to the battery along the path of the wiring harness from under the frame, zip tying it as necessary.
I love the look of the wiring loom on the Oxfords, it is so much cleaner in appearance than the symtec or dual star grips I used before, and even with the bending of the bracket and longer bolts, the assembled finished product almost looks like an OEM add on rather than something I cobbled together.
The grips are slightly smaller than OEM and Pro Grip grips, so you lose perhaps an 1/8" of real estate, and when you first ride with them, your thumbs my hit the wiring loom on the grips. Think of yourself probing a newly filled cavity with your tongue. You know its there and can't get your head around the new feeling from your thumbs, then it fades away and you forget about it.
The wiring loom brushes the top of the fairing at full lock, but doesn't grab or bind in any way, and as I rarely ride at full lock, is only a slight niggle that fades with the kilometres.
The grips themselves are not Pro Grip Gels, my favourite touring grips on the two dual sports I've run before, but are firm enough to ride trails, and soft enough to work well with your favourite gloves. They could have more give, and they slightly increase the circumference of the OEM grips, but I found that appealing, and the "Go Cruise" throttle lock and "Cramp Buster" that I used for four days of Interstate and twisties had very very little slip and needed no additional rubber traction aids to use.
The controller took me a few times to use without thinking about it, and I simply love the additional heat seatings as opposed to the old HIGH and LOW of the Symtec & Dual Star. When riding with those two products, I would lift my fingers off the grips to shed heat, or find that low wasn't enough and high was too much. In comparison, the 30%, 40%, 50% 75% 100% etc (5 heat settings) of the oxfords was very user friendly. Two buttons, + & -, tap the plus to turn on, tap again to raise, press the minus to lower and press and hold to turn off. The LED lights were visible in all light conditions, the only drawback being that as I wired them directly to the battery, I had to ensure they were switched off when stopped, even though the controller supposedly monitors battery condition and auto shuts off, I have heard tales that there is not enough juice left to start the bike, and bump starting a fuel injected bike is usually no fun although possible. I plan to wire in a relay over the winter and a battery voltage monitor as I want to run a heated jacket and GPS in addition to the grips.
For the symtec and dual star grips, I used a soldering iron, grip glue, wire, drills to pierce the fairing to install the switch etc. The Oxfords went on in 1/2 the time, and look much better. The hardest part was mounting the controller on the mirror bracket, followed by taping the wiring connections. I did use di-electric grease in all the connections, as rusting connections can really spoil your day, especially when wrapped with electrical tape, if water invades, it takes forever to dry out.
Overall, I'm in love with them and prefer them to the symtec and dual star grips I've used in the past. They look great and perform better than expected in fog, rain and cool temps.
I'd happily buy another set for the next bike at this point. Ask me 50,000 kms from now what I think. :P
Edit: I've had my grips slip using the symtec and kimpex setup, causing me to pull out my hair, remove the grips, and use contact cement, silicone, and safety wire. If you go that route, make absolutely sure you prep the bars for the adhesive and use it! Grip slip can be dangerous.

I've put about 5,000 kilometres on my Kawasaki Versys with the new Oxford Heaterz Touring model grips, and I like them very much. While the grips are not as gentle on the hands as my Pro Grip Gels, they are soft enough for day long rides. The heat is great, and riding in 4 degrees celsius with thin leather gauntlet style gloves, I never had the heat over 75% and in fact, was at 40 to 50% heat for most of the day. A couple of times I forgot to turn the grips off during rest stops, and was pleased to see that the v8 controller did what it was supposed to do, and turned the grips off automatically when the battery voltage dropped while at rest.

I did note that a friend of mine installed his grips with the wiring loom pointed UP instead of down as the grips indicate, and when I sat on his bike, found that my hands were perfectly at home on his grips, and don't seem to require grip donuts that I may put on mine.

I'd buy them again, and am very happy with them. Now to see about longevity and durability...

I was out on a ride with my girlfriend, when the Oxford left hand clutch grip spun on the bar, so it will have to come off, get sanded to remove adhesive and create a bonding spot, then grip glued back into place. Not bad for 6 year old grips that have seem over 80,000km
Posted by Rotten Ronnie on October 24, 2010
Email ThisBlogThis!Share to TwitterShare to FacebookShare to Pinterest
Labels: Elephant Ears, Grip Heaters, Grip Warmers, Heated Clothing, Heaterz, Jacket, Vest