I signed up for the annual May long weekend ride with the GTASportriders, the plan, to ride for four days, two down and two back from Toronto down to Salem Virginia and back again, but via the twistiest most fun filled squiggles on a map that we could find. 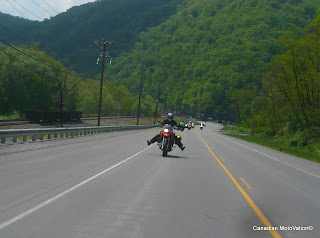 My Fork Seals are Leaking!!!

The GTASportriders.com and I have been planning our annual ride for Canada's Victoria Day weekend, and I've had some problems with the bike that had to be sorted out before riding away on a two thousand kilometer trip down south.

My fork seals started to leak on the left leg of my 2004 Kawasaki KLR 650, so I ordered in a set of aftermarket seals from Aviciouscycle.ca , the "All Balls" line that they carry. The advertisement reads that they last three to five times longer than OEM seals, so I thought I'd try them as I've gone through seals before.

If you have a slow leak, have a look down at the bottom to see if you can save yourself some trouble by using a quick fix called "Sealmate". 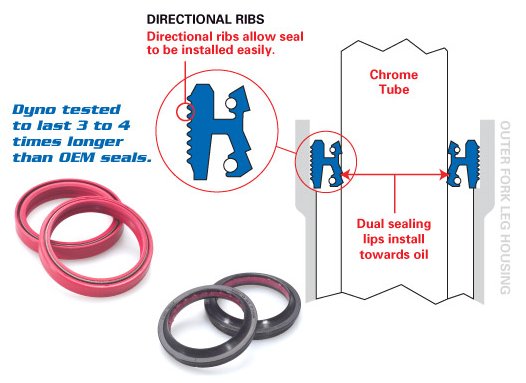 The big thing was I was going to have a stab at replacing them myself. I did some research and found a method on the internet that allows you to unseat the seals and blow them out using compressed air delivered by a bicycle pump, compressor or shop air.

To start off, I needed to remove the fork legs so I got the bike onto

it's stand and trussed it up to the roof of the garage and the sides
so that I could work without fear of it toppling over on top of me.

Once the fork legs are off, I cleaned them up so no dirt would find
it's way into the internals of the forks, and proceeded to open the
drain holes at the bottom and drain both forks. This was the messy
part. The oil dribbles out slowly, so you think to speed up the
process by compressing the fork, and instantly a three foot jet of oil
launches itself across your garage floor, straight over top of the oil
drain pan you were aiming for. Okay, there's another way to skin this
cat!!! I hooked up my air compressor to the top of the Schrader valve
and turned on the air while aiming the drain hole directly at the oil
basin. Success! A last blast of oil and I was done!.

Now I replaced the drain screw and made sure it was nice and tight,
then removed the fork seal retaining ring, and wrapped a rag around
the shiny fork tube with a zip tie to hold it in place, then slid that
down on top of the seals. I turned on the compressor again and watched
the gauge as it began to pressurize the seals, 20 pounds of air, then
50, now 80 and near 100 I heard a telltale hiss of escaping air. Sure
enough they'd risen in the well and I was able to carefully prise them
out with my snap-on hook set and a very small screwdriver.

Now I ran into a problem, I had purchased a fork seal driver for the
newer 2008 and later model of KLR, a 41mm fork seal driver, so when I
moistened the new seals with fluid and slid them over the tube, I
couldn't apply sufficient pressure to drive them home into the well so
I could replace the retaining clips!

I posted a question on a couple of the boards I frequent, measured the
diameter of the fork leg, put a new seal in my pocket and went to Home
Depot to look for a piece of PVC pipe that would fit over the inner
fork tube, but fit within the well of the outer fork leg completely
clearing it's edge by 1 millimeter at least. I found that the 1-1/2"
PVC DWV pipe was exactly what I needed so I bought a precut four foot
length and headed home to find that my question had been answered:

"invert the pvc pipe and thump the whole assembly into the ground."

so in essence, use a bigger hammer. Now we're talking!!! I placed a
chunk of old 2x4 on the ground which I'd had laying around for a dogs
age, and proceeded to have a go at thumping in the seal and dust cover
in one go.

Mission success! With one massive blow that left a ring gouged into
the soft spruce 2x4, both seals had set and I was able to easily
install the retaining ring on my test leg. I reinstalled the fork
legs, then was in for a brand new adventure, removing the springs and
refilling with oil. In anticipation of this job I'd ordered in a tool from Yamaha XS650
that would make it a precision job to both accurately measure the
fluid and to level each leg identically.

Basically it was a hollow
tube with a ring nut attached to a syringe via a plastic tube. You fill the fork leg, set the adjustable ring to the correct depth on the hollow tube, and set the tube into the fork. The ring sits on the top edge of the fork, and you easily draw out the excess fluid into the syringe and deposit it back in the container.

My next gaff was after removing the springs, was to attempt to fillthe fork leg while still at full full extension! It kept sucking back more and more of the fluid, and as I'd odered it online from New
Dundee in the Kitchener/Waterloo area, I didn't think my chances of getting another litre bottle would be good so riding was out for the foreseeable future. Darn it! :(

I took a break, had some dinner, then decided it was time to RTFM
(Read The Freaking Manual) where I found that the fork fluid was
measured at full COMPRESSION, not extension. Whew! I headed back out
to the garage and began to compress the fork leg, to find that I'd
obviously overfilled it and should have raised the leg a bit more
slowly as I lost a dribble or two over onto the tank and onto the
muffler. Doh!

Okay, that fork done and set at 188mm below the top edge which seemed
a middle of the road compromise at the time with no previous
reference. I sport tour and get into the dirt once in a while, so I
wanted a good ride over lousy pavement, but great handling mid corner
as well as being able to take a trail without bottoming, and this
seemed like a middle of the road safe guess.

One of the fork caps was a bit cross threaded so I had to clean up the
soft aluminium thread with a needle file before it went home and
sealed properly.

Now to put the wheel back on and clean up this unholy mess! I'll do my
own seals again, and maybe even go for complete fork disassembly, but
I'd prefer to pay someone else to do it and work some overtime to pay
for it. ;)

Did I mention it's a messy job?

22,000 kilometres and the Trans Labrador Highway later, and they're doing fine, thank you very much. ;)

Are your forks dirty and now leaking slightly? Perhaps you can salvage your seals by cleaning out grit and dirt that might be letting oil slip through. It's a ten dollar fix that might be worth a try, or you could cobble something together with a stiff piece of plastic from an old set of window blinds or something...

Check out their product here: http://www.sealmate.net/

And read a story about my 2009 Kawasaki Versys 650 that needed some TLC on a leaking fork seal... Seal Mate was the answer for that one.  https://www.ridereports.ca/2016/05/leaking-fork-seals-solved.html