Caroline enjoys camping and riding her motorcycle and we've been having fun since 2019 camping and riding together. Last year we stayed at a lovely little campground on the Sunrise Trail in Nova Scotia that sits on a body of water called Linwood Harbour adjacent to McCall's cove near Havre Boucher NS.  We enjoyed the experience so much that she thought to invite her son and his friend to join us for a camping only weekend. We'd ride, they would arrive in the cage, but we would stay at Hyclass Campground just for the camping experience. It was fun, and we thought it worth repeating this year as well.

This year Caroline picked the 11th and 12th of September to reserve the campground, but as she needed to sign up for a welding course she will be taking this fall, she had to be in Summerside while the boys headed to Truro to dine at Taco Bell, a simple matter of driving 2 hr 40 min (234 km) to Truro NS for this, then why not add in a stop in New Glasgow because it's on the way?!

Meanwhile, back on the Island, Caroline had succeeded in signing up for her welding classes, and I'd managed to shift my lazy butt on down the road to "Not Anna's", our new name for an old local restaurant in Crapaud run by my friends Anna & Sandy, but they had retired and sold the restaurant to Bakers Dozen Donuts. It's been give a coat of paint and they've made some changes inside, but sadly the food isn't quite as good what Anna would have served. The bacon was wafer thin, you could almost read a newspaper through it. Oh well. When I finished up I headed up the road to get some gas and saw that Caroline had just pulled into Ceretti's and was on her phone to someone... Then my Scala started ringing to announce an incoming call, I wonder who would be calling me on a Saturday?!
We topped off our fuel tanks, then headed over to the Confederation Bridge toll plaza to find that we might be following a large camper and truck over the bridge, but lucky for us they got confused and tried the truck lane only to change their minds at the last minute and opt for the auto booths, by which time Caroline and I had scooted up to the agent. "I'll pay for both, She will go first." to save her from having to tell us that she was only allowed to open the gate for one at a time. We may have done this a time or two... :)

It was cooler today than much of the summer, and I had done up all my vents in my leather jacket back at the gas station, but the breeze was ever so chill on my knees, and I sort of relished the colder air, as we'd had quite a hot summer this year, when it wasn't raining. Murray Corner awaits!


This little route of ours is so much nicer than queuing up behind a tractor trailer or an RV heading west on 16, one right after another, with cars packed in so you aren't able to safely pass, and have to follow like sheep. Baaaaaah!!! Sure this route adds a few more miles, but they are quality sMiles.

We followed the Sunrise Trail until I whinged to  Caroline that I would appreciate a lunch stop at some point before we hit the campground itself. She is adept at skipping meals while riding, so it's my job to suggest that we stop before late afternoon turns into an early supper. lol. That worked out well as she wanted to stop in Wallace at McMahon's restaurant to see why their parking lot was so large. The East Coaster burger was appealing, as was their large selection of diet soda. I was pleasantly surprised that I could enjoy a diet ginger ale as opposed to the usual diet cola, and Caroline wanted to add a side of potato salad to the order as well. Fine by me. We placed our order at the take out window, and retired to a picnic bench to chat up some fellow riders that were out enjoying the weather and roads. 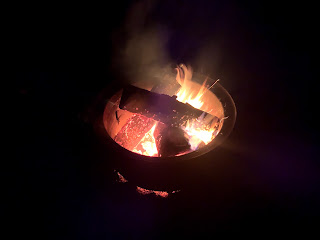 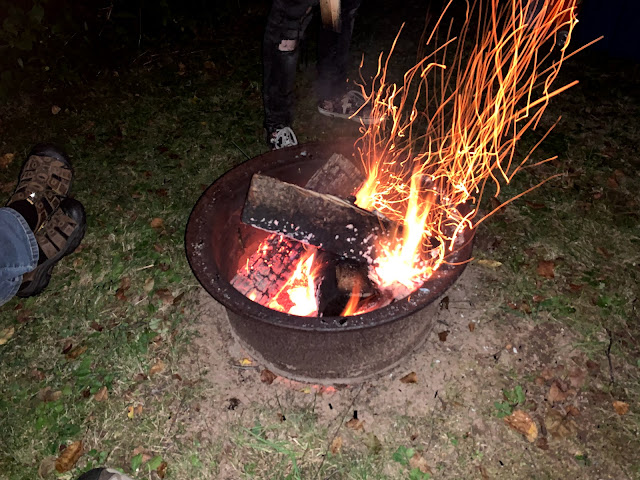 The boys were reluctant to cover the tent with the rain fly, and Caroline was keen to swing from the trees in her hammock tonight, and I was completely out of cider now, so there was nothing left for it but to head over to the washroom, then roll into my sleeping bag for the night. Caroline figures we were in bed at 2115 and I was snoring fifteen minutes later. Hahaha. She ended up spending the entire night in her hammock and was quite pleased with the result, and bemoaned the fact that many of the prepared sights we went to had no good hammock trees available. But they have washrooms and showers... ;)

Linwood NS to Charlottetown NS -  Drive 276 km, 4 hours, 54 minutes
Caroline plotted out an insanely fun route that yes, took us off the beaten path in favour of beating a path of our own south through Guysborough and into the interior, and onto secondary and tertiary roads to get us roughly back to Caribou Ferry in time for the crossing. I had so much fun on this trip that I bought her a new Quadlock cell phone mount (highly recommended by our friend Mikayla B.) for her motorcycle for Christmas this year to encourage more behaviour like this. Lol. Full tank of gas, time to kill, lets go explore!

This is what I woke up to in the morning, Caroline peeping out from her hammock wishing me a good morning in return. I'm still amazed that there were no bugs nor any rain last night. Lol. I'm not brave enough to sleep under the stars. I'm sure I'd be eaten alive or wet come the dawn.

Daniel and Shamus love the No Frills Smoked Bacon Hashbrowns, and our whole morning was going to be a leisurely breakfast featuring them, along with cheese, and some extra bacon.

We had this last year for our breakfast and they must have developed a liking for it, for it featured highly on our menu for this year. I admit, I enjoyed it as well. :)

I'm kidding, it was more like three hours... :P While the boys made breakfast, I retired to my picnic table to get a brew up going, tea for me and hot water for Carolines AeroPress coffee maker.

I've used this setup for a few years now, pretty much the season after Caroline joined me and became part of my misadventures. Last night when we where cooking up the hamburgers, the wind was a bit brisk and I used the windscreen to shield the stove. Well it got so hot in there and under the fry pan, that it crisped the piezo igniter, and it is sadly no more. I'll have to bring along a lighter for this stove now. It gets bumped back to backup stove and it's replacement will get used for camping in 2022.

Well, once we'd cleaned up from breakfast (brunch) the boys were off to Truro and Taco Bell for the trip home, and Caroline had this awesome route plotted that I was eager to try as well. The boys packed up there gear and set off for Truro again, and Caroline and I were ready to go, but it seemed to take a bit longer this morning to get our butts into gear.  We were out the gate but stayed to chat with Dave and his wife for a bit before finally throwing a leg over and heading over to NS 16 South and into Guysborough NS.

From Guysborough all the way through to Greenwood NS 316 is a bit of winding lazy magic. I'm hoping we can add this in to more of our riding plans for this area. Have you ever retraced your route going the opposite way? It's a whole new road with new challenges. :)

All too soon we found ourselves back in civilization and hit the highway on the other side of New Glasgow where you get funneled onto the NS 106 if you are heading to the Ferry. We skipped out of the queue and filled our tanks and stopped for coffee at the Pictou Tim Hortons, then headed the long way through the center of the town on West River Road, that changes to Denoon Street, which changes to Beeches Road, and later on Three Brooks Road before it joins up with the Ferry terminal again. lol. It struck me as the same road the whole time.
We were quick with the banter and repartee... "Two Prince Edward Island residents returning from a short trip, both vaccinated, lane 3?" (This time I had the right answer!!!) and off we went to wait our turn to board the ferry.


We got our pink slip to avoid the lineup at the Wood Islands PEI COVID screening center, that announced to the world and to whom it may concern that we had met all the requirements to skip isolation and did not need to be diverted to the screening center queues and lineups. HOORAY!!! Now to wait to arrive.

And after an hour or so, we were back to our island, and homeward bound. Yes, they let us board first, and exit first on the ferry. I think Caroline and I were the first to arrive in Charlottetown of that whole passenger list. ;)
Catch ya next time!
Posted by Rotten Ronnie on September 12, 2021 No comments:
Email ThisBlogThis!Share to TwitterShare to FacebookShare to Pinterest
Labels: 2006 Kawasaki KLR650, 2009 Kawasaki Versys KLE 650, Moto Camping, Nova Scotia, Touring