I'd arranged with Trevor to be in Burlington at Guelph Line and the QEW where he was meeting John to pickup the 2002 KLR that he'd just purchased, although I was there to get a used Corbin "No-dip" saddle for my KLR.

I'd bought it online off of Trevor ages ago, but as he was in Tillsonburg Ontario, I just never found the time to collect it, and when John and Sarah found out that I was riding out to collect it, they invited themselves along for the ride, although they were late getting up and met me in Campbellville at the Icehouse restaurant.

Let me tell you, if you were forced to live on one side of the city or the other, Halton is a great, hilly place to be with twisty roads, gravel and some great food.

We left the Icehouse and headed south to Appleby line and climbed the escarpment, then back down the south side of it. Sarah was a bit concerned about that inside lane tight hairpin down the south side, but enjoyed the experience. I hope I can convince them to do some riding in Pennsylvania with me this summer or fall, where there is plenty more of that.

So the concept now was to head north through Lowville and end up at the Cheltenham Badlands just south of Belfountain on Olde Baseline Road East off of Mississauga Road. I used Google Maps to create a fun route, then GPSVisualizer to load it as a track onto my Garmin 60Cx GPS, so all I did was follow the blue line. It's so much easier than allowing that foolish auto-routing tool to take you off on Adventures By Garmin™. 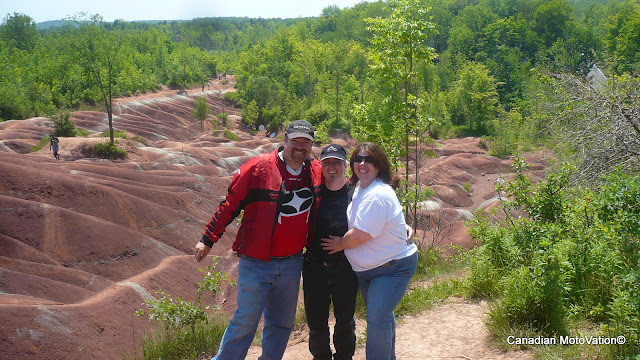 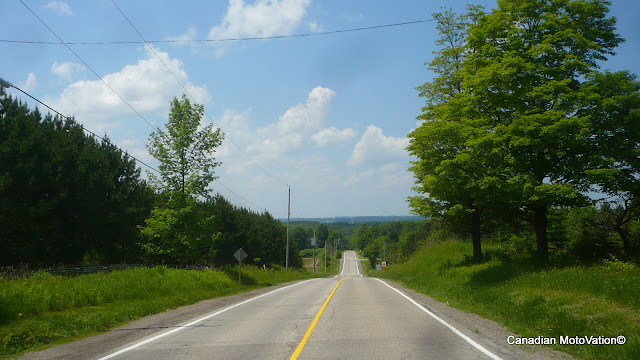 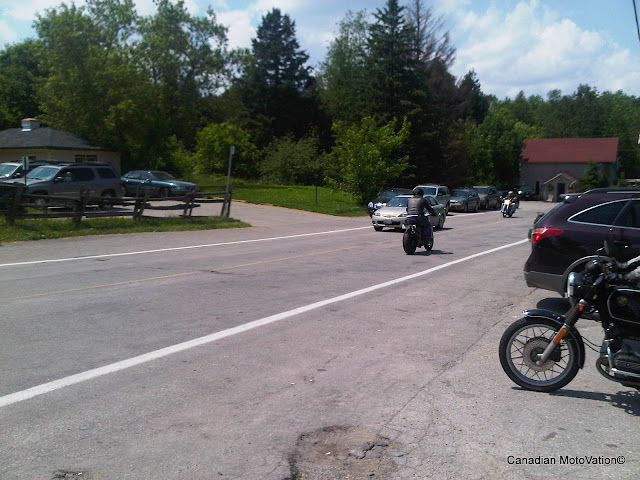 John and Sarah were heading North through Hockely Valley and home, but my destination lay further south in Richmond Hill, so I turned off on Escarpment Road, a fun hilly gravel sideroad that goes on for a fair distance south of Highway 9, and I caught up and passed a Yamaha FJR riding two up on the gravel. He was pretty capable on that bike and maintained a good speed.

So I was practicing a different cornering technique today, to tip the bike in but stay high in the saddle upright while throttle steering around the corner. It feels weird, but I'd slightly better control with it. I'll play around some more and see what happens. As always, I was saying "Get your head up!" to prevent myself from looking at the ground as I tend to do when off road or in some rough and hairy gravel situations. If I get my eyes up and look through the hazard, over it. I tend to ride right through it in the path I want as opposed to the path the bike wants to go because I hit three potholes and never saw them because my eyes were looking at the one twenty metres back. I try to challenge myself each time I'm out. Sometimes it can be a challenge just starting the bike. ;) 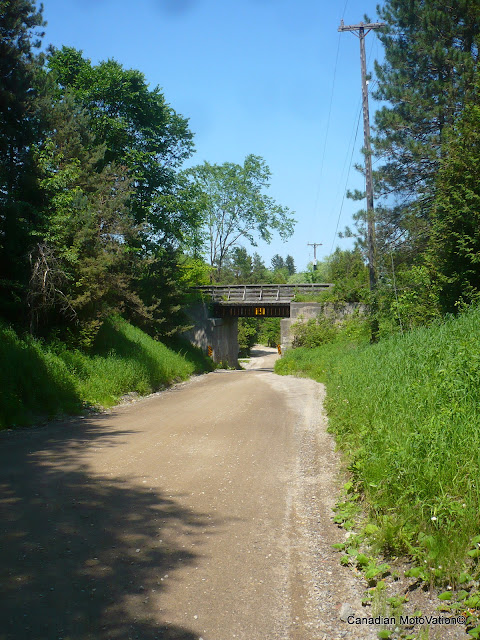 I'll see you out there again, have fun and keep the rubber side down.
Posted by Rotten Ronnie on June 18, 2011 1 comment:
Email ThisBlogThis!Share to TwitterShare to FacebookShare to Pinterest
Labels: appleby line, campbellville, cheltenham badlands, Forks of the Credit, ice house, restaurant

The Wrong Place at the Wrong Time

I lost a friend and colleague this past Sunday in a tragic accident that claimed her life.

From my tribute to Liz locted on GTAMotorcycle.com:


I'm going to miss you, Liz, I will remember you as that geeky, goofy girl with infectious laughter, a ready smile, pithy comments, and with the strength of ten for your heart was pure.

As an instructor with Learning Curves she brought years of practical experience to her students, and she did her best to coach students past their faults towards better riding habits. I loved working with her, as she brought positive energy, that smile, and her "Let's get this done and call it fun!" attitude every time she was on the lot. She excelled at coaching, and her loss is felt most acutely by my colleagues and her friends.

Those "media hound" tweets of hers were all over the map, as she had varied interests and tastes. I'll miss those quite a bit.

She was directly responsible for suggesting a means for enabling Suzi to ride in comfort with me on our tours aboard the KLR. Thanks Liz, Suzi and I will never forget.

When my number is up I would feel fortunate to be remembered so fondly by half as many friends. You made your mark

She was the author of more than one blog, Moto-Mojo and Lizard Words. One of my favourite bits of poetry is:A Minute in the Life of Gerry the Grasshopperhttp://lizardwords.blogspot.com

Liz, So long and thanks for all the fish. Your friends, Ron and Suzi.

She was the author of a number of blogs such as  Moto-MoJo  Lizard Words  Media Gleaner and describes herself on her Blogger profile:

Liz is a Toronto writer and editor with extensive experience in Web product management. Part of the teams that launched Canada.com, Yahoo.ca and AOL.ca, she has created content and content promotion strategies for almost every major portal in Canada. Known for creative problem-solving combined with solid technical skills, she has been building online audiences for almost two decades. Less well-known is her obsession with poetry and motorcycles. A motorcycle instructor for Learning Curves and a dirt girl wanna-be, over the years her rides have included a Honda CB350 and 450, a Honda Shadow 500, a BMW R75 and a Honda CRF230. She currently owns a Yamaha YZ250F and a Kawasaski ZX7-R that’s had so much plastic surgery it’s been dubbed “Hollywood Baby.”

Goldie and Don did a great job speaking on behalf of the motorcycling community that is reeling in shock at the loss of one "good" ones.

What can I say about the accident speaking as an enthusiast and motorcycle safety course instructor? We can gain experience, achieve skilled control of a machine in good working order, yet still be become involved in a collision due to circumstances beyond our control. At this point we have a decision to continue riding in spite of the inherent risks or to put the bike up for sale. Should the choice be to continue riding, we can limit our risk by ensuring that we remain visible, that we leave a large space cushion, and operate with care and pride.

At the end of the day, let those around you know that you care about them, and program an In Case of Emergency (ICE) contacts into your cell phone so that next of kin can be notified promptly.

If you really want to make a difference, I encourage you to take an Emergency or Standard First Aid course with CPR. Check with your local St. John's Ambulance.

Be careful out there, I can't afford to lose a single friend. ;)