The Versys gets new shoes

In the spring I replaced the Conti Motion tires that had come from the previous owner with a set of Continental Trail Attack2 tires, thinking that with the more aggressive tread pattern that I would have more traction on gravel, and as they don't make a 160 width rear I opted to go to 170 on the back. It was a good choice, and I got 15,000km out of them before they started to square off. The front scalloped and squared off, and later at 18,000 instead of tipping into a corner, it dumped into it.
Still, I had enough faith to reorder them from Pete's Superbike in early September, only to find that the rear tire wasn't in stock and wouldn't be until late October, so I cancelled the order and instead went with Michelin Pilot Road 4 tires that just got spooned on today at 39,250km on my odometer.
So far, in a 40 km dry run they've been great, although the handling of the bike will take some getting used to again, for the 160 rear likes to turn in quicker than the 170, so I find myself cornering without needing to lean off the bike whatsoever.
I'll report back later to tell you what I think of them in the wet and over the long haul.
The Continental tires are brilliant in both wet and dry, so much so that I inadvertently power wheelied in the wet with them a couple of times. They are confidence inspiring tires to be sure, until they square off...
2014-10-08
I rode home in a downpour and the Michelin Pilot Road 4s handled it with aplomb. Under acceleration it felt like I was on dry pavement, and while trail braking into a tight right hander, I got a bit of feedback from the front, as I was braking a bit harder than I should have. No discernible slips, just decent traction that I was expecting from these tires. Cold tires, heavy rainfall, and a confident rider.
They don't handle Prince Edward Island s wet clay roads as well as I'd like, but I've ridden some heavy mud offroad on dirt bikes, and the Versys managed alright, although I aimed for the dry spots by default. The front slid twice, but the rear had enough traction under throttle to poke on through.

2016-04-02
I just had Pilot Road 4 rear tire taken off the bike, and swapped it out for a fresh Continental Trail Attack2 Rear Tire at 49,400km on the odometer. Sadly the PR4 lasted only 10,000 km so I can't recommend these as sport touring tires. YMMV but it should be noted that you and I probably have different riding styles that may account for variation. 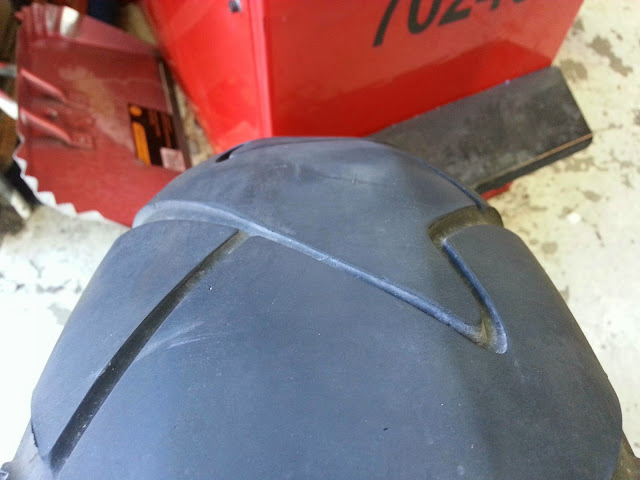 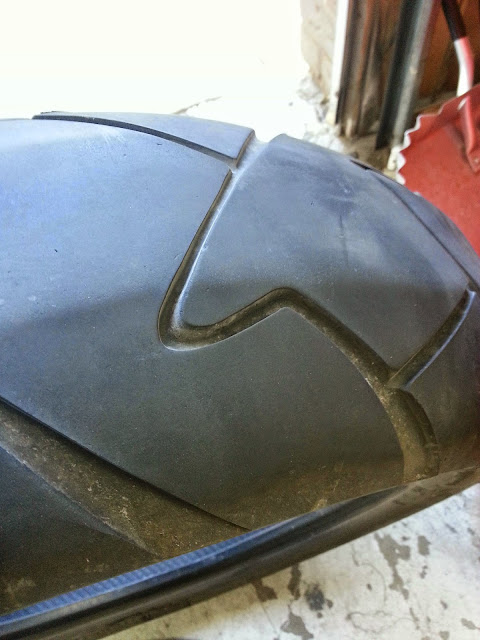 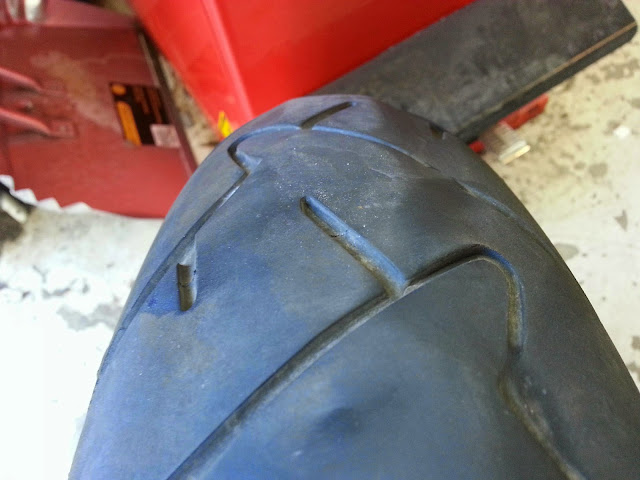 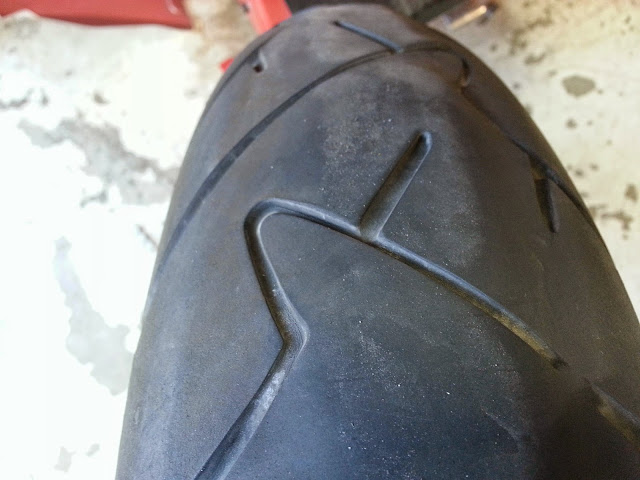 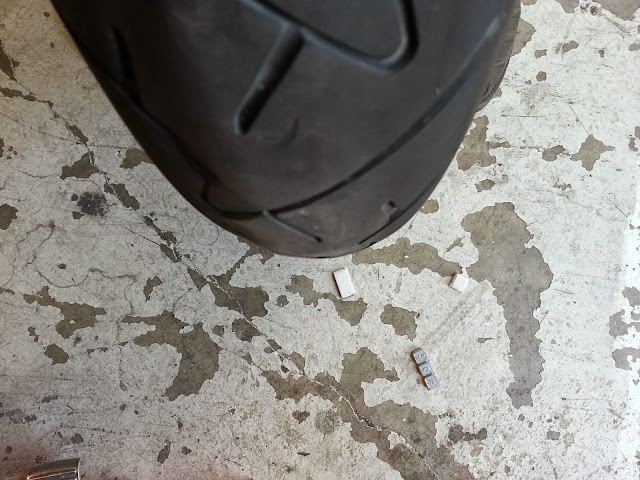 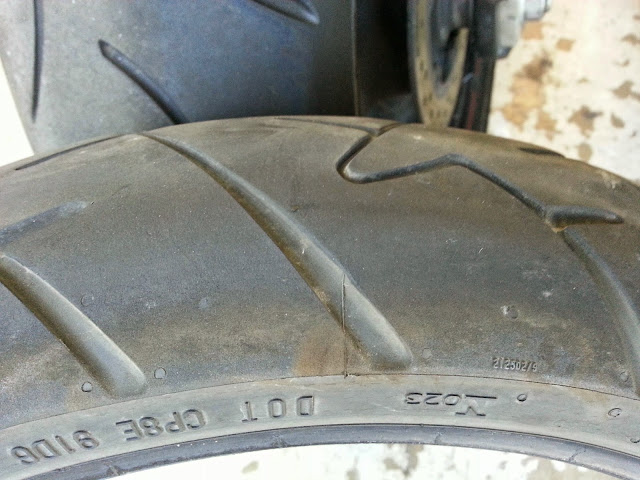 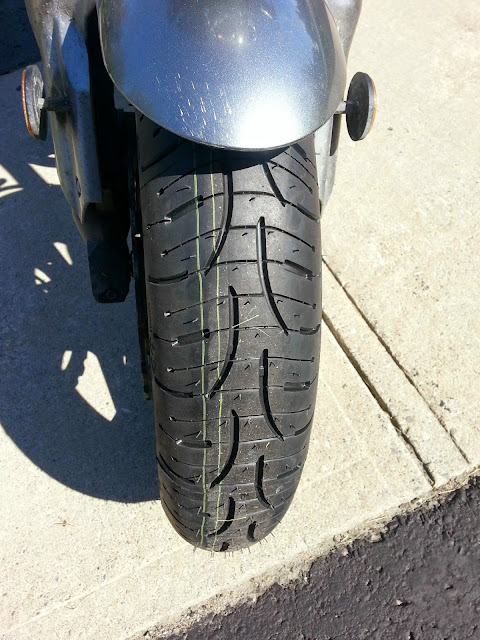 I only got 10,000 km on this rear tire, so I've gone back to Contis for this 2016 season.
Posted by Rotten Ronnie on September 25, 2014 No comments:
Email ThisBlogThis!Share to TwitterShare to FacebookShare to Pinterest
Labels: 2009 Kawasaki Versys KLE 650, Continental Trail Attack2, Michelin Pilot Road 4, Sport Touring, Tires

The Versys gets turned into a bagger!

I got tired of hauling my gear like this:
They didn't work quite as well as I'd have liked on the KLR so I set them aside and mounted a Packrat rack and some ammo cans for my Labrador Newfoundland run... 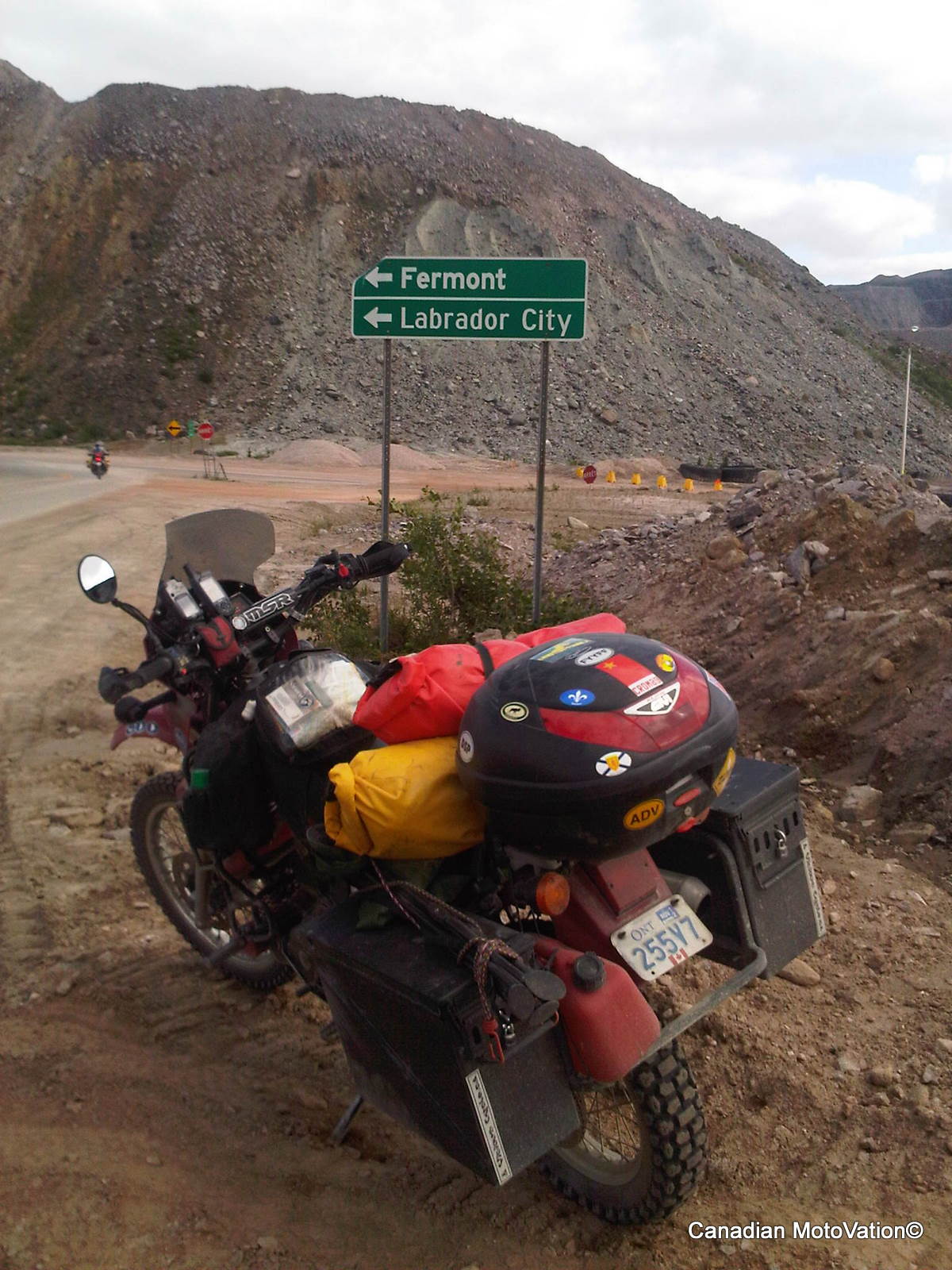 And the Givi cases got set aside when I bought the 2009  Suzuki DR650E as I wanted to go with rough duty racks and pelican cases for the odd 'Oops, I dropped my bike' incidents that I'm prone to while riding off road. BRAPPPPPP! Oops!

The Versys on the other hand, while labelled as an adventure bike, really shouldn't go on any roads that you would hesitate to drive your average Honda civic down. Largely due to suspension, weight, 120/17 front etc.

So those cases that I spent over $700 dollars on have been sitting idle for a few years, and I really missed them this last trip out to Prince Edward Island, and to the racetrack for the weekend. I made do with soft luggage, but you always worry about your fairings getting ruined by vibration and the friction of the straps riding on your fairings, not to mention the canoe bags conveniently right over top the zippers, and you need rain covers, and a third eye to prevent people from pilfering them while parked.

The Givi E41s are waterproof, lockable and will store two full face helmets per side, and I can always acquire a couple of smaller e21s later on to prevent me from stuffing cement blocks or anchors into my side cases. Extra weight in the bags act like out riggers and work fine on straight ahead riding, but require extra effort to counter steer into a left turn, then counter steer and transition into a right hand turn. So the rule of thumb is keep the weight as light as possible and as low as possible. That being said, I dragged a bag on VT 17 one year on my way back from Cromag '08, an ADVRider rally, and when that bag touched down and I realized that I wasn't going to be able to tighten my line in the corner, I got my @ss over the side of the seat and pretended I was Kenny Roberts and cranked that puppy up and off that road for a wee bit more turn in. Well, they never said it was going to be a perfect setup. ;)

Anyhow, I pulled the pin and ordered the racks in for the Versys from Aviciouscycle on Wednesday at 3pm, and came home today to find them sitting on the porch this afternoon!

A couple of choice words and a gallon of loctite later... 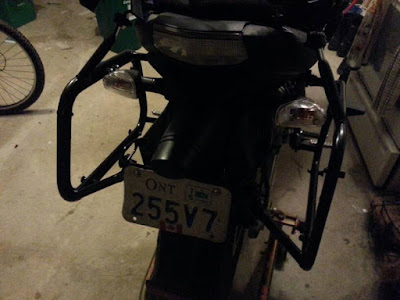 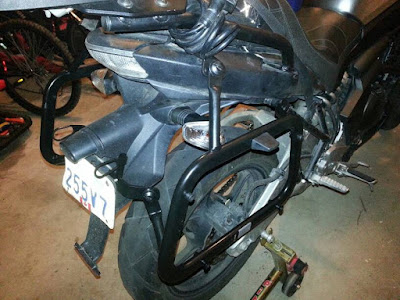 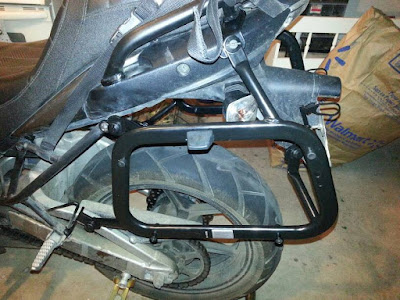 You will no doubt notice that I chose not to relocate the turn signals. I really don't care to chop up oem wiring, and think that the bags won't be on the bike long during the season, so I'm not too worried about it.

I now have to colour match the coloured panels or perhaps rattle can them black to match the rest of the case, then I can stick them on anything.

If you can't tell, I'm a pretty happy camper. 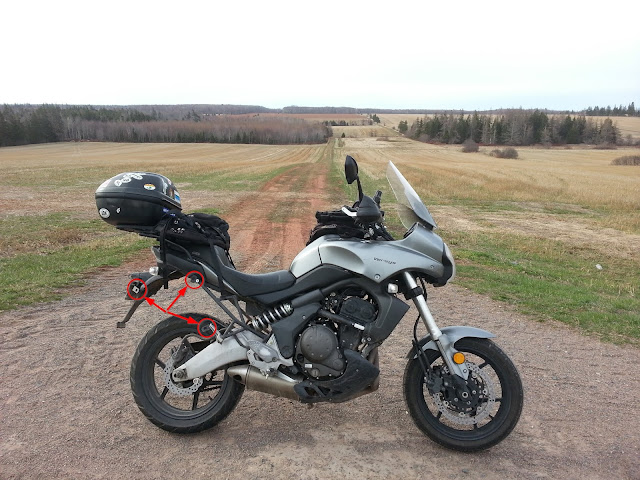 That leaves you with three mounting points for the remainder of the year when you aren't touring with your Versys. ;)
Posted by Rotten Ronnie on September 08, 2014 No comments:
Email ThisBlogThis!Share to TwitterShare to FacebookShare to Pinterest
Labels: 2009 Kawasaki Versys KLE 650, Givi, Luggage Racks, SW Motech

Don't you know that whenever I dismantle parts on a bike, they tend to part company with me? Take my right front fairing for example...

Yep, that shows a broken mount from the top rear fastener. *sigh*  I'm going to have to learn how to plastic weld if this keeps up, and I expect it will.

So in order to access the air filter that is so conveniently located underneath the gas tank, you have to first take off the windshield, then the two left and right front fairings, the left and right body strips, unscrew the tank itself, disconnect the fuel line, fuel gauge, a breather hose, loosen two over flow hoses, and a Phillips screw before you can pull out the plastic and stainless steel mesh frame that houses the foam element air filter.


The easy part is cleaning and oiling it. Zip loc bags come in handy at this point, and as I had no mineral spirits I used Coleman camp stove fuel. It reminds me of Badger NFLD where I cleaned the filter for my KLR in my friends Aunts driveway using the contents of my stove.

The operator's manual calls for regular motor oil to be used on the filter... DON'T DO IT!!! Read the notes at the bottom of this page first!

Okay, let me get back to putting this puppy back together...
Cheers!
Can you believe three hours to clean and oil an air filter?! It's back together and I took the opportunity to rubber mount the fairings using some sheet rubber and a leather belt punch. Each fastener now has 1/8" rubber stand off from the bird cage. If I'm lucky that will end the 4500 rpm fairing buzz.
Now that high idle at startup should be gone, and I'll get better gas mileage. Right? Maybe. Tune in again to see what damage I can do.

Update: I was riding it home after a hot day, and met up with my friend Jay on the 401 highway, who at a stop light in Ajax, pointed out an oil leak on my cylinder head. Doh!
Thoughts of how much I could afford to put into a $1000+ repair began to make me feel sick, especially with a tour coming up this October to the Catskill mountains.
I checked it at dusk, trying to determine the source of the leak in the confined space between the air box and the cylinder head and was unable to see the culprit in that low light.
A further inspection found that the air box over flow pipe is located directly on top of the head, and excess oil from the foam filter had trickled it's way out onto the head. Bugger! That scared me, but what a relief to find it was not a disaster after all. In future I'll use a dedicated air filter oil such as Bel Ray Foam Filter Oil (Blue, thick and very tacky) I purchased a bottle in 2007 for my Kawasaki KLR 650 and still have it in the garage. One litre lasts forever, and you can use it for snowblowers and lawn mower filters too.

Now I can focus on replacing that squared off and scalloped Conti Trail Attack2 front tire!