The EnduroStar Trail Stand and why I love it

My very first stand was a piece of 2 by 4 with the letters "K.L.R" spray painted on the side for use in the shop for propping up the swing arm so I could lubricate the chain and sprockets. I marked it as it was the perfect height for slipping under the swingarm, and I didn't care to throw it onto the fire pit in a drunken stupor while regaling friends how to perform the perfect wheelie, or how to pick up your bike properly, and other good stories, fact or fiction. It was a very fine piece of pine almost entirely knot free.

What with the internet and all, I found out that many people made their own trail stands and packed them along with them for assorted reasons, and as I had one or two roadside punctures, I decided that I could make my own out of a hospital crutch that I'd acquired when my Bandit hit Bambi way back in 2007.  It worked! But then I found myself drawn into a discussion on advrider.com with fellow inmates and up popped this dude who put in a shameless plug for his new trail stand. I figured that "Made in the USA" meant that I'd never be able to afford it or justify the expense plus shipping to north of the 54th parallel, so I ooh-ed and aah-ed, then promptly forgot about it.


When I had a flat on the first 60 kilometres of a 1600km journey to Prince Edward Island on my fully loaded KLR with my dog Suzi on board, it took a call to a friend and his garage set up to fix the tire and get us back on the road, so a huge shout out to Willie who went out of his way to get us back on the road and to my friend Dan who kindly let me rob him of a rear tire hanging on his garage wall.

That stand you see in the shot had to be brought out to me by my friend Willie in the trunk of his car, and if I tried to squeeze it underneath the seat or into a tool tube, I'd still be out on the shoulder today. The sad part is that I already had most of the tools I needed to fix the puncture and get back on the road underneath the seat and in the tool kit. Complete with levers zip tied to the sub frame, and a bicycle pump under the seat.

If I pissed off Willie or Dan or they didn't figure that hitting the Trans Canada was worth their while to help a mate in Atlantic Canada as opposed to Ontario, I might be forced to renew my CAA membership!


Right, fast forward a couple of years, and there is my friend Eric manning his booth at the motorcycle show in Toronto with one of those fancy Enduro Star trail stands right there in the display case, and he lets it go for under $30 dollars. STFU and take my money, Eric! Now I'm totally chuffed and eager to get the elastic bands off of this thing and see how it works.

The design of the Enduro Star Trail Stand is simple, straight forward and ships fully assembled, although the Velcro strap puzzled me at first (more on that later), constructed completely of steel, and with five parts plus the strap to make a total of six bits. You only need to take off two gloves to count this high!  When testing it for first time use, I found that you need to remove the retaining pin, extend the rod to the desired height, and insert the "V" crotch into the top, then lever it up underneath the motorcycle to support the weight, at which point you may find out what that Velcro strap is for as your bike may or may not want to roll forward off and away from the stand. If you are anything like me, then you will need to RTFM to figure out that the Velcro strap prevents that roll by firmly pulling your front brake lever in against your throttle tube. (I find I don't need the strap when just lubing the chain. YMMV)

With a heavy bike fully (over)loaded for touring, I found that the foot needs to be on asphalt or similarly supported if on dirt with a kickstand plate, rock etc. With lighter bikes such as my KLR, the DR650E or my Honda XR400R, I was able to use it on firm grass or dirt surfaces just with the included foot.

It's so well constructed that it survived an 8,000 kilometre trip across the Trans Labrador Highway and the only damage was that which it caused to the plastic top case by rattling around in the bottom of it! I initially disassembled it and had to stored away in the tool tube, but found I was using it so frequently that I got lazy and tossed in back with the chain wax. lol.


What you don't get:


I think I learned my lesson well enough with the KLR, and used only heavy duty tubes from that day forward, and over a few different bikes I've been very fortunate not to need to use this on the stand or roadside for flat repairs, but in the garage or out in the motel parking lot for simple chain maintenance, this thing is stellar! I'd throw the bike into neutral, lever up the arse end and slip it under the swingarm or footpeg bracket, and get down to the serious business of lubing the chain. It's not going to replace your garage stand, but for quick little jobs like this, it has paid for itself in terms of ease of use, availability, durability, and providing me with incentive to spray that chain at the next gas stop.

I contacted the sales@endurostar.com for permission to use some photos on the blog, and he noted that I've an older TS2 model, as the "V" crotch slips in and out of the end of the stand, whereas the new and improved TS3 incorporates a threaded design so you spin the "V" crotch into the end of the stand securing it. So you might want to think of the safety wire holding the end of my stand together as the TS2beta. It works for me. :D

I've posted a few close ups of the trail stand in action from my tour of Nova Scotia's Lighthouse Route that I travelled this summer, and the same stand has been with me for seven years and over 150,000 kilometres of touring, from the Trans Labrador Highway down to the Blue Ridge Parkway and Deals Gap. 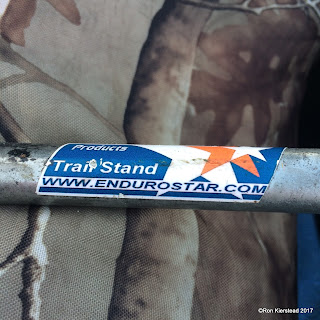 I got mine from a Canadian vendor that has since sold his business, and sadly I was unable to find inventory of the three Canadian online retailers that I checked, but it is sold directly on the Enduro Star website or if you are still not convinced you can read the reviews here on AdvRider.com

While it makes a superb trail stand, it doesn't work quite as well as a bat. Hey Steve! How about a optional hammer head to pound in tent stakes?! 3/8 drive ratchet adapter? Bottle opener! Back scratch-er! Toe nail clippers and wire cutters! This could be huge!

Disclaimer:
I didn't get paid to write this, but if you want to reimburse me for my time, or help fund my new wheel bearings, then you know where you can find me...
Look for the loose nut behind the bars!
Posted by Rotten Ronnie on August 23, 2017
Email ThisBlogThis!Share to TwitterShare to FacebookShare to Pinterest
Labels: Chain, endurostar, jack, Maintenance, trail stand, TS2, TS3