I'm a bit disappointed that my latest Continental Trail Attack2 set of tires hasn't lasted as long as previous sets. In fact I only got an estimated 10,000km off of this rear tire, and I had been expecting 15,000 to 17,000. Maybe they're using a different formulation?

Anyhow, I was reading JDRock's thread on advrider.ca and heard mention that the Shinko 705s were getting 6000 miles off of a rear tire, so I took a look at the price difference between the Contis and the Shinkos, and you can see the result.

The post truck rolled up the driveway with my new Shinko 705s and I'm off to get them installed in Summerside just as soon as I get finished this. Lol. 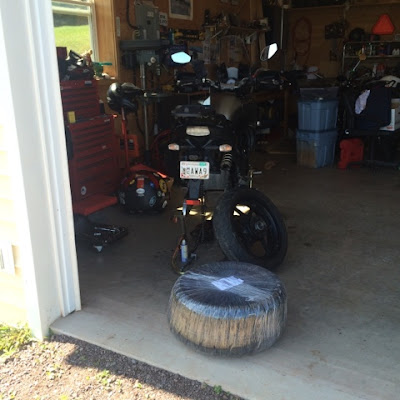 I'm also in the middle of installing new chain and sprockets, a 16 tooth front that is supposed to correct the speedometer and give me slightly better fuel economy, but mostly because I keep trying to find an extra gear when on the highway. If I can still power wheelie in first, I'll be a happy camper! JT sprockets and chain from fortnine.ca

I'm off to get the tires installed and balanced!

I got back, got the tires mounted, whipped off the old front and rear sprockets and cut down a 118 link chain to match the 114 that I'd just taken off, and found that with the adjusters ALL the way in I could just get the master link in and riveted. In future I'd leave it at 116 then you can play with both sprocket sizes if you had the desire to do so. Speaking of which, you probably want to see some part numbers to know what I was playing with. They are all JT steel products, most of which I purchased through FortNine.ca with free shipping.

I'm not happy with the JT chain and sprockets and won't have them on the Versys in the future.
I'm going to start using a paint brush and some SAE 90W or some chainsaw bar oil instead of Maxima Chain Wax as I find that coupled with the dust and dirt of gravel roads, it becomes a pasty grinding compound and I'm convinced that it shortens the life of my chains. Most of it is getting flung off onto my front sprocket cover. lol.

How does the bike ride with the new tires? On gravel there is giggle factor. Wide open throttle and I rocket forward with little slip. Power wheelies on gravel are possible and pretty epic on the hard packed dirt, and a bit squirrely on the loose stuff. Rear braking is a lot more aggressive than it was with the Contis, as those tires you kind of felt like the Energizer bunny trying to slow down, but when you chop that rear brake with brand new 705s, you definitely slow down faster, and need to alternate between full lock and threshold as the rear will want to skate a bit. I felt much more confident running up to my usual 100 kph on the dirt road near my place, and I was able to stay on throttle closer to the stop rather than coast in gingerly as I did on the Contis.

There is more noise noticeable at low speeds on pavement. As soon as you hit third gear and roll on, it fades into the engine and wind noise. It was a short trip/rip so I can't comment about vibration yet.

Turn in at slow speeds is fast, in fact after scrubbing the shoulders off on my Contis in Nova Scotia, it seemed a bit twitchy, but that was a first impression, and I found the front quite well sorted, and with the wider rear, the bike tips into the corners with a tad more effort. Remember these are new and I haven't scrubbed them in, so I'll have more once I've done some wet weather and long distance on them.

Have you been on the highway and tried to hit 7th gear? After this mod you won't need to. The 16 tooth (+1) /46 tooth (Stock) combo is a recommended mod by those on the Versys forum in the know, and I've been wanting but hesitating for a while now, and had it sitting in my tool box for a couple of years now, and today was the day! I can still power wheelie in first, and skip through third gear after winding up in second, but on the 80km/h posted back roads, I found I was cruising them in 5th as opposed to 6th gear! Once I hit top, I was cruising at 4500 rpm just ticking along at 97kph. Once I hit 5000 rpm, I was at an indicated 110kph with more then 2/3 throttle to go. I can easily see why the guys on the forum recommend this for touring. It just feels right, and should settle the bike down for those long boring runs on the highway, yet still leave it with enough snort to climb hills with aplomb. If I don't like it, six bolts and I'm back to a 15 tooth stock front.

I now think that if the majority of your riding is done in a relatively flat area with minor elevation changes and most of that is on paved road, then you will love this mod.Read on:

If you ride a lot of gravel roads, forestry, logging, access roads or live where the roads climb up and down hills, then I would stick with the 15 tooth sprocket so that each gear has more power. In the gravel I was finding myself in spots where I wanted extra oomph to get the front to lighten up in deep gravel or across potholes and it just wasn't on tap at the throttle because of the gearing.
Climbing hills it felt like I was on a 600 sportbike, down two, up one, up one, down one. repeat, whereas the stock combo, the windscreen would shake and rattle as that engine would work to make the bike do what you should have dropped a gear for. I'd say if you ride in the mountains or foothills, leave it as is with the stock ratios.


You can read up on this popular mod for the Versys here.

After having put 1200km on the Shinko 705 combo of mud, gravel, both wet and dry pavement and hard cornering on mountain roads this past weekend riding the Cabot Trail on Cape Breton Island Nova Scotia, I have this to say about them:

Note that I had touring luggage on the bike at all times during the testing.

Note: If you are planning to ride your Versys off road, then look at my posts on fork seals, as you are going to want to learn how to clean those pesky buggers well, or keep your mechanics phone number in your pocket.

The rear tire only lasted 10,000km, and considering that I rode them through some the hottest weather I've ever experienced on a fully overloaded touring bike, while riding from the Island to Ontario and back to watch the Canadian Superbike Double Header at CTMP, I can forgive them and I went ahead and mounted a new set front and rear on the weekend at the same time I replaced the blown stator on the V. I think i did the most damage to them while riding a 902km stretch from Mount Washington NH to Whitby Ontario.

I tried to capture the bulging rubber in the next series of photos. 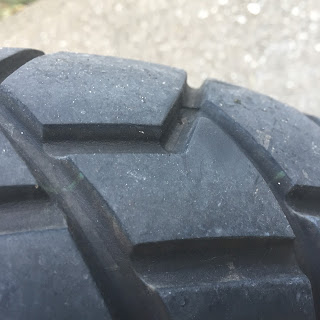 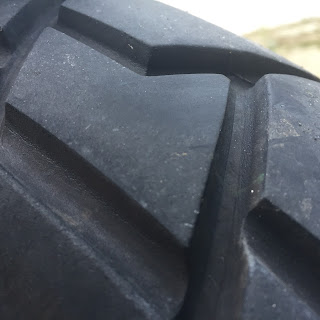 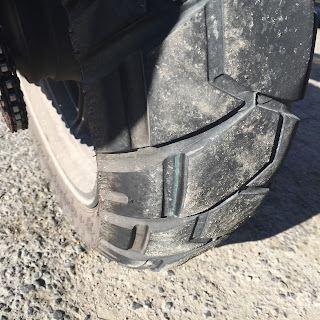 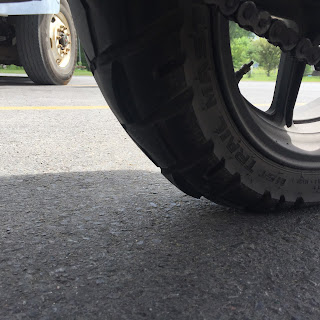 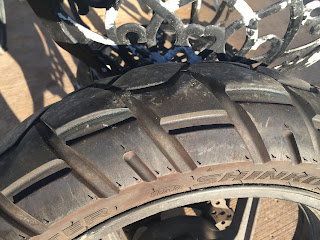 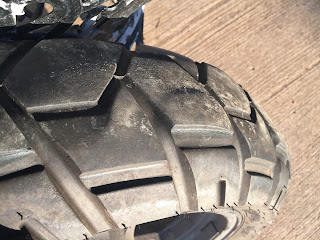 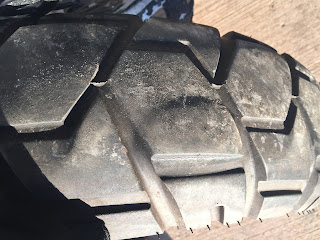 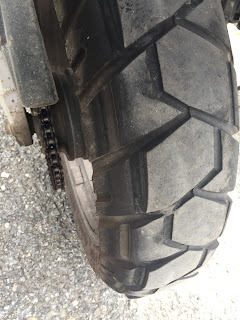 I found a similar issue over on ADVRider while I was researching this.

What did I do? I bought another set from FortNine of course:

Would you like to see what happens when you collect roofing nails with your Shinko tires?

What tires are you running on your bike? 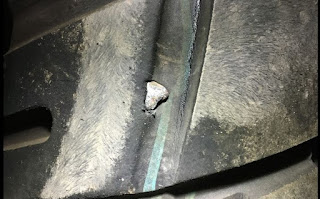 I picked up a nail in the rear tire.

I've yet another set of Shinko 705s ready to go onto the bike later this season, but I thought you should know a couple of things I've found about these tires:
Not all at once, but I now carry a patch kit and CO2 cartridges under the seat just in case.
I'm thinking of going more aggressive if I want to keep up to my girlfriends KLR650 as she got a lot more ambitious on clay and sand covered roads late last season. 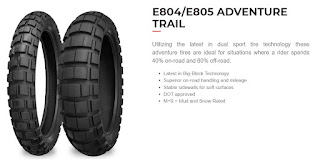