So I went out for a wee rip with my girlfriend last week, that got cut short when I found that my rear tire was quite low on air, down to about 20 lbs, when it should be up at 36 to 38 psi for the rear Shinko 705.

I got to my girlfriends place and aired up to 38 psi, then came and parked the bike in the underground only to find out that the tire wasn't holding air and was all but flat again. The flat rear tire put paid to last weekends plans for an overnight camping trip into New Brunswick, and I got sick which didn't help matters much at all, so while CLine was enjoying the wonderful weather and riding to work, I got practive in calling in sick and pulling the covers over my head. But just to be safe, I bought a new Shinko 705 from FortNine.ca and had it shipped to the office this past week.

Right, now that I was ready for all outcomes (I was worried about a bent rim. Don't ask me about spring potholes this year), I got some gear and headed down to the parking garage to find that as soon as I tossed the bike up on my paddock stand and put the Versys into neutral, CLine drew my attention to the nice bright nail head embedded in the tire. I breathed a sigh of relief, for now it was  a straight forward puncture and I felt pretty confident that I could repair this in one go, test it and still get in a couple hours ride with my sweetheart, the Vers.... Oops, CLine. ;) 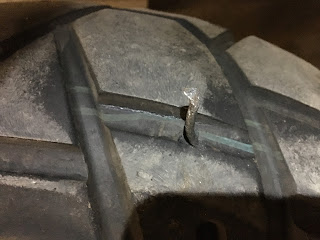 CLine loaned me the use of her tire patch kit that we had used on her Subaru in April when she picked up a couple of nails, and it did the trick. I actually read the directions for a change! AFTER I'd already performed the repair as I wanted to see how long it needed to cure, but I was told to bring it to pressure and do a leak test.
I sprayed on some soapy water, over the repair, it held, so I lubricated the chain, and CLine helped me clean up my bits and pieces.

My nephew rang me up asking if I had a chain riveting tool to loan him, and as that fit into our plans of getting an ice cream from the Somerset Ice Cream Bar in Kinkora, I had the perfect excuse for a test ride.

It held air, and it looks like it's vulcanising already, but I hedged my bet and brought along my air pump just to be on the safe side of sorry. It's a good feeling to have that new rear tire sitting down in the storage locker, ready to go on.

500 kilometers of riding later and it's holding up well and seems to have vulcanized into the existing rubber. I'm pretty happy for the moment.

A couple of days later and I'm leaning into the corners again. No worries.

There is 5,000 km on the rear tire now, and I've no worries about pushing it too hard, although I'm a tad apprehensive about touring on it in the middle of July, but I won't be that far from home and I'll be riding with CLine if it all goes pear shaped. Camping gear can add a ton of weight to a bike, almost as much as a passenger.

C-Line and I rode for 1600 kilometres around the Gaspe peninsula in Quebec, and the tire is now showing signs that it will need to be replaced shortly, now that it has been on the bike for just under 9,000 km now, and I've ridden on the patch for 5,300 km.