If you've ever been out on the highway for a while, you know that it turns into mind and backside numbing boredom, in which your throttle hand remains cracked to perhaps 3/4 rotation... For how long? Until you get there. One, two or three hours perhaps?

Here are a few tips and tricks I've been using over the years to beat throttle cramp:

A cheap ass throttle lock as seen here. I ran something like this on my GSF600s for a while until I upgraded: 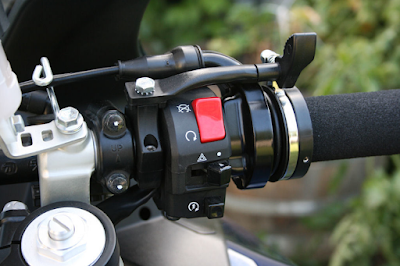 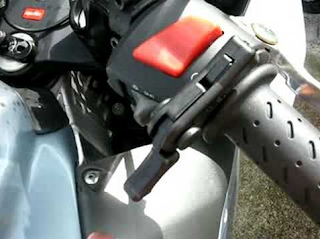 The Vista Cruise that I installed on my VFR was much more minimal than that on my Suzuki Bandit. But there are better throttle locks out there, and some are much cheaper.

I bought the Go Cruise "Mark I" and fell in love with it, as I could toss it onto the throttle just before getting onto the highway, then pop it back into my tank bag when I left the slab and got back onto more exciting roads. The "Mark II" version is beefed up and looks awesome! They do take up some throttle space though. 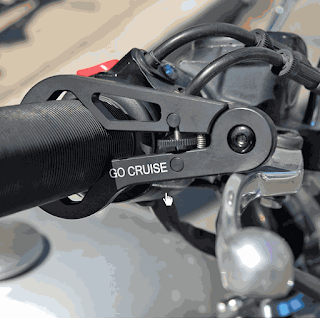 The plastic model is brilliant for quick on and off, then into your tank bag or pocket. A brilliant, inexpensive concept.

Rodney commented on my post in Motorcycle Maritimers with a brilliant idea... 3D Printing!!! 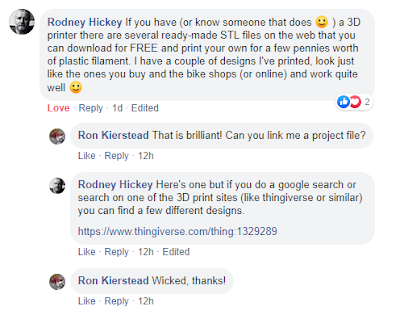 Throttle Rocker and Cramp Buster
I've had this on my bikes for so long that I can't remember when I first started using one. I recall using it on my VFR, so I've had it on the go since 2007 or longer and it's been a love affair almost from the start.

It clamps onto your throttle, and gives you essentially a wrist rest, so you have an extension that when you twist the throttle, part of the palm of your hand is engaged as well, so the leverage increases a hundred fold, and you are much less likely to have a blistered, red, sore throttle hand at the end of a long ride. This never comes off my throttle. :)

I find the ergonomics Throttle Rocker superior to the Cramp Buster, but the Cramp Buster on the left as seen above takes up the least amount of throttle space. Not an issue for me at all, but a new installation might throw you off for a bit. You can always rotate this down and away from your palm temporarily if you need to.

On my KLR I had some vibration on the bars, and many of my friends suggested purchasing the Throttlemeister throttle controls, but I ended up going with something similar in function but cheaper called the Manic Salamander.

The concept is the bar end on the throttle side rotates, and by means of an shim, puts pressure on the end of your throttle tube and locks the throttle. Of course you can override this by simply rotating the throttle tube back to the off position against the friction resistance. It's easy, and becomes a learned habit in no time as you exit the highway onto a ramp, or over take a slower moving vehicle. 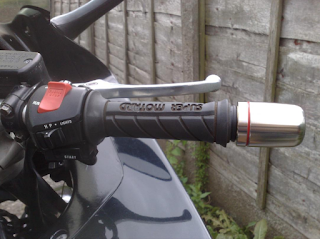 Many of my friends left the ThrottleMeister brand behind and went with the Kaoko throttle control. For price, availability, and the fact that they made a version that would fit a bike fitted with aluminum handguards such as the Barkbuster, Acerbis and Tusk lineup, made it attractive and when I saw a "For Sale" post at kawasakiversys.com, I bought one used for a reasonable price and very happily installed it on my Versys that winter, and it's survived 87,000 kilometres of touring and thrashing. 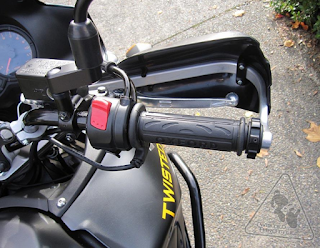 While reseraching this article I came across a mention of the Atlas Throttle lock and how well it was being received by ADVRider inmates, so here it is: 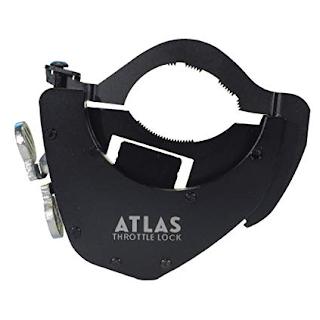 My brother-in-law Kirk bought himself a 2017 Triumph Tiger 800xc that came equipped with factory cruise control, and while he and my nephews were planning their great adventure of 8,000km that year, I talked up throttle locks and the throttle rocker to them. Captain Kirk was very happy with his OEM cruise control, and I could understand, as you could set it for the highway and leave it despite hills and always know you were at the same speed. I would love it for my Versys, but I'll have to install an aftermarket version such as the McCruise aka Motor Cycle Cruise unit i want it on my V, and it's just not going to happen.

The Aftermarket options for electronic cruise control make installation look like a winter time project for those who shelled out the money for new touring bikes, such as Honda ST1300 or Yamaha FJR1300. My friend Matt installed it on his Kawasaki ZX-14 as he loved touring on that bike, and had the spare cash and time to throw at it.

I won't leave the driveway without my Throttle Rocker on the bike, and if there is more than four hours of highway involved on the trip, I'd be double checking that my Go Cruise throttle lock was in my tank bag. That should end up costing about $30 dollars for touring comfort. Not such a hard thing to swallow at all.

Of course you could always get out a coat hanger and a pair of pliers if you can't afford that. :)

P.S. Anything you choose is going to be a better system then George Shuttleworth's TT Qualifier...