Heading out for a 500 km ride for a plate of fish and chips? If you are a fellow rider you get it. If you don't ride, let me illustrate it for you: 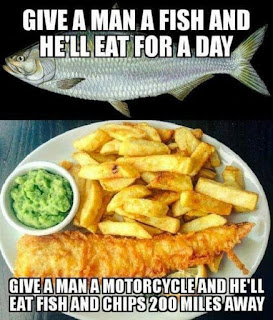 Or as CLine and I enjoyed it, Fish n' chips served at the Boathouse Restaurant in Alma, New Brunswick, a favourite spot of mine since Mike T. first showed me and my nephews the road up to Cape Enrage back in 2009.


We chatted up riding a lot harder and further on Friday night to find that we would rather set our sights a wee bit lower and enjoy the ride than to turn the one day with a decent forecast into a "Dawn to Dusk" rally as the weather just isn't quite there yet. Call me lazy, I'm alright with that. In fact, I embrace it. :)

So instead of a ten hour ride to St. Martins New Brunswick and return, we opted for a shorter ride to Alma NB for lunch, and then a bunch of highway back so we could be sitting on the couch with out feet up that evening. :D

CLine and I making our way across the Confederation Bridge... 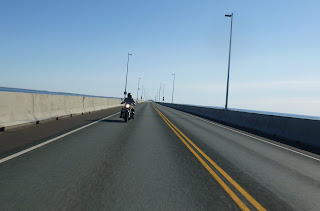 When the day starts off below 4 degrees Celsius then climbs up to 16 degrees for a day time high, you are going to need to dress in layers, and wear everything when you start. As the day got warmer, we stopped and shed layers. This seemed to be the practice all day long. 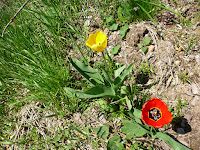 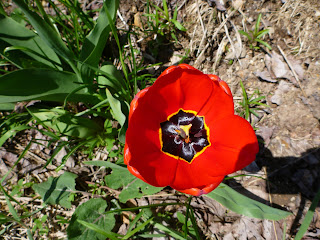 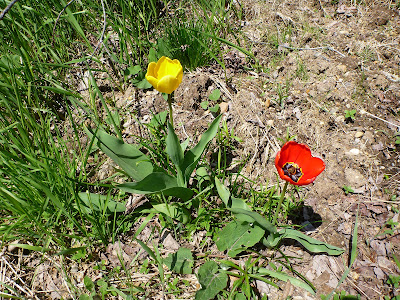 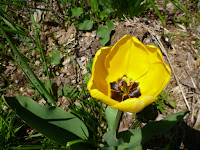 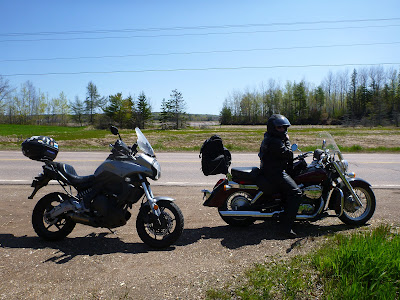 The highest tidal falls in the world take place here, and at low tide you can see a scar of mud where streams and rivers carve their way out into the bay.

If it's your first time here, check the tide tables and plan to visit the Hopewell Rocks at low tide...


The last five kilometres are a real joy to ride as you wind your way into the town of Alma proper. 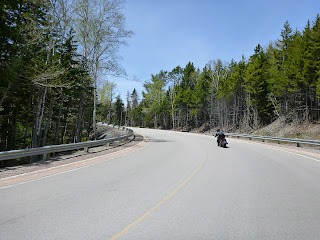 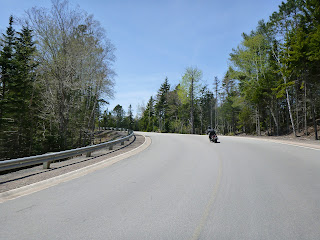 The ground clearance on the 2004 Honda Shadow is quite low, and CLine has more of a problem choosing a good entry speed and line into a corner so she DOESN'T grind her pegs/floorboards mid corner. 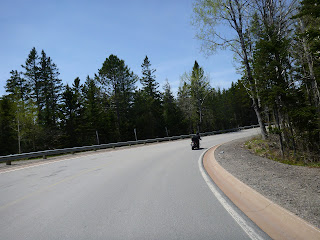 New Brunswick roads are a crapshoot this time of year, especially before the road crews can get out and patch winter damage. Take it easy for some of these holes could set you back a tow truck and a damaged rim. 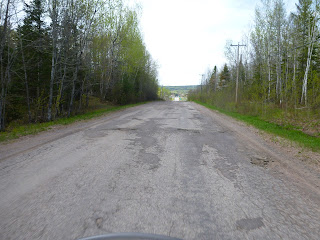 We opted to stay off the 1 as long as possible, so crossed over on 114 then took Portage Vale road as it was heading roughly North East, then 895 North until we hit the Trans Canada and hoofed it into Moncton where we had a date with a full Costco parking lot.

CLine lost me in the parking lot of Costco. My excuse is that I had to find us a spot, and I found a "pulley throughey" up close to the doors, but I'm a mere wean at 6' and she couldn't see me over all the trucks and SUV's in the lot. It was quite the conversation over the Cardo Scala G4s for a few minutes there...


"Costco on a motorcycle. Guaranteed to be a cheap stop."

CLine had a bit of a laugh at herself over on Facebook, as did her friends who asked her to pick up some cat litter on the way home. As it was, we grabbed a package of medium freezer bags, her favourite frozen chinese dumplings, a couple sets of merino wool socks for ladies, and some computer reading glasses, a his and hers set. Most of that fit nicely in my stuff sack, rok strapped to the back seat of the Versys for the trip home, while she refused to let the dumplings out of her sight and tossed them into her cargo pack. I can change dear, honest I can.


If you are coming to the Island from Moncton, skip much of 15 and 16 by jumping onto NB 955 just East of Shemogue and ride through Murray Corner and hop back onto 16 just before the bridge back to the Island. You will not only have a nice little ride down some curvy back roads, but beat much of the traffic and the 16 wheelers that hog 16, and are no doubt following someone's gran who is afraid of hitting moose out of season so drives 20 kph under the posted limit. *sigh* Yes, that is how you get to and from the Island. Either race car fast, or painfully slow, and it seems to be in direct proportion to the duration of natural light. ie, Summer vs Winter.
We ended up back out on 16 just seconds ahead of the conga line of trucks and tourists all bound for the Red Isle, beat them onto the bridge, then stopped for fuel and a cuppa coffee on the other side at the Borden-Carleton Esso.


Once back home we both agreed that we'd had a wonderful day, but tomorrow's forecast called for 100% chance of rain, and 0% chance of morning alarms.