Electrickery and the Versys Stator

A couple of weeks ago I was returning to Prince Edward Island from a trip to Ontario to visit family, friends and attend Round 5 of the Canadian Super Bike races CSBK, when my charging system died and left me stranded on the roadside just outside of Quebec City on QC Route 138, the South Shore.

I have to admit it's my own darned fault as I have a volt charge level indicator that I installed on the V back when I first bought it in 2013, and it was giving me warning signs earlier this season, but the bike was still running well, and it wasn't until that morning when it told me that I was "breaking even" on charge, then later on, "discharging" as opposed to the "charging" that I was used to. I'd become complacent as to the reliability of this bike, for it's not failed on me for the fives years and 70,000km that I've owned it.

Anyhow, I couldn't get a stator shipped to Quebec City in time to make it worth my while remaining there while it was serviced at the dealership, so I towed it back to the Island and stuck it away in the garage, and ordered an aftermarket stator from FortNine.ca as well as a couple of new Shinko 705 tires as they were pretty much toast at 10k.


First I dropped the oil, then tried to remove the side case. Tried. There is a magnet in there that really had a good grip on that stator, so I needed a extra bit of mechanical leverage to break the grip of the old gasket material and that magnet.

Right. I now had an easy task of removing the old stator and installing the aftermarket RM Stator, being very careful to route the wires so the counter weight rotor and magnet would never come near the wiring as it spins in very close proximity to the harness.

Rick's Motorsport stators come well reviewed, and I had a friend or two that suggested I'd never need to worry about the stator again once installed. 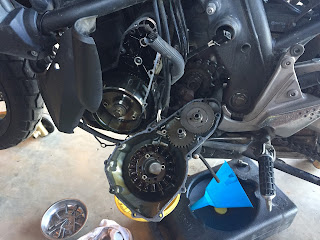 Once again, I'll stress that routing the wiring properly is the single most important thing you can do.

I've learned that nine dollars worth of dielectric grease goes a long way, and I never separate a connector without using a dab or two to waterproof them.

I used a razor blade scraper to carefully remove old gasket material and sealant to create a good mating surface for the new OEM Kawasaki gasket that I had in hand, all $12.56 worth of oil retaining goodness.

This created a bunch of debris that wants to fall onto the counter weight, and into the new stator, so have a rag or two handy to cover and clean the parts.

Time to grab that gasket and see if I can get it back together again...

Bugger was that side cover hard to get back on! First the gasket is metallic and would stick to the giant magnet pulling it out of shape and into the case itself.

Second, those gear teeth would NOT line up, especially as the magnet would grab hold of the stator and pull strongly from the bottom so I had enormous difficulty putting the case on perfectly vertically.

Third, those gear teeth refused to line up with the starter shaft and locating holes, and the gear pins didn't like locating into the side cover again.

And that flipping gasket! No sooner would you get the cover almost on when it would slip out of alignment and stick against the giant magnet again!

I think I had the old cover and stator off and the new one installed in the case in under an hour, but getting perfect alignment of the side cover and gasket to get it to mate seemed to take two hours! Done! It finally mated correctly after I got pissed at the gasket and dabbed a bit of silicone on so it would tack onto the block and stay put for two seconds!

Now to fill it with oil and see where my charge levels were with the new stator.

You are looking at the voltage indicator installed on the right "dash" panel, the red light indicates discharge at 1350 rpm.
I revved it up to over three grand, and the indicator shows charging! Coming off the throttle shows continuing to charge even at 2500 rpm.

Fantastic, and just in time for the long weekend!

Almost a year and 10,000 kilometres later, the RM Stator is still doing it's job and I'm a happy camper. No complaints.

I ran an extension from my battery tender cord up into my tank bag so that I could either charge a power bank or cell phone in the tank bag while touring, or I would be able to plug my heated gear into a "high" connection, and not have to sit on that infernal coiled cord. It was okay for short trips, but would really bother my inner thigh if I put some miles on, plus I'd inadvertently smack the switch off at times. Moving it higher up and routing it through the fairing was the perfect solution.

BUT, I messed up the stator connector from the RM stator (white female end) to the bike's regulator/rectifier side (black male). At first the symptom was dead easy to sort out. The bike stopped charging and almost left me and my girlfriend with a dead bike in a parking lot five minutes from home! My troubleshooting fixed that problem by repairing the female portion of the connector, or so I thought.

Pictured below is the connector as it appeared in May after I'd messed up and knocked it about while running that extension. You can clearly see the arcing on the one connector. I thought I had it sorted out and the bike was charging again.

At rest with a freshly charged battery, I was getting 12.35 VDC at the battery tender cable. 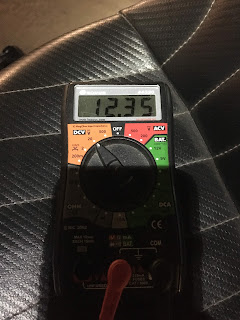 Once I'd sorted out that connector by slipping in the blade of my pocket knife and squeezing it closed a bit, the bike was charging again! Sweet! Done like dinner. 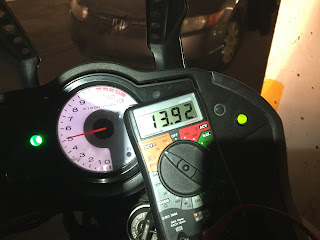 Fast forward to August when my headlights stopped working. First the low beam, the bulb had blown, and I sorted that the old fashioned way with a trip to Canadian Tire and $18 dollars. Then both low-beam and high-beam failed on me, and while reading a thread on kawasakiversys.com I found that checking the stator lead would be a good start, and low and behold I found the arcing was more severe, and that when I'd squeezed the connector back together in May, it had made contact, but had pushed the female terminal out of the white shell. It was a poor high resistance connection that was "Makin' and a Breakin'" all night long.. Darn it! 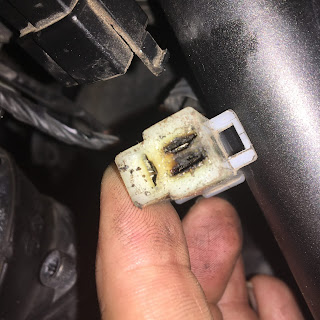 I really need to replace the lower connection completely but I settled for ensuring a good solid connection on all three of the terminal leads, and at this time, everything is running the way it ought to. My girlfriend Caroline is going to fetch along some of her butt and spade connectors in her tools just in case she needs to fix my broken bike. :)