2018 Following the Unicorn on the Sunrise Trail

My Versys lives again! Risen from the dead after two weeks of purgatory, I had to get some two wheel therapy in, and Mikayla's post in Red Isle Riders was just the prescription I needed! I'd rushed to get it ready in time for Labour Day weekend!


Anyone interested in joining me and Lorne on the sunrise trail tmrw??
Leaving montague at 10 am and taking the 6 oclock ferry home!!


Ooh!!! Pick me! Pick me!
Thankfully I woke up in time to post up and get included, but I was groggy and confused the poor girl with when and where we would meet up. I thought they were going to meet me at the Borden-Carleton Esso for 11:30ish, but she thought I meant the Grafton St. Timmies for 11:30, and while I was minutes from B-C, she and Lorne were drinking their coffee at Grafton wondering WTF I was...

Leaking gasoline from an overfilled fuel tank onto the parking lot, dontcha know, wondering WTF they were... And no chance of a coffee for me, for it is the great Exodus on the island, where all our summer time guests flee before the advent of the dreaded "End of Season" and "Back to School". A flurry of text messages later and we had that sorted and they flogged their bikes down the Transcanada to meet up with me at 1230ish. (Before you ask, to "Flog" ones bike is to beat it with a crop and rowel it with spurs in order to obtain greater speed)

Lorne asked me to show them the fun way to get to Port Elgin, but he knew the best place for Bridge pictures, so we stopped under the bridge to get a few great shots.

I took the lead, and we ran across 16 to the second exit onto NB 955 that would take us through Murray Corner NB, and if we had kept on, out to 15 and into Moncton, but I knew we could take a back road back over to 16 near Port Elgin, so we had a great little ride while avoiding that conga line of tourists and transport trucks fleeing the island.

I admit, I was a bit worried that the road I chose to cut back over to Port Elgin turned to gravel at some point, so I skipped Blacklock Road and made the mistake of taking them down Davis Road. Blacklock would have put us back out onto 16 just before Port Elgin, whereas Davis Road had been tar and chip sealed, and with the light traffic it got, there was a lot of loose limestone right through the intersection, and poor Mikayla had to practice her loose surface motocross skills. I think she white knuckled the whole four kilometer stretch back out onto 15 where we had to turn back and head back towards the roundabout and in through Port Elgin. If you guys had only mounted some more aggressive tires we could have cut cross country. TKC80s anyone?


I pulled in here cause I figured Lorne would have a good nic fit on by this time, and when I told Mikayla it was "Smoke Break time, here is yours" she flatly told me "I don't smoke". "But you do eat chocolate? Eat the red ones last." and handed her a pack of Smarties. "I like you, you can ride with me more often." :D

Lorne went off to chat up some riders from Halifax bound for PEI for an overnight. He breaks the ice, and they wandered over to admire Mikayla's helmet horns. Turns out the male rider of the two had previously owned a 2009 Versys as well, and tried to convince his female friend that this could be her next bike. I sheepishly admit I tried to sway her too, not that I am in the least bit biased.

Someone started to gear up, and I thought it might be nice to keep the group together so, I got my stuff on too, and took the lead again until we hit Pugwash where I stopped once again and offered up the excuse that I thought they would like another break. Mikayla looks at me like I have two heads, and pipes up with "I'm good." forcing me to tell her the real reason why I pulled over, the gated entrance to the salt mine was chained closed, and I could use this gravel parking lot to get onto the access road for pictures of the salt docks, of the Windsor NS Salt Mine. Lorne was happy, he's a self professed "Train nerd" and wanted to check out the historic train station on the other side of the lot, so I got to take my pictures and hand off the "Leader of the Pack" BS to someone else. :)


Lorne, our tour guide, told us a bit of the history of the station, and the industries around it, and finding out that he was a history buff as well as a train nerd made him good friend material right on the spot as I love history, and if you follow my blog, you will see evidence of my passion on almost every ride I do.

I gotta tell you that while I was leading, the Unicorn was setting the pace, hanging back just a bit, so I thought I was going a tad fast for him, and settled for a wee bit less than my usual warp factor 7, but once the Unicorn got in the lead, suddenly Warp factor 7 was not good enough and I had to wick it up to Warp factor 9 if I didn't want to get left behind!

The Unicorn was getting hungry and suggested that we stop in Tatamagouche NS at Big Al's. It was a great idea, and all three of us ordered a coffee before perusing the menu. Once Lorne mentioned the hot hamburger sandwich as interesting, and I found that it came with grilled onions, I was sold.

We left the Unicorn waiting for his feed while Lorne and I went out for a smoke and a bit of bromance as we chatted about Tottenham ON and Newmarket ON, until Mikayla interrupted us with a text that our food had arrived. Awesome! Damn Lorne and his "They have cake in that fridge over there!"
"Is there any lemon cake in it?" I asked.
"I never made it past the chocolate cake", was his retort.
Mikayla read off the dessert menu "Lemon mousse cake". Darn them! One chocolate cake for Lorne, one carrot cake for Mikayla and the Unicorn, and one Lemon mousse for me!. Mmmm!

Just when I was getting ready for my afternoon nap, Mikayla and Lorne dragged me off to see the Tatamagouche Train Station Inn, which was probably a good thing as I certainly needed to work off that lunch and cake.
While I was clearance sale shopping in the gift shop, the three of them abandoned me and disappeared without a trace, so I tossed my new purchase into my top box, geared up and rode the Versys around looking for them, to find that in Nova Scotia, you are encouraged to ride your ATV or motorcycle responsibly while sharing the old rail bed with others. Great idea says I, and with my brand new Shinko 705s, I decided a quick tour on the "Discovery Trail" and was pleased to find it well signed and regulated for the safety of all.

Hey! There they are! Trying to break into that old dining car and make off with the silver spoons! That Unicorn is a bad influence! I called them on it at once, but that shifty Lorne says "You have it all wrong, it's the recreation of that classic scene from the movie Titanic!"


Once the Unicorn was back in the saddle, we made good time to Pictou NS, but one of us, not naming any names, needed a Timmie's, cause that chocolate cake he'd put away was making Lorne sleepy, so after buying a round of coffee, we sat in the parking lot and made conversation about what makes the world go round, bikes of course.

Time for the ferry, and not trusting the Unicorn's capricious sense of direction, Lorne lead the way out to the ferry, as he has a personal connection with over and above that of a passenger, as he likes to think of himself as a marine mechanic, and has worked on the "Holiday Island" a few times, but I told him that if he really was any good, he ought to have been able to get it right the first time. Not to worry, it's only bruising and I'll heal up quickly no doubt.

I caught Mikayla clearly in violation of the rules and was going to report her to the captain and have her keel hauled or strung up at the gratings by her thumbs for a flogging, when she explained that the Unicorn made her do it. "Well, that explains it, let's go!"


Lorne wanted to show us his babies, and I'm glad he did, as I really enjoyed our brief tour of the engine and generator room. He insisted we don some safety gear before entering, and I'm very glad he did, as the noise at IDLE was loud! He said once underway it would be even worse, and we'd have to leave shortly. 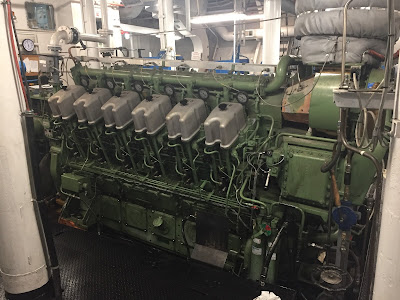 The addicts stampeded past Mikayla and raced out to the ever shrinking smoking area for a puff, and Lorne got to have a play date with the Unicorn. 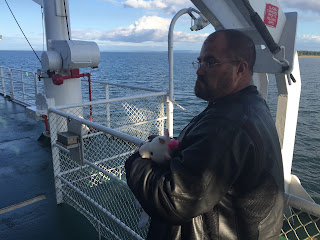 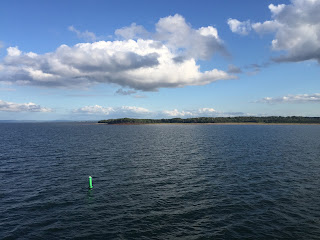 How do you make this day perfect? You head on up to the deck and find that it's turned into a dog park for the ferry ride! I was in heaven meeting and greeting puppies of all sorts and breeds, and I think Mikayla made a friend. The collie even rolled over for belly rubs. :) 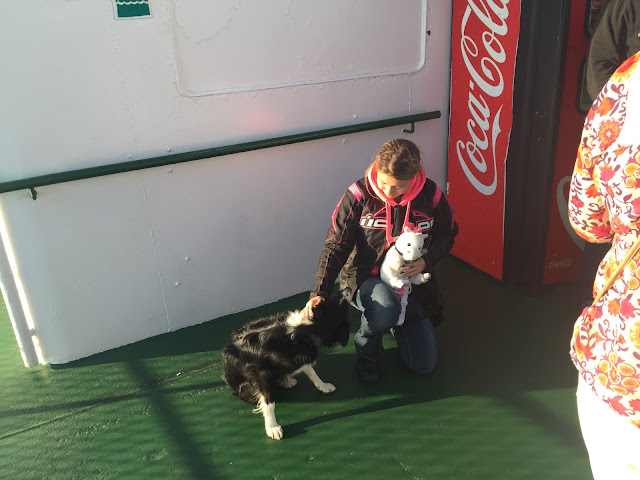 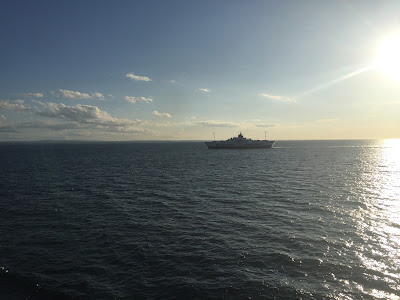 This guy walked up with his unleashed Border Collie bitch, and I was reminded of the bond Suzi and I had when walking off leash together. Suzi figured I was well behaved and didn't need to be on the leash as long as she was there to supervise me. It looked the same way here, and I envied them their bond, as I miss my dear Suzi so much.

"Where is that, Lorne?"
"That is Prince Edward Island, my dear."

It was time to leave the ferry, and to go our seperate ways as they headed East, and my path took me West, and back to Charlottetown where I had to duck into the Timmies to see if any of the gang were hanging out tonight. Nope, but I did have a nice cuppa and a chat with my Dad when I told him that I'd met a gentleman on the ferry that grew up in the same small town as my old man, Hampton NB. Luv ya Dad, and can't wait to see you when you visit Wendy-Sue and I this September.