There was no plan. So this isn’t really about a failure at all, as I had promised myself that I would do grownup things on Sunday, like dishes, laundry and cleaning, but when my riding partner of the Fundy FunDay ride offered free tea in O’Leary Prince Edward Island, all I could think about was Medium or Large and how quickly I could tighten my loose chain that morning before meeting up with Caroline?

She lured me under false pretences to meet up with her in Charlottetown, with a cuppa tea and a ride on the Island as the bait. I can’t place all the blame on her though, as I enjoyed the thought of riding with her again and was quick to take her up on the offer. I'd just finished tightening the chain as she rolled up into the parking lot of the Grafton Street Tim Horton's in Charlottetown, and listened to her lies about our destination, and how we would get there. Oh, she made it sound soooo good, and when I innocently asked her if she wouldn't mind stopping in at my sisters place so I could spoil my four footed friend Zippy, she quickly agreed, and we were off winding our way through Charlottetown traffic with me in the lead, just as she had planned.

Hindsight leads me to believe that she wanted to lull me into a false sense of security by letting me have my way as long as it had no bearing on her scheme. And I admit to falling for the bait, hook line and sinker, thinking that there could be nothing better than introducing my friend Zippy, the Jerk Russell Terrorist to my new friend Caroline, and getting to meet the newest addition to my sister's family, Mosby, a four month old mutt that was mostly Jack Russell with a bit of Blue Healer, and tons of sass in him.

As we were rolling through Summerside, that 30 percent chance of showers in the forecast seemed to mean that if we turned back and rode the way we came post haste, we might have a 70 percent chance of staying dry, but it was not to be, for even the immanent threat of rain would not deter this girl, and I found myself riding through Miscouche until she turned south on Lady Slipper Drive, then north onto Route 11, all while we got 100 percent wet.

The good news is that underneath that gray sky there was a line of blue, and after only a few minutes the rain tapered off, and the road started to dry out as did my visor.

Prince Edward Island is the home to a rather large Acadian population, fiercely proud of their heritage, with the yellow start bedecked blue, white, and red flags seen everywhere as we rode further north along the coast. Caroline pulled over in front of Église catholique de Notre-Dame du Mont-Carmel, a landmark that is impossible to miss on this side of the island.

For the first time I examined one of the crosses that stand atop each fence post to find that they are all individual, and placed there in memoriam of an individual or family.


We headed further north along 11, until I I simply had to take a couple of shots, and Caroline pulled a U-turn to come back and get a couple of her own while I captured the "Truck on the front lawn" version of rural Atlantic Canada.


I thought Caroline was going to turn north onto 11 at Abrams Village, but we continued our merry way on 124 through Urbainville, and I'm glad she did, as when she realized her mistake and pulled into a vacant parking lot to explain, I said I'd be just up the road taking a couple of shots of the hay bales and dark rain clouds in the distance.


We managed to make the corner onto 11 north, and had just passed a pond off to the right when Caroline pulls over in a church parking lot and asked me if I wanted to go back and check it out. "Sure! Let's go!", when clearly I should have responded "Bien sûr, allons-y!".  And so we were introduced to Arsenault Pond in Egmont Bay PE, a cozy little place that was simply bright with sunlight, bees collecting pollen, and the odd duck or three.

I was duped. Completely oblivious to the fact that she had lured me to this remote oasis of beauty in the middle of nowhere where her the final phase of her plan could be put into action... 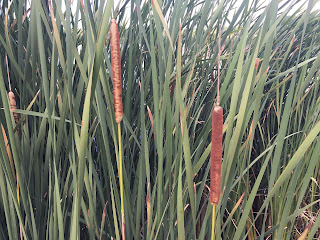 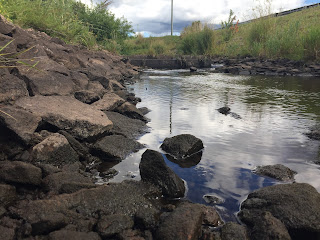 Did I mention that it was a brisk 16 degrees celsius? But not at the pond. The sun was overhead and it was warming up quite a bit, and after walking around for a while we stripped off to take advantage of the warm sun... Or rather I tried to, for the of my jacket's zipper refused to release, and Caroline wandered over to help me with it , but in the end I had to pull the jacket over my head and wrestle with it for a few minutes before it finally let go, and this is the replacement zipper I had put in a few years ago. *sigh* I can just imagine the next text message...

"Hi Caroline, how is your ride with Ron going?"
"Sorry, can't talk now, I'm helping him with his zipper."

Why did I entitle this the O'Leary ride fail? We found ourselves talking, then holding hands.

"Brace yourself, I'm going to kiss you."

Swellegant, ain't I? Suave, sophisticated and debonair are characteristics that I can never be accused of, but I can pop a decent wheelie and get my knee down in the corner. I can tell you where this is going, one parking spot for the bikes at work. Extra input in the planning stages for the rides, and someone to share the pain of PMS - Parked Motorcycle Syndrome this winter. :D

The plan? To find out if I wanted to keep adventuring with her until the cold drove us in doors and the bikes had to be put on battery tenders for the end of the season, and it turns out I'm totally down with that. I envision two batteries hooked up in parallel waiting for the spring, isn't that romantic? :D 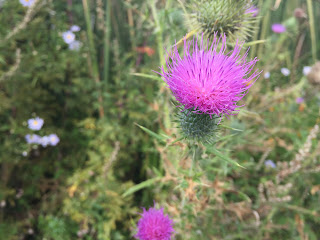 It was getting on in the day, and time to admit that we were never destined to reach O'Leary today, so Caroline took the lead and we headed into Tyne Valley for supper. 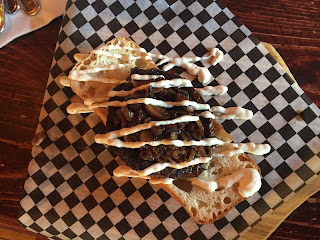 Back into Miscouche, watching the setting sun illuminate the beautiful yellow canola growing in the area and through Summerside and on into Charlottetown, but not the direct way, oh no! We were doing fine until she let me take the lead and I took us onto Blueshank and a few back roads that led us right back into the loose gravel construction site I'd managed to avoid earlier during the daylight! Then to add insult to injury, I took her down my favourite road in the area only to find that I'd forgotten the last kilometer of it was a dirt road, so I slowed down, keeping my pace to what I thought would work for a Shadow, but she passed me! Game on, girl!

For revenge she turned south off of Kinkora road onto Route 13, or "Snake road" and waved me ahead of her. I wicked up, turned on my high beam and really enjoyed the first couple of corners, but soon realized that as much as I loved this road in the daytime, I simply couldn't see the exit and was in danger of looking for firewood the hard way, that is with a mitt full of front brake hurtling off into the woods snapping branches and saplings until I hit something that snapped me. Nope, not going to happen so I slowed down and admitted to myself that I'd much rather get home in one piece. That was the warmest part of the ride for me, after that the cool air seemed to get colder and colder. The heated grips got turned up and up until I could feel the heat on my palms and had to turn it down again. This the first decent test of the new aftermarket stator, and it passed with flying colours.
We stopped in Cornwall as the Shadow goes to reserve around the 200km mark whereas the Versys hits it near 300km. (Shhh! Don't tell her that I plugged in my heated jacket! She'll think I'm a wuss!), and later on at a convenient Tim Horton's to warm up and chat some more.

Kinda neat to be holding hands with your riding buddy, don'tcha think? Try it out sometime, but not with my girl, she's taken. ;)

Look for the two of us off island next weekend, perhaps St. Martins or Advocate Harbour again. Cheers!

P.S. I felt so guilty about plugging in, that I'm loaning her my heated vest for the next ride so I can ride in comfort and not pretend to shiver with cold at the next stop. I'm not that good an actor.