I didn't get out on Sunday, in fact I was a lazy slug and did little beyond doing the dishes and watching a couple of movies, so I decided that I had to make up for it by getting out for a good long ride on Labour day, the holiday Monday, but like an idiot I was up extremely late, and wasn't mobile til after ten when I posted up in Red Isle Riders to see if anyone wanted to join me last minute. Nope,

I was on my own, so after a wee coffee and breakfast at Tim Horton's, I hit the Trans Canada bound for the Confederation Bridge, and as always, Murray Corner NB, down the 955, at the second exit off of the bridge. I whipped through there, and took Blackstock Road which took me back out to 16 and a short run through Port Elgin and Baie Verte when I mistakenly jumped onto 16 again and headed out to Highway 2. I needed to gas up, so left the highway for yet another Tim Hortons just on NS Route 6 where it meets Highway 2, then headed south west for Joggins on the 242. It's a lovely little road that heads along the Bay of Fundy past lush pasture and diary farms, and then on down to Joggins NS where it hooks up with the 209 that would take me along the coast and through the Raven Head Wilderness area.

Just outside of Joggins I spotted a newly bulldozed road out to what I presume will become someone's cottage lot, but for now it was a great means to take some pictures of the Joggins Fossil cliffs from afar, so I bumped and bashed my way down the rough road and out to a hilltop overlook of the shoreline.


A wee bit further to the south is Old Branch Shulie Road, where a bridge used to span the estuary, but all that is left are the massive pilings and some rebar. It makes a great vantage point for the photographers... Three were pulled in when I arrived, making the fourth. Euchre anyone? 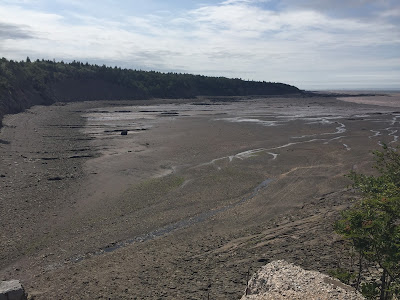 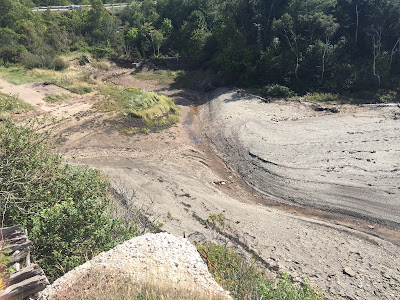 I hopped back on the bike, but when I crossed the Shulie River on 209 I had to stop yet again. I'm pretty good at checking my mirrors and doing steering lock U-turns these days. ;)


The curves on this road aren't marked much at all, yet they see a lot of traffic, so when you do see a warning sign of a curve ahead, you need to take heed, and the warning before a chicane that leads to this bridge is a yellow checkerboard. Be careful here, as it's a tight right then left onto the bridge, and cars will tend to miss the corner and spray pebbles out onto the road. Ask me how I know...

I knew I was going to head out to Chignecto Bay Provincial Park to get a few shots of the shoreline and the Cape in the distance.

I headed on towards the beach where I watched my buddy Brian dump his KLR a couple of years ago, and made friends with a local KLR rider Allen, who showed us how it was done. That shale at the foot of the concrete breakwater is deceptively loose, and I did not relish asking any of the beach combers for a hand in picking up my Versys so I stayed safely on this side of the breakwater. Wuss! Yep, that's me. 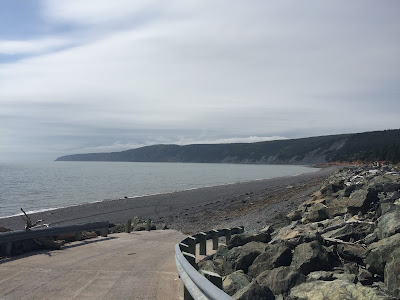 The breakwater has been enlarged in recent years, and the collection of driftwood is magnificent leading me to believe that this is the ultimate in lee shores, and I can't help but wonder if many boats and ships met their end upon these shoal waters. 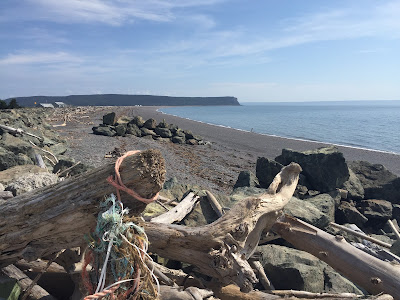 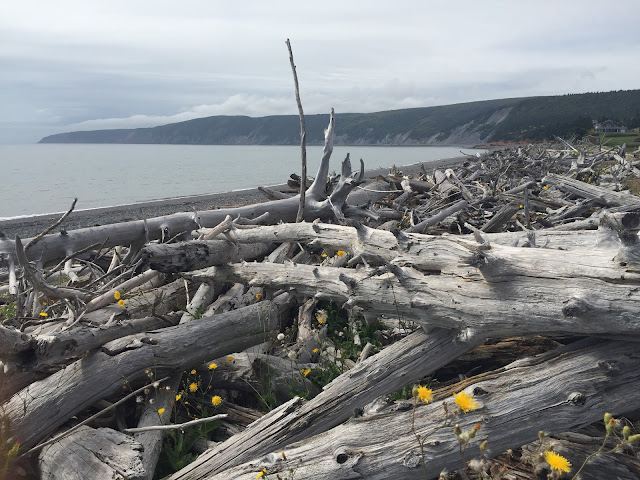 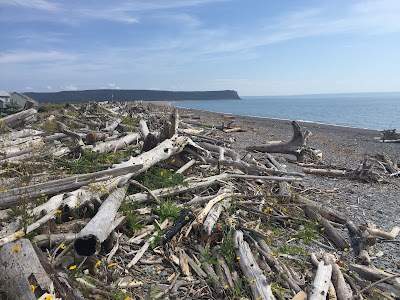 The must have some pretty awesome bonfires out here... 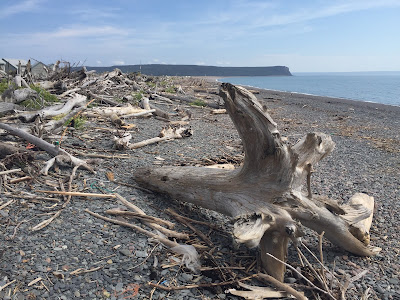 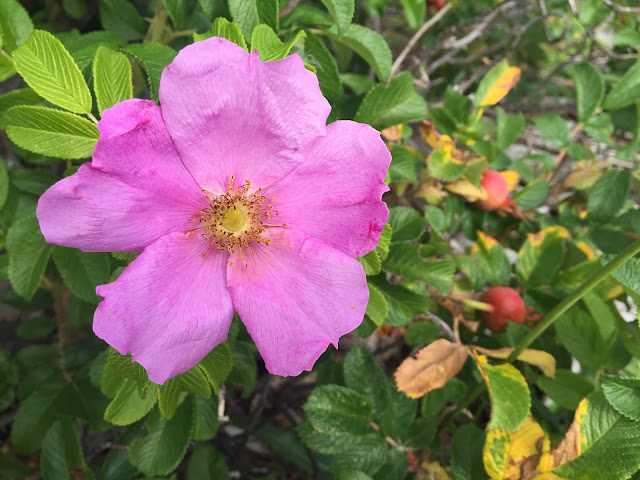 Wild roses line the inland side of the breakwater, and the hips? are the size of crab apples! 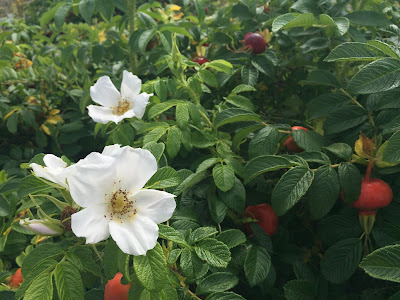 Sadly man makes his mark every where he goes, and the detritus of the commercial fishery is evident as netting decays on the wrack. We dump so much into the oceans these days, and not much of it is biodegradable anymore.

I was able to ride right past the Irving Gas station in Advocate, as I'd hedged my bet and topped off in Amherst just in case the pumps were closed... 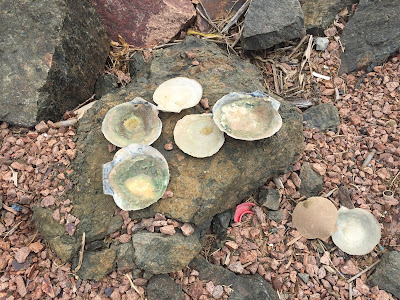 From Wikipedia:
The Cape was named by French explorers (Cape of Gold) because bright native copper deposits appeared golden. Samuel de Champlain explored the copper deposits at Cape d'Or in 1607 and bestowed the name Port of Mines on nearby Advocate Harbour to reflect the seams of copper ore at Cape d'Or.

I spotted a couple of bikes in the Wild Caraway Restaurant in Advocate, and swung in to see if my buddy Allen was knocking around, but they appeared to be small sized dual sport, a Yamaha XT225 and a 2009 Kawasaki KLX250. I asked a couple of the staff who rode them, and an older woman laid claim to the Kawi, and said Sarah owned the Yamaha. She lives just a wee bit down the road in Spencers Island, a short five minute ride, but she left home early and took the long way, pointing out a steep descent in the distance, a clay road that she'd come down, saying she even spotted a black bear out and about this morning on the one and half hour ride to work. She is definitely my kind of girl, but I'd have to switch to my XR400R if I was going to have any chance of catching her. :P

Out on the grass were a clutch of spiders, but one had it's carapace in bits all over the grass, as one of the bulbs had burnt out, and the pilot carries spare bulbs and a pretty comprehensive took kit. Yeah, one of them didn't have enough cargo space, so tows a trailer as well! Makes me look really hardcore with my top box full of "Just in case" stuff, like water and my rain gear. :) Do NOT buy one of these things unless you like extensive DIY jobs where you need to remove seven pieces of fairing to get at a bulb. Seriously, it was in pieces all over the place!

I'm always amazed at the height of the tides in the Bay of Fundy. See boats resting on the bottom between tides is just so foreign to me.
My Garmin was telling me that I was more or less about three hours from home, and as I wanted to be back in time for supper, I headed back onto the highway and began the ride across my favourite part, the Southern shoreline, as it has some wonderful elevation changes and incredibles curves that remind me of Cape Breton Island, and the very reason why I moved out East... Well, one of the reasons, but you have to admit, it is an excellent one.


Guess what else they grow on the south side? Blueberries, and it would seem that today was the day to harvest them. A young lad is earning some Back to School money by helping dad with the blueberry harvest today. I wonder where they will end up in the market? Locally, across Canada, or in your Eggo waffles?
I've put about 800 kms on these tires over the weekend, and the Shinko 705s are performing very well. I'm tickled with them.

I passed one cop the entire ride, and I had to check my mirrors for brake lights... You know what I mean. I always tend to wick it up when on my way home. Doh! Doesn't everyone?

I skipped the Parrsboro route, and headed north on 2, then over to the 302 and stopped for a coffee at McDonalds in Amherst and took advantage of the wifi to order Dominos 1/2 price Monday night Meatzza, for carry out on University Ave, but the mobile version of the website is harder to navigate then there regular website if you can beleive that, and I had to call the store to tell them that I'd be there in under two hours, not in 19 minutes. I was afraid they would toss it out or sell it to someone else. All those lovely onions and green olives... Mmmmm! I get lazy on ride nights.

I headed north on Main street aka NS Route 6 aka The Sunrise Trail in Amherst, then hooked up with the 366 up to Tidnish Bridge and on into New Brunswick on the 970 over through Baie Verte.

You saw this on Saturday. Quit staring and scroll down!

I scooted out to 16 through Port Elgin, and thought about getting gas at Hardy Road Petro Can, but I still had two bars, more than enough to get back across the bridge. But even then I opted to ride number 10 through Cape Traverse and on into Tryon PE where I opted for 116 that would avoid the Trans Canada and let me test my gravel skills along Victoria Road. Oh what fun, every time I'd hammer the throttle, that brand new chunky rear tire with lighten the front end and roost! Fun!


It was the golden hour, when the sun lit up the hay fields and I had to U-turn and get this shot, but sadly the iPhone has a horrible field of view. Go see it for yourself. Magical!
Strangely enough, Victoria road runs through this quaint little town by the shoreline, but I've no idea what it's called.


And again in case you missed that last one: 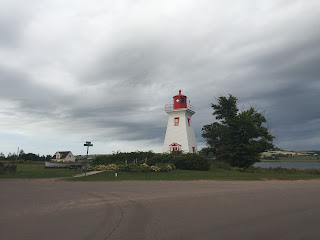 Looking across at Hampton PE, not to be confused with Hampton NB where my father was born and raised... Although they both strike me as really tiny.

And again because I love the colours and the temperature of the lighting. You wouldn't understand and it's my darned blog!

Rip down the Trans Canada, dash into the dollar store for some portable chocolate desert and some whole cumin seed that was on clearance for LESS THAN A DOLLAR, the fools! This stuff is gold and will turn an ordinary chilli into food porn. :) Grab my pizza, stuff it into the top box and counsel oneself NOT to do any wheelies enroute home with the pizza unless I want an impromptu panzerotti instead of a pie, whip across Grafton to check out the Timmies, but none of you were there, and zoom down into the darkness of the underground to park the bike and finally kick off my boots and relax... Ummm, grab a computer and sink two and half hours into blogging?

Hahaha! I had a fantastic run, and hope you enjoyed tagging along with me today.

Note to self, lube and tighten chain before next ride... I stretched it like taffy again. :P