2020 Installing a Brake Light Flasher on a Honda Shadow

CLine was insanely envious of the Brake Light Flasher that I installed onto my Versys back in 2013. When I apply my brakes, a clever bit of electrickery strobes my brake light three times quickly, then goes on full solid, to alert motorists behind me that I'm about to do something (stupid? unique? entertaining?). The idea is it attracts their attention much better than simply oscillating between an always on run light and extra bright indicating the vehicle ahead is slowing down.

CLine and I were talking about the legalities of the devices, and I told her that if anyone comes up to her and objects she should say... (She interrupted me at this point)

I really couldn't argue with that, and it was ever so eloquent when compared to the diatribe I was about to launch into. It is supposed to enhance a riders safety, as the only thing we have back there to let folks know what is going on are three small indicators, one of which protects your life by alerting people behind you, but it is usually smaller in size than a softball. Anyhow, I've put over 200,000 kilometres on various bikes that mount them and have not once been questioned by law enforcement nor border/customs officials.

Right, I'd managed to scotch our plans for a ride last Saturday by sending an Inter Continental Ballistic Missile ICBM through my rear tire while out on a ride on Thursday night around Canoe Cove, and as my tire was flat, useless and the glue on the plug was still wet, we opted to head over to Caroline's place and get started on the installation of the GS-100A Strobe Controller for LED Stoplight that she has had for a couple of weeks now, as she finally had all the bits and pieces she wanted to make it happen.


There are a ton of installation How-Tos on the interwebs, so I'm not going to steal their thunder, suffice to say that I'll try to give you some model specific details for a 2004 Honda Shadow.

CAUTION!!! Some viewers may find the following images of a well ridden, dirty, adventure wanna be Honda Shadow disturbing or offensive. Those offended may want to ensure they are comfortably seated, have their pacifier/soother along with a blindfold close to hand, and a Sharon, Lois & Bram recording ready to play. Or as Caroline puts it "sorry not sorry for the filthiness of my bike".

1. You will want to have the drivers seat off so you can access the three connectors protected by a rubber sleeve that rests on top of the battery cover top thingy. 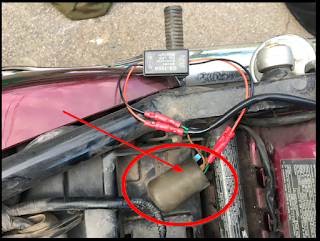 2. Locate the one with three conductors using a white plastic connector. The three wire colours are: 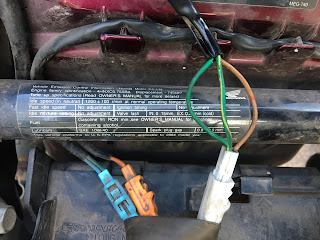 3. On the male portion of the connector whose wires head towards the rear of the motorcycle, Cut two of the wires leaving enough room at the connector to solder or splice in the future. I would leave minimum 3/4" at the connector side. You want to cut the green and the green-yellow stripe. Leave the brown run light untouched.

NOTE: My friend Jeff  advocates purchasing identical harness connectors so the bike can be put back to stock easily for sale or for inspection if needed. "...I cut nothing.. always make or buy adapters to plug in and go back to the way it was." I've since seen a diagram where the installer cut only one of the wires, and simply connected the other wire in parallel. I've added this below for your reference. It's always a good idea NOT to cut unnecessary wiring if you can manage it.

4. For reference, the wiring diagram breaks it out as follows:

5. Orient your GS-100A correctly, and connect the "IN" side to the forward part of the motorcycle, and the "OUT" to the wires continuing on to the back of the motorcycle. My girlfriend opted to use bullet connectors to do this, the idea being that if the module failed, she could simply remove it and plug the harness back together. Ensure your finished cable and module are routed UNDER the frame rail and not OVER TOP of it. 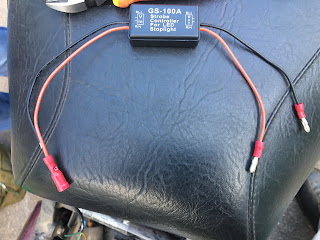 6. I encourage you to "do a tug test" on each of your connections. You would rather see a poor connection fail in the driveway as opposed to one the highway one dark and stormy night. 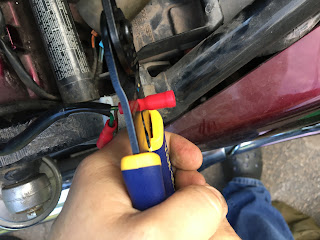 7. Prevent water ingress by using electrical tape over the end of the manufactured insulation. Wrap this as tightly as you can manage. 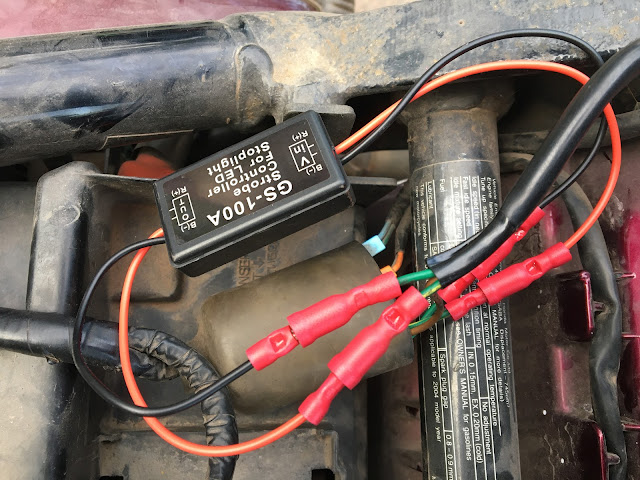 Note that we disconnected the strobe and rerouted the cable after our testing, then tested again once it was secured to the frame rails out of the way of contact with the seat. 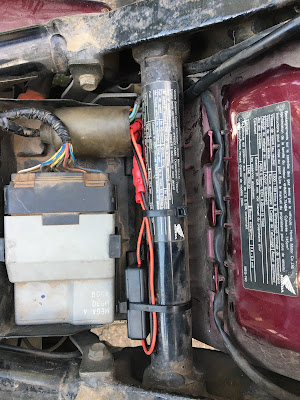 And now, for your enjoyment, a video showing the completed job. Caroline replaced her analogue 1157 bulb with an LED one that she purchased on Amazon.ca, so her bulb appears quite bright in this video. Your mileage may vary.

The GS-100A will apparently work with both analogue AND LED bulbs, but the pattern changes a touch as the  analogue bulbs can't respond to the quick flash voltage spikes the same way.

This video by Gary Rowe highlights the differences you might expect to see:

Caroline has been riding with the brake flasher for almost a week now, although has only gone out on a few rides. Some observations of mine:
What have you done to make your ride safer this season?
Posted by Rotten Ronnie on July 04, 2020
Email ThisBlogThis!Share to TwitterShare to FacebookShare to Pinterest
Labels: 2004 Honda Shadow 750, Brake Flasher, brakes, Farkle, GS-100A, Maintenance, Strobe Controller for LED Stoplight