The weather hasn't been fantastic here on the Island this spring, and we were lucky to get a day this long weekend with a bit of sun in the forecast, so when I laid my head down on my pillow on Saturday night, I was ready to roll out of bed Sunday morning with plenty of time for breakfast, then an early morning start on our unplanned trip to head somewhere (on island) for much of the day.

CLine had other plans, such as "Sunday morning sleep in!?" but we compromised and found ourselves geared up and waiting in line at Tim Hortons in Cornwall for a morning start of a coffee and breakfast of sorts to start us on our day. This was about 10am, and because we got out a bit later, the day was warmer than if we had left earlier. This proved to be a good thing, as it was brisk enough on the bikes for me to be wearing a medium thermal layer under my riding jeans, as well as my heated jacket (not plugged in). CLine opted to remove her heated vest, but was happy that she had on a long sleeve base layer under her jacket.

Breakfast done, now to "Get out of Dodge". All roads seem to end up taking you to Charlottetown or into Summerside, and our ride wouldn't really start until we were on the West side of Summerside in a town called Miscouche where we would leave the Trans Canada 1 and strike north on Lady Slipper Drive North aka 12 and head out to the North coast and follow it along right up to North Cape.


Seven and a half hours to cover four hundred and twenty six kilometres... Granted, a lot of that time was used up by stuffing our faces with breakfast, lunch and an Dairy Bar stop... Totally worth it! :)

We got to ride up along the coastline of Malpeque Bay, or at least the Ellis River/Grand River portion of it. (Can someone please explain to me why none of the blue water in Google Maps and OpenStreet Maps is named? I'm sourcing Hydrographic charts to name some of the rivers we crossed. )


We had just turned the corner on 12 when CLine told me that "I saw you looking, so if you want to stop and take pictures, I'll wait for you up ahead.", no sooner did she let that slip, and I managed a U-turn to head back to get the picture below. :D 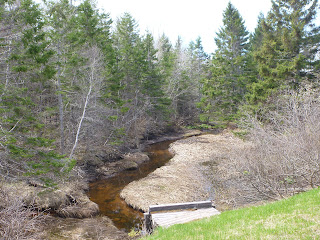 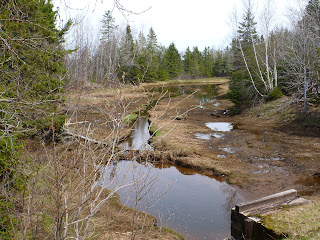 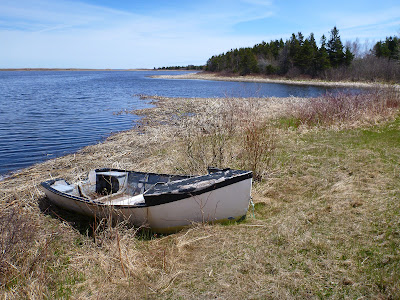 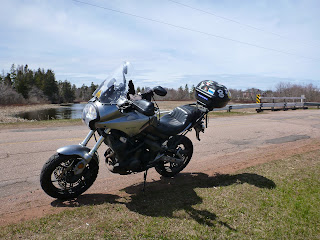 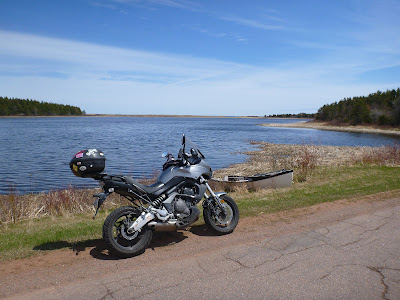 It was around noon when we rode into Alberton, and the signs for the Alberton Bakery & Cafe had me wondering just how good their sandwiches were. CLine and I sat down and ate an egg salad on white and a turkey sandwich on whole wheat, with a scoop of wonderful mashed potatoes shared between the pair of us. That and a cup of hot coffee, and we were set for lunch. That should hold us for the rest of the afternoon, so it was time to throw a leg back over the bike and get to it once more.


North Cape at last! There were a few more visitors than I was expecting, but far short of the summer crowd that will visit here later on this year. 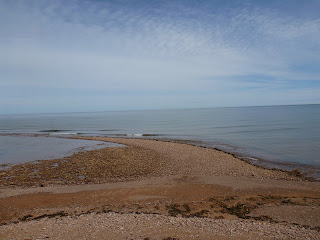 "Are those seals out there? "
"Where?"
"Those black dots out to your right."
"Birds I think."
"Why do they call it 'Sea Cow Pond' if there aren't any sea cows out here?" 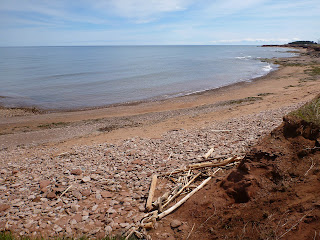 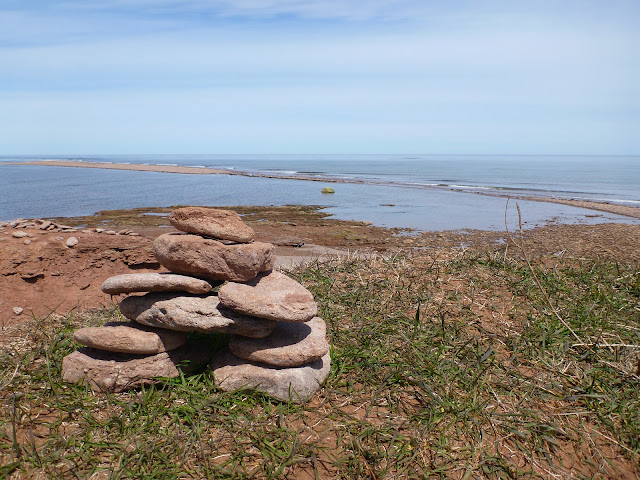 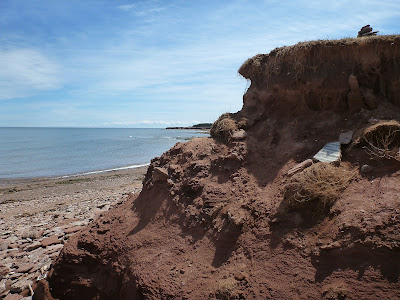 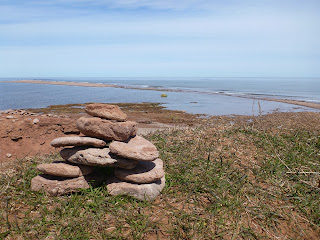 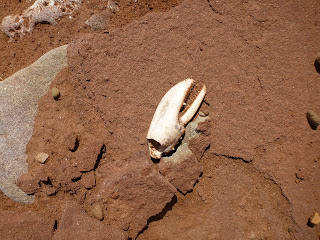 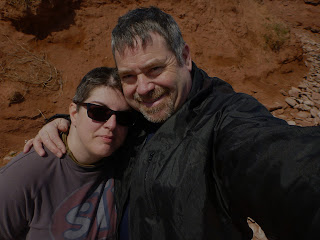 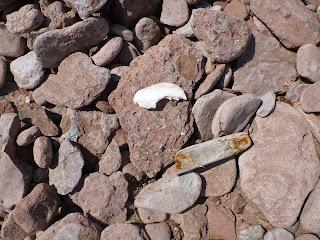 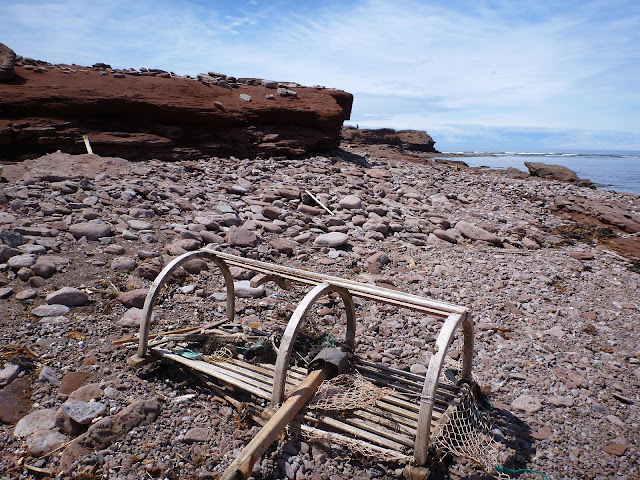 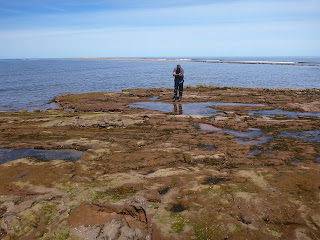 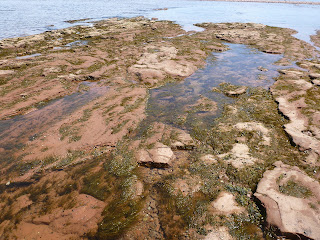 I stop to take pictures, and CLine takes advantage of it to adjust her gear. That's fair. 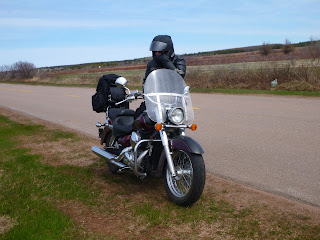 Another U-Turn to drag CLine back here so she can claim her very own road.


The lengths to which I will go to for the perfect shot... Sadly, those shots didn't make the cut. 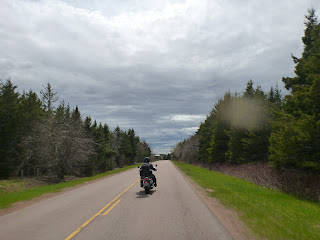 I made a wee mistake here. We headed south on 14 which takes you south-west to West Cape PE, then you swing back in to the East as you reach West Point PE. I took us off of 14 and onto Beaton Road that would take us trough the wee hamlet of Brae, on on through Alaska PE, and from there back out onto the Trans Canada 2 and back towards Summerside... Completely forgetting that the road on the other side of Alaska was a few kilometres of clay road, and it had been raining much of last week. Of course there was mud on that road, but CLine didn't hesitate and kept right on trucking, trying to pick the dry line along the road. 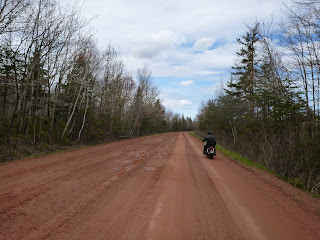 Afterwards, as I was apologizing for taking her down that bit, she said "I wasn't worried about it, so it wasn't that bad or I'm too stupid to know any better." Did I mention that she is a keeper? She was more worried about running out of fuel when she hit 215 km on her tank, and hadn't even had to flip it over to reserve. 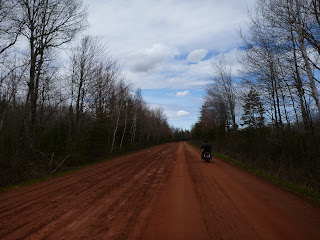 I'll be the first to admit, when I followed her into that rut up ahead and the front decided to slide right instead of track straight, I got a bit nervous and put away the camera.

CLine had this to say... "Yeah, I hit that too. I figured throttle would get me through it or make it a whole lot worse..."  Can you see why I love this girl? It's almost as if she listens to me once in a while.

She was at 250 km when we hit Richmond for the pit stop, and not even on reserve, so I figure she could have gone at least another 20 or so on reserve. One day I'll bring some extra fuel and see how far she can go til bone dry.


We opted to head out of Summerside on Blue Shank Road, then bypassed most of 1A over to Kinkora where we stopped at the Somerset Ice Cream Bar for a couple of cones. CLine couldn't make up her mind, and when I offered her a taste of my strawberry soft serve, she tried to trade me for her twist. No deal! 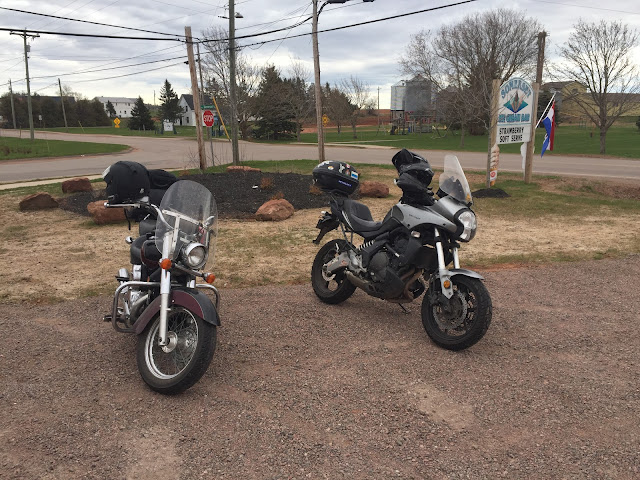 Hey! I just want you to know that if you do ride on the island, that roundabouts can be dangerous as tourists and Sunday drivers use them too. Watch out for lane drift and try to minimize the risk when you enter them with other vehicles.

We had a wonderful day in spite of the cool temperatures, and are already planning our next adventure, but that one is going to be off island, I think.

Cheers from the Island!