The Kickstand fix! or "the Versys gets a big shoe for a little foot"

I've been riding for a while now, and had been pretty content to use whatever came to hand to place under the kickstand to prevent my motorcycle from sinking into the dirt. I've used plastic water bottles, soda cans, rocks, electrical cover plates and plastic kickstand pucks. But when you arrive on the spot and even have a kickstand puck in your tank bag, there is still quite a balancing act to drop it and get the kickstand over top of it. Now add in the weight of a bike fully loaded for touring, and a ten or twelve hour day of riding, and I can tell you that sometimes I nearly fell or dropped the bike while getting that support under the stand. And what about those quick roadside stops where all you want to do is get off for a minute or two?

At Rocky Point Newfoundland, while on my heavily loaded KLR, I got off the bike to take a few shots...

Only to return and interrupt it's dirt nap.

The Versys had an even smaller footprint than my old KLR, and was heavier to boot!

Problem solved the cheap way... A kickstand plate from eBay.ca 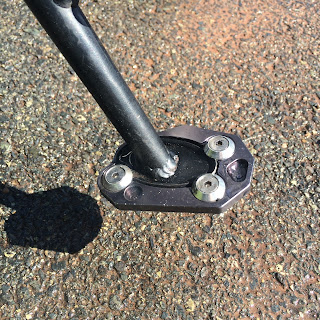 A search with keywords such as "kawasaki versys 650 kickstand plate" brought a whole list of decent kickstand plates,  that were certainly a whole lot cheaper than those that I'd seen on other online websites, especially when you view the selection available with free shipping.


I went with gun metal grey to match the worn kickstand of the Versys, but i find it is a bit soft, so if I bought one again, I'd try to get a natural aluminum colour so you won't get butt hurt when the lovely colours get abraded off of the bottom of the plate by the asphalt.

I knew that it wouldn' be SW-Motech or Touratech but I'm on a budget and was able to find a few styles coming in at under $12 with free shipping!

Touratech wants $69 USD before shipping for this model!

I placed an order for the eBay special and sat down to wait out the month or more it took to arrive from China.

It was made from a piece of aluminum with stainless steel fasteners and looked like it had just come off the CNC machine. supplied with a hex key all I had to do was use some thread lock (I'm an Ex-KLR rider remember) and it was on the bike in under ten minutes.

Pros: Price and performance is brilliant.

Cons: 5% of the time when parking on very loose soil I still needed a kickstand puck, but that was due in part to a heavily loaded touring bike on boggy earth. The Touratech model is larger and probably would have worked in all fairness, but I saved about five tanks of gas plus! :)

Parked on that 5% patch where I still needed that kickstand plate, at Shubenacadie NS.

On a recent trip to Nova Scotia's Lighthouse Route I stopped on Crescent Beach to take the shots above, and instead of balancing and dropping a kickstand puck then post photos, trying not to dump the bike as I collect, all I had to do was lower the stand and exercise a bit of caution on the dismount. Absolutely brilliant!

Once again, I used blue loctite on the threads so I wouldn't bemoan the loss of the adapter, but it has worked well in cow pastures, sandy beaches, and hot asphalt.

All this for only twelve dollars...

I power washed the bike and kickstand today, and noticed that as the puck is made out of aluminum, that it was slowly grinding away the bottom. I figure in a few years I might have to buy another one. lol.

Money well spent, and I'm starting to forget what it was like back when I had to use the kickstand puck all the time. lol.

I had to replace the kickstand (don't ask) and the first impression of the new kickstand that I mounted was "What a silly little foot!!!" and I'm stuck waiting for my Chinese part from AliExpress to arrive.
I wanted a bit more grip than the "washers" of the last model I was using, but that takes big money, and I'm now into this farkle for $14.63!!!