We had planned to do three days of motorcycle fun, but when those plans fell through and we found we had a shot at a single day of riding the motorcycles, we took that toy firmly in our teeth and ran with it... We had a dogsitter!!!


Can anyone afford a $30 breakfast? Not us, so I had a couple of fried eggs and a cuppa before heading out to the garage to gear up, but I made sure to fill a 750ml water bottle for the trip, and Caroline beat me to the punch as she already had her hydration pack strapped to the motorcycle, with a spare reused gatorade bottle stuffed into her tank panniers. It was going to be 31C today, and Caroline also stuffed some sunscreen into her panniers.
We hit the road before ten and headed for the bridge quickest route, and rolled on through the ticket booths "We are paying for two, he will go first!" said Caroline to the lady in the booth. As you may have guessed this was not our first kick at this can.

While riding out towards Joggins,we felt a cool breeze, and saw some light fog out over the bay... That resulted in a cooling breeze that was almost chilly as we rode along the coastline on Shulie road. Man did this feel nice after sitting in that hot sun this morning. 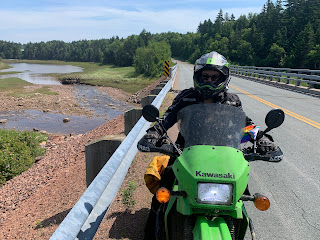 That photo of the newly paved bit tempts you, doesn't it? Well sadly, further towards Apple River it's in sad shape indeed, and you need to stay at or below the speed limit and look for the odd pot hole that you might not be able to claw you way up from should you drop into it. Reducing your speed and being wary is the way to ride the broken bits. Cruisers do it with ease, as does the KLR and Versys that Caroline are riding, but the sportier bikes would not appreciate this road with their stiff suspensions. 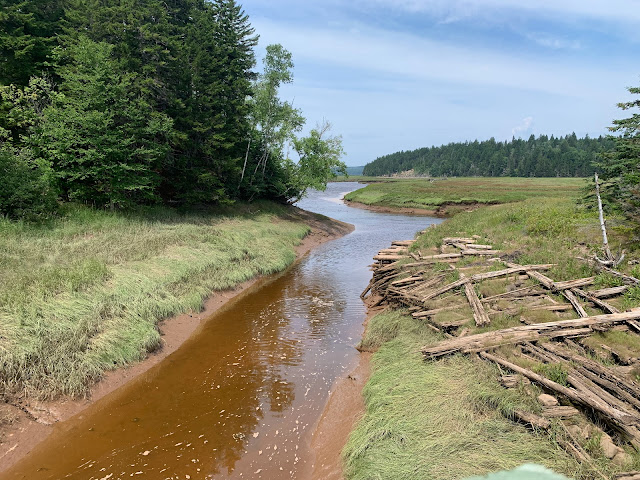 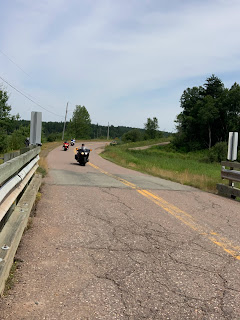 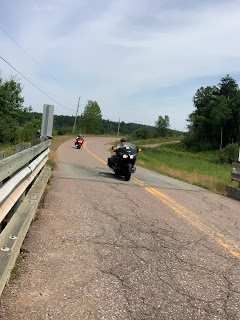 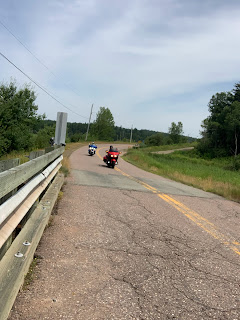 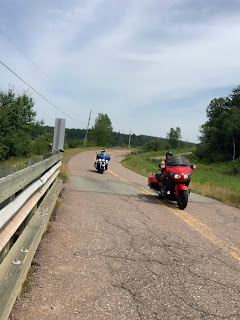 Smiles everyone smiles!
I couldn't decide which one I preferred so I chose them both. 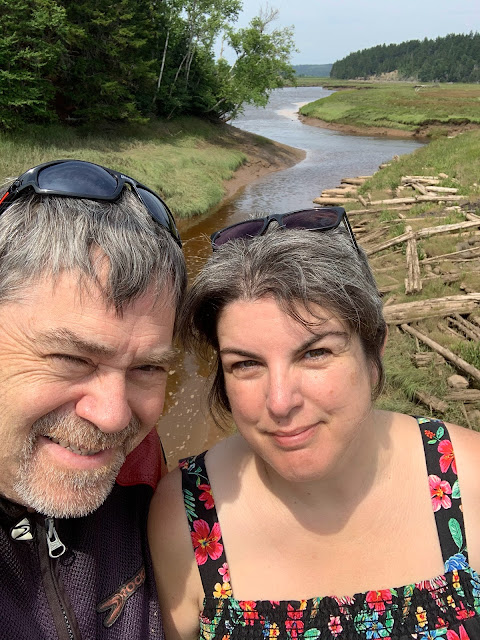 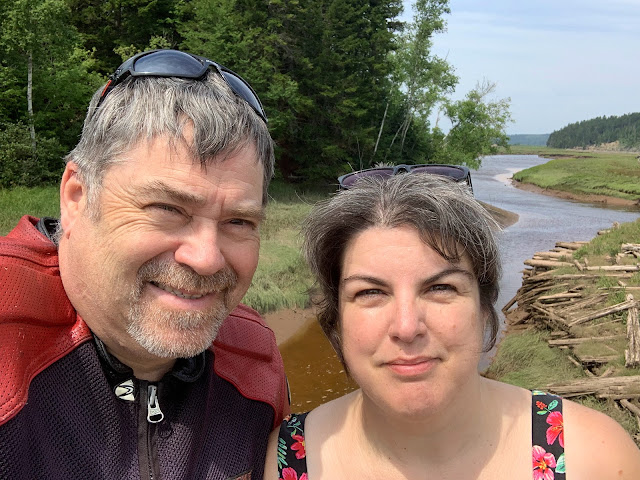 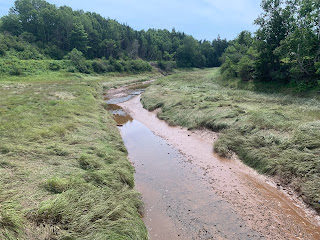 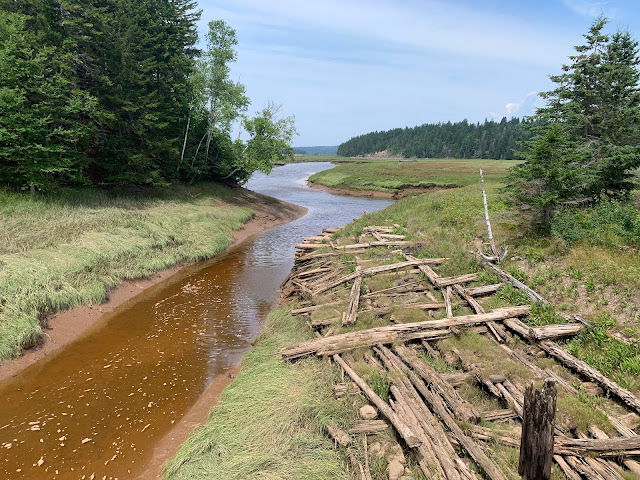 Advocate Harbour is a place we've been to and through every year since we met in 2018. It was our first off island ride as boyfriend and girlfriend, so we opted to keep this ride short and sweet. Caroline patiently waits for me to get these shots, and it was tough in todays heat!
Chignecto Bay is subject to some of the highest and lowest tides in the world, such a huge difference that they tried installing some tidal powered generating stations along the coast here a number of years ago. 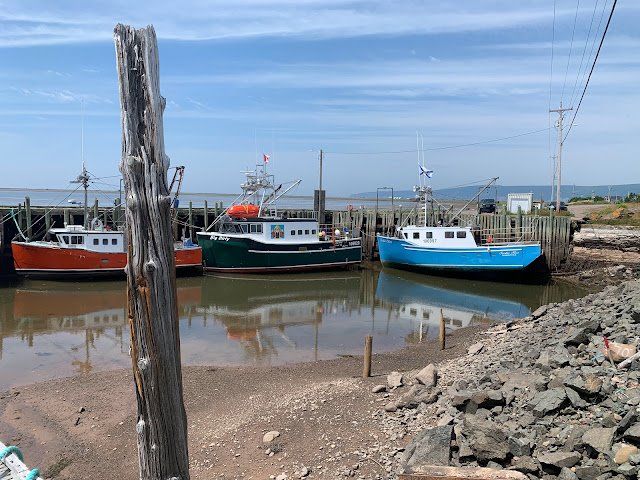 That boat is resting on the bottom while awaiting the next high tide. 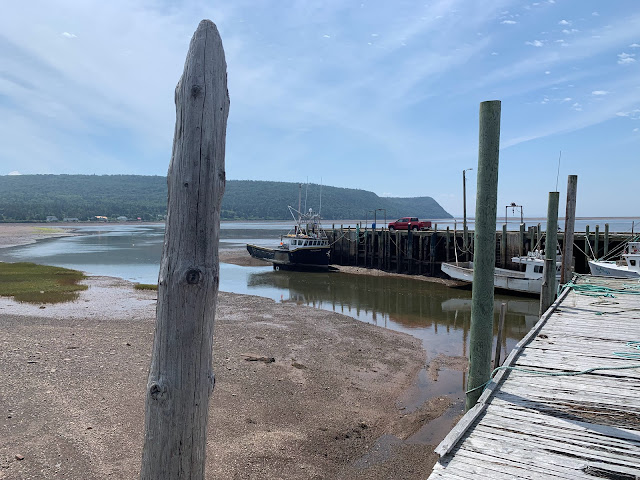 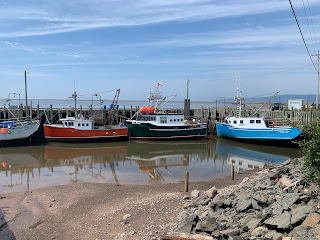 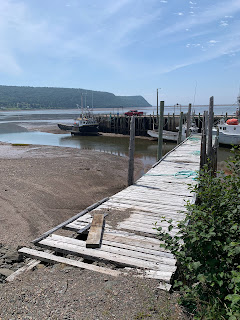 Cape D'Or forms the back drop for this lovely little harbour. 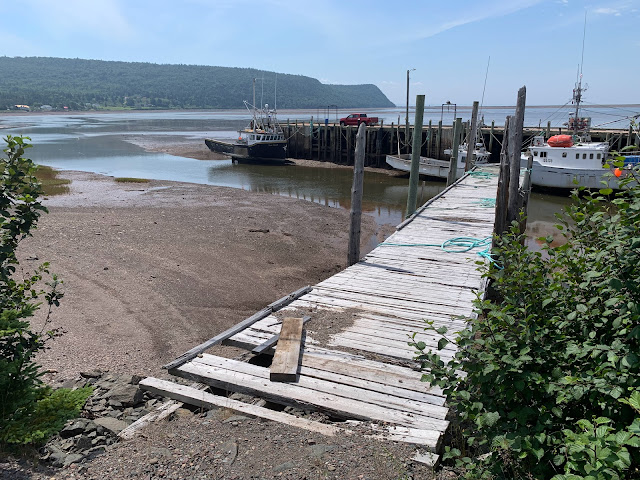 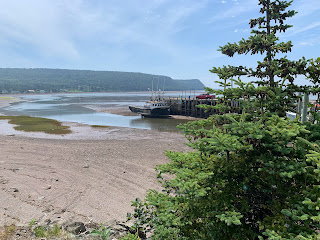 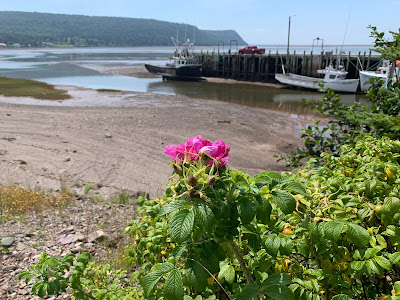 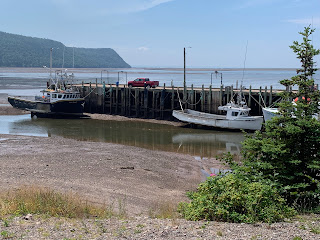 The south side of Cape Chignecto is the run from Advocate Harbour to Parrsboro, and it's a blast, although the road is rougher in some spots than it has been in the past. I'd ride this with a bit more care and attention in spots.
We had a few plans for lunch in Amherst NS, but none of the them panned out so we hit up Frank & Gino's for a burger and a donair sandwich, and paid a bit extra for a greek salad to go with them. The food and service was great, but shelling out $60 dollars for it after taxes hurts...

That after lunch ride from Amherst to PEI and home was the hottest ride of the day. We stopped at Ceretti's in Borden-Carleton for a popsicle and a breather, where we also bought a couple of things for supper, a Porc Tourtiere Hand Pie for me, and a Taco one for Caroline as well as a wee bit of junk food.

Even with a sitter the dogs were over the moon that we were back, and available to play fetch with them in this stupid hot weather.


So at the end of the day we spent roughly $155 iirc.
It was a more expensive outing than I had first thought, but we can't let inflation kill our fun, now can we? Apparently Costco sells SPAM by the case as reported to us by Jeremy L. and I have this plan for Ramen and SPAM... ;)