Father's day, but I'm not a father and my Dad is 1700km back west in Onterrible, so I made plans with Caroline to head out to our favourite Island restaurant, The Home Plate in Murray River PE to visit our friend Caroline F. and enjoy a wonderful lunch of the best fish and chips on the Island.

Spam, part of this incomplete breakfast. I actually had a lovely cuppa and fried egg 'n cheese with this, but Caroline was pleased to come down to a coffee and these four bits I'd saved for her. Her Aunt Sharon loathes the stuff, and Caroline grinned as she encouraged me to post this on Facebook and tag both Aunt Sharon and her mother, Esther in the pic. 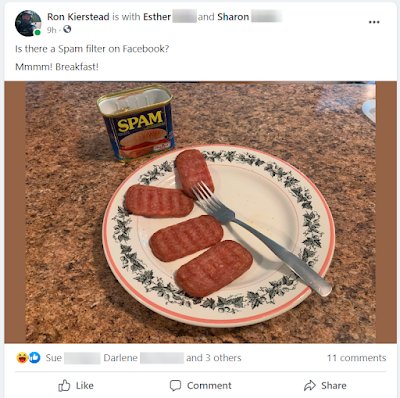 I did the breakfast wash up while Caroline exercised the dogs, and she had her gear half on when she popped Hunter and Tazo into their crates. It took me a bit longer to get ready, and Caroline whipped out her phone to get proof that for once she'd beat me in the race to get ready, but her timing was off and I was away while she still had her glove off taking pictures of the awesomeness that is me. 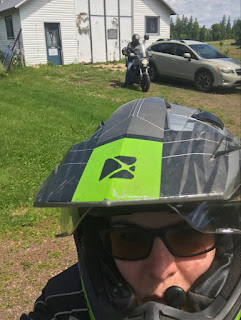 We took the detour through Stratford and along the Keppoch road that would bypass a straight road that takes two lanes into the roundabout, then surprises people when the lane ends on the right. Someone always trys to merge over at well below the posted limit. I despair of it and ride like a madman through that bit, thinking that if someone is going to try to knock me off my bike, it is going to be me. I want drivers to stand over top of me and instead of say "I didn't see him when I tried to merge into the lane.", rather "He was going so fast, it had to happen at some point. I guess his luck just ran out." That way I'd make the papers in a cautionary tale to other motorcyclists to be extra cautious in the the roundabout. Wait, we know all that, it's the other motorists that concern me. Do THEY know they need to be extra cautious? I doubt it, so we opted to cut through Stratford on the less travelled road and leave all the mid town madness to others. I love roundabouts, but on my own terms.
It was cool when we started out, but at Pownal I wanted to check a message on my cell and clean my visor, and Caroline shed her rain jacket liner as she was beginning to perspire (I sweat, but she is oh so lady like on her toxic green KLR with the well loved creamsicle coloured side bags.). Back on the TransCanada...
We turned in at Orwell Corners, but then headed across on 23 to Newtown Cross and took 211 north until we headed East on 24 again, that would take us  through the Caledonia roundabout and on into town, to the restaurant. Caroline pulled in, while I had a wee Marketplace item to pick up over on Floating Bridge road while her plan was to strip off her riding gear and grab us a table.
I'd seen a "mandolin" vegetable slicer that my mom had used years and years ago. This lady had posted a used one for ten dollars, and I was so pleased to find it, that I paid her fifteen and asked her to hold it for me until Sunday when Caroline and I could drop in to collect it. I love these things! Somehow between 2007 and 2022 I'd lost mine in a move or divorce or a combination of the two, and I was super chuffed to be able to slice away potatoes and onion for a "Bev Kierstead" scalloped potato casserole. 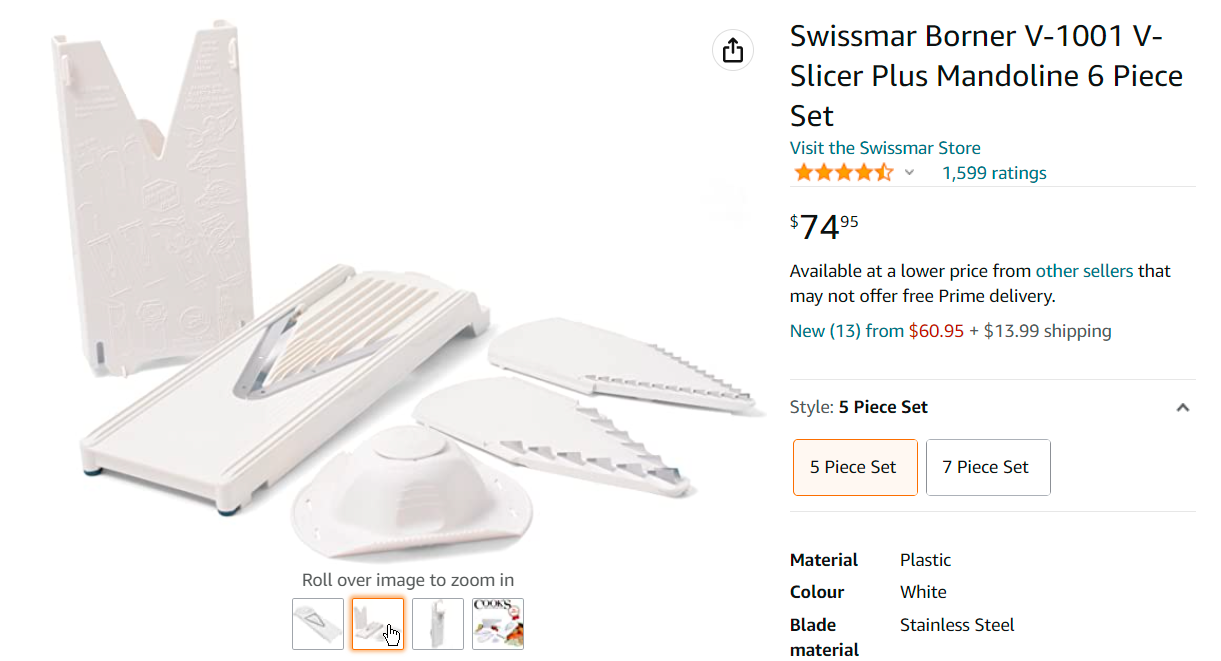 Hahaha. Anyhow, with that in the top box I turned round and negotiated their half mile long apple orchard clay driveway and shot back up the road to pull in beside Caroline's KLR and head inside to see her evil twin Caroline F. :) 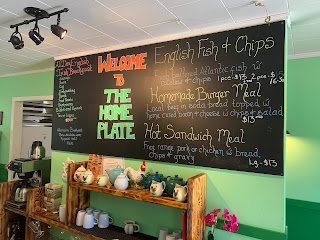 We had a lovely reunion with Caroline F., and despite the lovely specials on the day, we opted for fish n' chips, but had to be different, and she had a cup of coffee, and I a pot of tea. (The tea mug came over nice and warm). The Home Plate serves a fantastic pot of tea. Just to be different I ordered two pieces of Hake, and Caroline ordered two pieces of Haddock.
Caroline dashed off to crack the whip over the head of her kitchen slave, then returned to take her ease and get caught up us as the bikes had not been in her parking lot since sometime last season. Oh! But we'd been away for so long, and felt like little kids with our hands caught in the cookie jar trying to explain away about the dogs and how it was an ever changing dynamic, blah blah blah. And when she had gone back into the kitchen again, we asked ourselves soto voice why had we ever been away so long. lol.
When the plates rolled out of the kitchen and were placed in front of us, I snapped a picture of mine. So much better "in the batter" then I had remembered, and that smell of vegetable shortening and chips, the battered fish, homemade tartar sauce, and red wine vinaigrette on the vegetable salad. Or was it pickled cabbage with the sweet peppers? I savored each bite before starting on the lovely creamy coleslaw.

I hadn't even touched the fish yet! It almost fell apart, held on the fork by the batter and gravity. Lovely. Simply the best fish and chips on the island.
One day I am going to try her hamburger, I promised myself I would, but it was not going to be today, and the next visit I am probably going to reacquaint myself with the Irish Breakfast.
Caroline made certain I swapped pieces of fish at the halfway point with her, and I tucked into a piece of haddock to find that if I hadn't been told which was which, you could have served me either and I'd be none the wiser. The flesh of the haddock seemed a touch firmer and dryer, and a bit stronger tasting. The fresh cut fries were mixed with strips of potato, the real chips of the show, and with some malt and salt, they were absolutely lovely. We had to pack our left overs into a takeaway box, as we wanted some room for dessert.
It was time for a grand tour of the dessert cabinet, but that might have been a mistake, for she had five fruit based tarts and cakes, a salted caramel tart that Caroline (my Caroline) claims was a show stopper, but for me, I was lost as soon as I was shown the strawberry jam shortcake. It was like a Peanuts cartoon when the adults are speaking. "Wha wah wha, wa whan wah?" Slowly it penetrated my fevered brain that I was going to have to choose between Strawberry, Raspberry, Lemon, Apricot and Pina Colada! An impossible decision that I chose not to make and asked for the shortcake and two bakewell tarts. Caroline stepped up and ordered the apricot tart, and a caramel tart. We'd been warned that some of these incorporated a lovely butter cream icing, and I thought I knew what that meant, but all these years those Wilton's cake decorators have been deceiving me! Butter cream is brilliant, smooth, and not sharply sweet at all. In my opinion it more closely resembles a cream cheese icing for texture and sweetness. It defies description, so I'll say that I quite enjoyed it in the Apricot and the Shortcake.

The Apricot "jam" in the tart was more of a compote really, with such bold apricot flavour, and not nearly as sweet as the North American apricot jams that I know and love. Caroline shared a couple of bites of hers, and I enjoyed it immensely. Here is a photo the shows both my restraint and how delicious the shortcake was... Was. It is gone. Every bit of it. 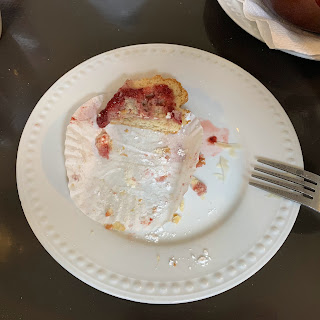 Caroline F. drew our attention to a poster on the wall, the Fish Alley Music Festival. My Caroline was quick to draw attention to the J.P. Cormier who appears to be a headliner, as "That guy who sings the wrong version of Kelly's Mountain."  Back in 2021 I made a blog post that made a big deal of Caroline climbing Kelly's mountain in Bra D'Or Cape Breton, but according to her mother and Caroline herself I'd chosen the wrong song and artist. J.P. Cormier did this version, and I fell in love with the tune. Caroline and her mother Esther were quick to tell me that I'd chosen the wrong song. It should have been Kelly's Mountain performed by the McGinty's
But I put it to you, a tragic tale of love won and lost? Or moonshine and evading the King's tax? :P 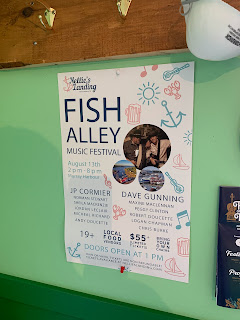 We really couldn't make up our minds, and we left with a "to go" box of treats for tonights supper. Two lemon bakewells, a raspberry one, and a pina coloda cake?

Well, we sure had fun on the way back to the main road, kept on our toes by the odd wash out on the dirt road we chose, that would put us back onto 24. 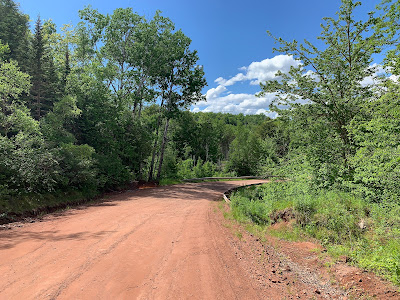 Then we wanted to head through Victoria and follow the coast until Lower Tryon. Just beautiful! 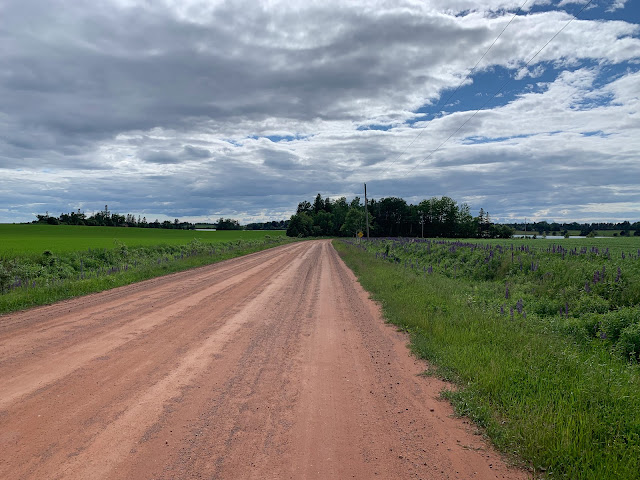 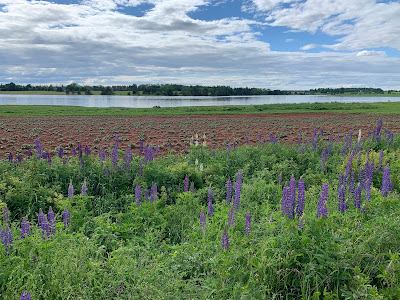 Perhaps we should have stuck to the highway for the ride home... The dogs were happy to see us, and even happier to chase their balls.
Caroline made us a lovely cuppa tea, and we are going to get stuck into our dessert now.