2020 Wanna Try and Make it to Souris Again Today?

Sure... But I need some more time to finish these sandwiches and get dressed. The text messages were flying fast and furious, what with the ride starting soon and all. Saturday we'd been so lazy getting out the door, that we didn't really hit the road until after two, as Caroline took me up on my offer to ride my Versys in the event parking lot just down the street from my apartment, but today we were just using it as a meeting point to tie up some loose ends and gear.

All too soon it was time to roll, and we were off and rolling Eastward, with the idea of hitting East Point and looping back by the North Shore. Grandiose plans for what was now two thirty in the afternoon on a bright but chill Spring afternoon, but faint heart never, umm, If you never swing the bat... Nope. I can't think of the right cliche... We were having fun, and on our way at last!


Today we opted to make time and take the Trans Canada across the river and make tracks for Montague, where we would try to pick up the trail that we'd left yesterday when we short turned and came home.

We got up to Pooles Corner just outside of Montague, (which is now a giant circle of a roundabout) where Caroline asked if I wanted to head to Georgetown, and I might have mentioned the Saint George pub in Georgetown Ontario, perhaps a bit eagerly as I fondly recalled their signature dish of Roast Beef served on top of a giant Yorkshire Pudding. Sadly, while quite scenic, Georgetown PE is a bit different from Georgetown ON. Ah, memories...


I stopped to get a couple of pictures, and Caroline pulled over to wait for me, then took the lead again where we had a wee adventure on the streets of Georgetown trying to get our bearings, then headed North East on Grafton Street where it meets up with Burnt Point Road, where we wanted to head North West and hook up with 3.  It was a T intersection, but it was covered from side to side in gravel. The only really clear bit was where the locals were making right turns. Caroline headed into it, warned me over the Scala G4s about it, and I watched helplessly as her rear tire swung out from beneath her, and down she went in a cloud of dust, but thankfully she'd scrubbed off most of her speed before the get off.

This sort of thing never goes unobserved, and a local lady stopped her pick up truck and asked if everyone was okay, and Caroline assured her that she and the bike were fine, but the damage to the ego was  going to be the hardest to recover from. She preemptively posted this on Facebook, so my editor talked me out of the click bait titles for this post.


"She hit a patch of sand on the road and you will never guess what happened next!"
"How do you keep the rubber side up? Three things NOT to do..."

She's a trooper and a keeper. I love this girl. Read on.

We got the bike up where she took charge of it and moved it off to the side of the road while I got mine off the road as well. 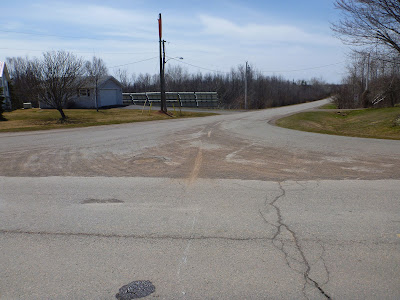 Her highway bars took the worst of it, along with her mirror which had spun and needed to be sorted out. The only real reminder left apart from the bruised and sore elbow, was a huge crack in her windshield.


Jacob: It was the gravel wasn't it? Almost did the same thing last year coming out of work
Caroline:  Yup, it was the gravel/sand/dirt. Well... to be fair, it was my reaction that was the problem. It was just sitting there doing nothing. Hah.


I gotta tell you, if Caroline had not been leading, it might very well have been my bike lying on it's side in that intersection, and it would be even money as to whether I'd get through the intersection and head straight into the ditch on the other side of the road, or laid it down with too much brake or steering application on loose surface. Thanks for taking one for the team, darling.

Anyhow, I offered to end the ride and turn back, but Caroline wouldn't hear of it, as she was on a mission to get a photo tag, the same tag she'd hoped to get yesterday afternoon, it was the photo of a the underside of a bridge and a bike, so we pulled off at the launch just on the other side of the Souris River where the public launch ramp is, got Caroline her tag shot, then settled down to enjoy a nice cuppa tea, then some ham and cheese sandwiches made earlier in the day. 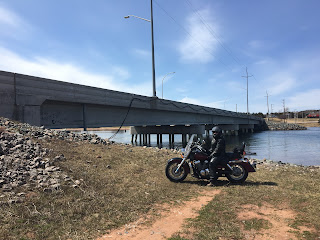 The Red Isle Riders group that we belong to showed that someone had gotten the tag already, ( I got corrected by Caroline, as it was NOT a Red Isle Riders post, but in another group she belongs to) but the new tag shot was a picture on a public beach, so after our lunch  we headed across the road and took a picture of her bike at Souris Provincial Beach, although with all the wood boardwalk, there isn't much beach to be seen from the parking lot at the moment.

Neither of us were enjoying the cool weather as it was clouding over, in spite of our heated jackets and grips, the cold was beating us down, so instead of heading further North along the coast, and up and around to St. Peters, Caroline suggested we head back down to Rollo Bay then turn East and ride a side cut out to Bay Fortune along the coast, where she felt sure she could score a new tag photo for the game, and hadn't seen that stretch of coastline in a dogs age. I was pretty sure I'd "been down that road before" but not recently enough to remember it, so this was another occasion when having poor short term memory can be a good thing.

Just off of 310 there is a fishing wharf out at the end of South Road, where Caroline wanted a tag picture of herself and not one, but TWO boats out of the water. Mission accomplished with perhaps a bit of overkill.


Okay, mission accomplished, she had her tag shot, and she pulled over to the side of the road to quickly upload it to the group so she wouldn't get tag scooped as had happened yesterday afternoon.
Point to Caroline. (I got an assist) 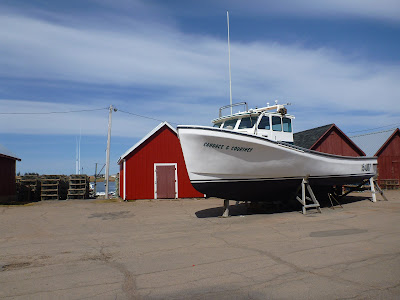 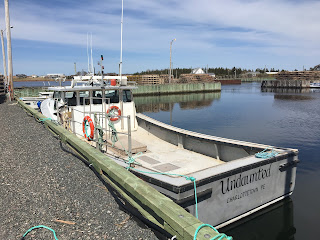 And that was Bay Fortune. I quite enjoyed the 310, although both of us were now on high alert for dirty corners, and I could see that Caroline was still a bit shaken up, as she was holding back, and rightfully so, as it I'd really rather not ask her to help pick my bike up off of me today, so slowing down a bit made perfect sense.

There was one more bit of 310 that caught my eye, and it reminded me of  my rip across Northern Quebec and Labrador, en route to Newfoundland across the Trans Labrador highway, and that is stunted pine trees in a tundra like vista. I see it quite a bit out East, but usually on a very small scale, and it always catches my eye when I do. I made a point of going back for this one, but am rather disappointed how the camera seemed to catch all the foreground, but almost nothing of the background of trees short and squat in a carpet unto the horizon. 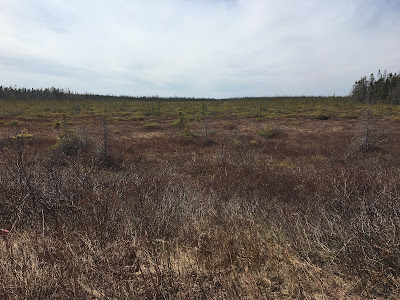 I totally retouched that photo. Cropped in to eliminate the foreground, then increased the colour saturation so the vivid contrast of coniferous green pine would show against the browns and reds of withered and dry foliage of last year. Just for giggles, I'll show you a picture from the Trans Lab for comparison:


Thankfully there weren't nearly as many black flies out on the Island as compared to Labrador, sort of none right at the moment, which suits me just fine, thank you, and I didn't resort to leaving Caroline for black fly bait while I skedaddled with my skin still covering my bones.

Caroline was pretty sure she was going to have a sore elbow for a couple of days following that ride, and we split apart as we crossed the Hillsborough River bridge as we entered Charlottetown proper, I to my bat cave (poorly lit underground parking at my apartment building) and she to her respite in the sun further down the road aways...

Tune in next time to hear how she sourced and replaced her windshield without my help. ;)

This coming weekend is looking nasty, but thankfully we didn't get the snow that Halifax and Saint John got today, just some wee flurries that are pretty much already gone and done that state change thing, solid to a liquid. Snow to rain.

P.S. Oh, remind me to do that darned oil change and sort out why my headlight decided to suddenly stop working.