I've been watching the BikerBits YouTube channel, and found some great advice in his "Shit Easy Motorcycle Camp Cooking" videos, and decided that I needed to add a gas stove to my collection, but wanted to do it as inexpensively as possible. I did a bit of research on advrider.com specifically in the stove thread, reading every single post there, and at long length finally decided on the approach I was going to take with this.

BikerBit's Mark Victor uses a butane cylinder with an adaptor and a "China Stove" somewhat similar to an MSR Pocket Rocket to cook his meals, and his system works quite well from boiling water for a cuppa, right down to simmering for cooking scrambled eggs or pancakes. I was impressed, and decided I would base my new setup on his, but with some changes.

I ordered my stove off of eBay.ca, and purchased the "Dpower Ultralight Folding Backpacking Camping Stove Gas-powered Stove with Piezoelectric" for about $13.95 CDN

I also added a "Gas Adapter for Connecting Long Butane Canister to Hiking/Camping Stove" to my shopping cart, and after a visit to the local Canadian Tire outlet in Charlottetown for a $9.99 CDN three pack of butane cylinders, I was armed with everything I needed to use this stove when I got it, which was this afternoon.
Of course I had to take this out onto the porch and fire it up... 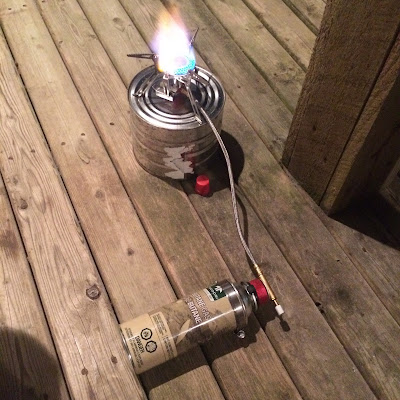 I'm impressed! For a about $23 dollars I'm just about set, all I would need to add to this is a windscreen which I have in my regular "kitchen" set that costs about $5 CDN on ebay.ca

I was a bit disappointed in that the thin metal bracket that holds the piezoelectric igniter in place was bent, but I was able to set that right quickly with a pair of pliers, and it was very easy to disassemble the burner into it's component parts to right the problem.

I found that running on the butane mix, it worked very well at full throttle, and I was also able to taper the fuel off for a lovely simmer that should be perfect for pancakes or scrambled eggs as opposed to full on for simply boiling water.

When I wondered why my stove flared up once in a while during testing, I did a Google search for "100% butane stove flare" and found this article on the subject: Butane Adapter Warning!

These cylinders are meant to be used in only two orientations...

So I modified my setup by adding two pipe clamps joined together to create legs that would keep the cylinder oriented with the cylinder "notch" kept to the vertical as described in the blog. (See the new adapter I found on AliExpress.com that I'll be using in 2020)

I also made a wee 50 second video showing what happens when liquid butane enters the stove by improper position of the butane cylinder.

Please note that there are other gas adapters which include so.me form of feet or stabilization for the cylinder which orient the notch in the vertical plane, as seen below.


I bought a newer adapter at the end of the 2019 season, and haven't tested it yet, but it looks ideal for this situation: 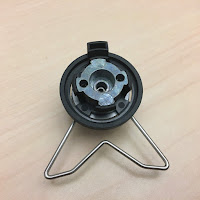 The legs will hold the cylinder in the upright position when the canister is laid down horizontally as I intend to use it. This is the "locked" position for the adapter. Below the Lindal Valve side is showing. Now that I've two of these D-Power stoves, Caroline will be able to carry one set, and I'll carry the other for three season camping. They work very well for power failures as well. 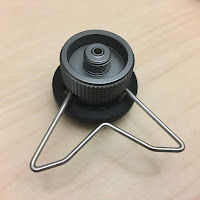 I used the stove and adapter for the first time this past thanksgiving weekend at my campsite in Ship Harbour Nova Scotia, and found that the initial pressure of the butane cylinder had gone from a roar down to an easily controlled burn that made it a simple matter to set up and boil water for tea. I didn't time it, but it is easily as good as the SVEA at boiling up about 800ml of water, but a decent wraparound windscreen is a must to get good burn times in moderately windy conditions.

Once again, cylinder position is important, and on the sloping ground I was careful to orient the cylinder top uphill and in the vertical.

The next morning at a temperature of about 16 degrees Celsius, the butane again performed well and I simply boiled up water for tea and oatmeal, then again some for washup. The ease of use alone with the piezoelectric igniter and a simple turn of the valve makes this setup extremely useful, although I miss my old SVEA, and I would prefer some wider bottomed pots where the small burner size of the SVEA leant it to smaller pot sizes.

Here is a great article on Canister stoves especially the cold weather use:
https://backpackinglight.com/canister_stove_faq/

I've been bench testing this stove at home, and the volume of gas isn't as much as when I first tried it last fall. In fact, I'd call it a middlin' flame, and while stronger than a spirit burner, it's now a suspect stove and I set it aside for my next trip in favour of a canister top stove similar to the MSR Pocket Rocket, although at less than one fifth the price.

I'm pretty sure it's caused by a blockage in the hose, so will try disassembly to see if I can't put it to rights. (Fixed it, see below)

I gave up and left it at home in favour of another cheap china stove that performed well.

This one is a combination of an adaptor tripod and a burner unit that has performed well for me over a few trips. 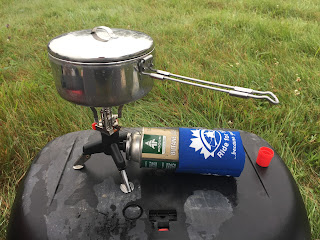 I was bored and playing with my camping gear and decided to have a look at the blockage. The D-Power stove is fairly easy to disassemble and I was quickly able to isolate the issue to the gas supply hose itself. I cleared a blockage by inserting a four inch piece of telephone/network jumper wire into each end, after which I was able to get full flame from the stove once more.

I've also purchased a shorter windscreen for this setup as you can see that the windscreen I was using at first was quite tall, much taller than it needed to be.

Hopefully this one will fix will last for a good long while, as I really like the thought of using these cheaper butane cartridges along with a low centre of gravity burner arrangement, especially as I now camp with my girlfriend, and need a 1.6 litre pot full of water on the boil, whereas I used to be content with half that amount of water in the morning for tea and porridge.