In memory of Rob Harris

I first met Rob Harris (Ed Arris) in the parking garage of a building in downtown Toronto off of Bloor Street. I was doing a telephone installation in the building, and he had his Daytona 675 Triumph parked in the basement, and two motorcycle enthusiasts chatted merrily for a few moments.

A few years later, I was riding across the Trans Labrador Highway with a number of friends, and while on Newfoundland at L'Anse Aux Meadows viking settlement, we bumped into him and his riding partner Jim who were about to do the Trans Lab in the opposite direction, and as Darlene had participated in the Mad Bastard Scooter Rally that he organized, they knew each other quite well and I was formally introduced.


Later on when I moved out to Prince Edward Island from Ontario, Rob invited me to take part in the 2012 CMG Dusk to Dawn Rally, and I got caught up in Rob and Zac's epic one day rally that just got better and better as the day progressed. Rob struck me as basically a big kid on a mission to make his hobby support him. I was a bit envious, as this seemed a wonderful trick to me.

I'd also have to say that I found his reviews in CMG very refreshing, as they didn't pander to the manufacturer, and I found that on the whole, he rendered an unbiased opinion with a humorous and informative manner. I found myself subscribing to his newsletter and reading more of the articles in the magazine, especially the tours and reviews. While he preferred to spend more on meals and accommodations, we really enjoyed the same sort of spirited riding, and I'd often envy the motorcycle jaunts, launches and events that he would attend as a journalist.

We got to chatting more often in one medium or another, and when he found that I was travelling from Ontario to Prince Edward Island he suggested that I stop in Sackville at the CMG downtown office and have a chat. I had to tear myself away, as the conversations would go in many different directions. We'd chat about everything from tea leaves to psychology, and the best bang for the buck in knobbies.

The Rallies? They were just an excuse to share his passion and play ringmaster at his very own brand of circus. And it worked. I was hooked so badly that when I moved back to Ontario, I scheduled a family vacation to visit the island in August so I could attend yet another one. I rode from the Island to Moncton in the pouring rain, and sat outside the diner waiting for him to show up and get the meal started, and I was soaking wet and mostly miserable. He pulled up, and next thing you know, we were smiling, laughing and looking forward to what tomorrow would bring. 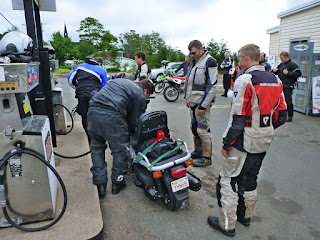 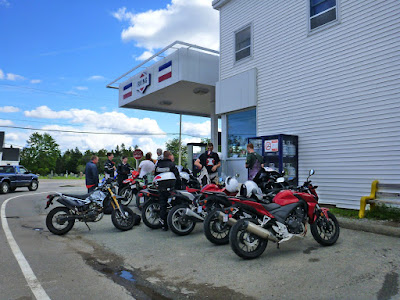 I bought an old 2001 Honda XR400 off of my friend Willie in Ontario, and managed to work a deal with a friend of a friend who knew someone at Honda that was hauling a trailer from Ontario and would be amenable to dropping into Sackville and kicking the bike off the back of the trailer to Rob who had volunteered to store it for me for a few days until I could collect it. Wouldn't you know that was the very weekend of the worst storm in Atlantic Canada in 50 years? The truck couldn't get to within a kilometre of his place as they needed to turn around and only one parking lot was big enough and had been cleared. He collected the bike and told me that he had no troubles storing it a few days longer if we had trouble getting off of the island. A couple of months later, we collected the bike when he also informed me that the front brake caliper was seized, but lucky for him he was able to slide it through the snow and into the his garage. That off hand remark told me that he had worked a lot harder to make this happen for me, and I was really very grateful to him. He'd gone out of his way to help me out, and knew how excited I was to get that old bike.

You can still see the remnants of the eight foot high snowbanks on the lawn.

The Dawn to Dusk rally got passed over in favour of the new Fundy Adventure Rally, and while I missed the first year of it, I attended the second year, and watched ringmaster Rob at the podium smiling, cracking jokes, and turning a riders briefing into a comedic adventure. His wife Courtney was there as well, and it was clear that they formed a team, and he very much valued her contributions to the success of the rally and his business. 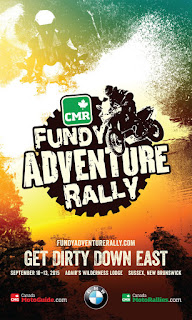 Later on, I was asked to review a helmet for CMG, so Zac and Rob arranged for it to be shipped out to the island to me. It arrived late in June, and while I reviewed it fairly promptly, Rob suggested some edits to the review, and for whatever reason that I don't fully understand myself, I procrastinated. I avoided it like the plague, and I still can't really tell you why. I finally broke down and submitted it in the late fall, far after the season was over, and in my mind, so too the usefulness of the review. and in response to my apology for taking so long with my rewrite, he told me he simply wanted to tie up the loose ends. I was grateful for that, but still feel that I let him down.

I'd visit Rob at his house in Sackville and he'd tell me the best way to get to and from his place, a little stretch of gravel road that lead practically from his doorstep and right back out to the highway, but avoiding the super highway. Just a beautiful little road with a covered bridge that spoke to me, but not so much the Versys, and with all the rough roads that I favoured, I was tossing fasteners or shearing them. I'd lost a front motor mount, sheared one subframe fastener twice, and when I pulled into his driveway he'd ask "How is the Versys treating you?" and I'd relate my current fastener troubles to him. As I pointed to the subframe fastener in question, I was nonplussed to see that I'd lost it yet again! And when showing him the newly replaced front motor mount, I found to my shock and horror that I'd lost the lower motor mount bolt as well! His response was to offer me a lunch that consisted of salad from his garden, any of the fasteners in his collection, and the keys to his Kia Rondo when it was apparent that the massive bolt I needed was not to be found. I returned with a galvanized fence bolt from the hardware store down the road, and used his tools to bolt humpty dumpty back together again. I'm still riding with fence bolt to this day, so I can respond to questions "How is the Versys treating you?" to "I'm sitting on the fence."

I was riding through Sackville with Suzi on board, and when I dropped in to Rob's place, only to find that he was out, I was fortunate enough to meet with his lovely wife Courtney and we became friends, although it might be that Suzi didn't have a Facebook account while I do. All I can say is that Rob has great taste in women, and that I am truly very sorry for her loss, and that of his two daughters who have lost their father today. 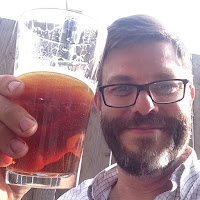 Rob, you made me feel at home here in Atlantic Canada, you shared your home, your food and your passion for riding with me, and I will forever be grateful as I mourn the loss of a fellow rider and friend.

Posted by Rotten Ronnie on May 14, 2016
Email ThisBlogThis!Share to TwitterShare to FacebookShare to Pinterest
Labels: cmgonline, Ed Arris, In Memoria, Rob Harris