Pennsylvania Bound... Or it might have been a wild weekend in Niagara Falls, but thankfully my passenger was adventurous and wanted to see the sights on a two day ride...


Ordinarily I do some research and prep before riding down, but in this case I wanted to cruise some roads that I'd traveled a number of times in the past, namely Route 44 and 872 out of Coudersport PA, while taking in the view from Hyner View State park. After that? Well, We would be leaving on a Sunday, so I figured we would be able to find something in the area without too many troubles.

I've always thought of the ride down the Fort Erie as the worst part of the ride, coupled with some necessary Interstate on the opposite side of the border, until you get onto Route 219 south bound and stop at the Springville NY's Tim Horton's. After that, the ride gets interesting.

Sunday morning border crossings are fairly short, and saw us both across in no time flat. 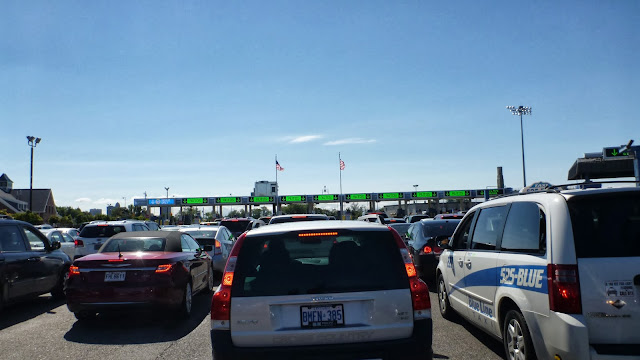 You see Olean NY on the map? It's a place that experience has taught me to avoid. The best way I found was to have a look at Google Maps in Terrain view, and take Route 305 down and avoid the city entirely, mostly due to the large number of traffic lights and slow 30mph speed limit through much of the city. Well, Garmin plotted me right smack dab through the middle of it, and I rebelled and stayed on the highway only to find the detour was more than I could take and would put me out of position, so I doubled back and braved the big city to head further south in Pennsylvania on the Portville road.

Usually what I do is plot a route in Mapsource on my laptop, or on Google Maps then convert it to a track, load it onto my GPS and follow the blue line that will take me on exactly the roads I wanted to travel on. Well, not this time. Garmin do your thing and get me to Moshes Tavern in Coudersport PA in time for lunch.


Okay, when I ride solo, I tend to move around a lot more, so I thought of this trip as one where I could be in Renovo after lunch in the afternoon. Believe me, I've done it in the past, but why wasn't it working for me today? We didn't hit Coudersport until about 1400 in the afternoon. The stops, as I was making more of them because Corinne and I needed to rest our aching butts, and just because I wasn't in a terrible hurry, so the stops went longer than they usually do, so I have to remember that when you have a beautiful passenger, you need to add 1/3 more time to the trip. Right? Okay. On down Route 872 and onto Renovo Road Route 120... 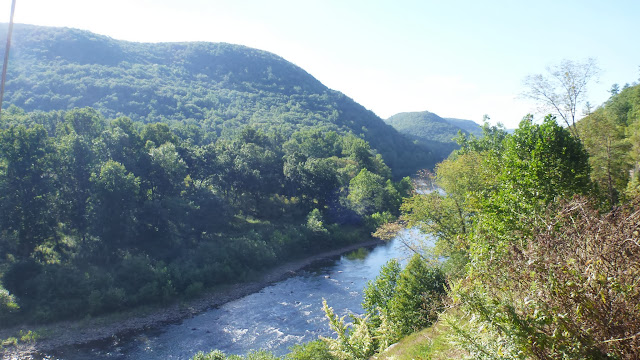 Corinne packed like a trooper, and stuffed all her gear less a rainsuit into her backpack, then I thought to myself, OMG, that backpack won't work with the top case! What if she can't sit on the bike? She unloaded some more stuff from it, and packed almost nothing but some socks, underwear, and some toiletries along with a sweater and some thermal pants to wear under her jeans if necessary. While I was waiting for her, I found that I could strap her backpack on the top of the case, and if she wore my camelbak with 2 litres of water, we were good for the trip. It took a load off her shoulders, and I was glad that it worked out for us both, for it allowed her greater freedom of movement, and a much more pleasant ride, allowing her to concentrate on how painful her monkey butt was.

The road leading up to the lookout on Hyner View is probably the closest thing I've found to those in the Alps that I did last year, and found myself rather a bit surprised to find how fast we were ascending the mountain this time on the slightly larger than a lane road that switchbacks it's way up the mountain. While it has not a tenth of the views of a true alpine road, it was thrilling and beautiful. Corinne trusts me enough that I tried to behave myself and keep it fun, but overall safe. 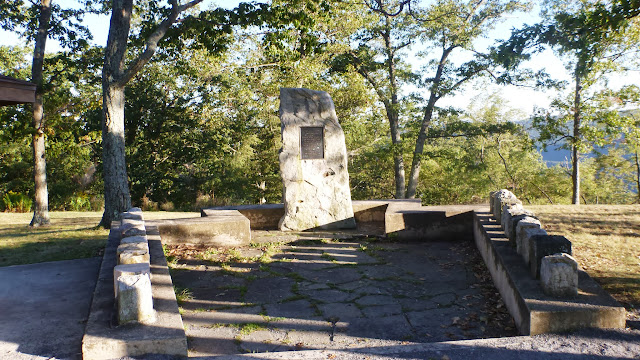 I would have loved to stay atop the lookout and watched a sunset with her, but we needed to find lodging and eat dinner, so off through Lock Haven to Williamsport we went.

After a misfire with a hotel that wanted $144 US dollars a night, we found a place opposite our favourite restaurant, The Olive Garden, and settled in after a wonderful dinner. Corinne quickly found that a day in the saddle means that you're not up to much in the evening other than getting everything all charged up for the next day, and falling asleep in the hotel room. Well, perhaps a bit more than that, but I want this thing to have a PG rating. :)

We had a mission. Corinne wanted to stop at a Dress Barn near Buffalo before we crossed over the border, and I located one in Cheektowaga, but had a huge conflict as I wasn't sure if I should do the fun route up Route 144 and over, or the fastest route, so I chose compromise, and went up Interstate 15 which turned out to be a lovely two lane divided highway with nice views and sweeping corners as it winds its way through the river valleys and foothills, until I turned off and headed via secondary roads north west towards Route 20A and the highway that would take us to our shopping destination. 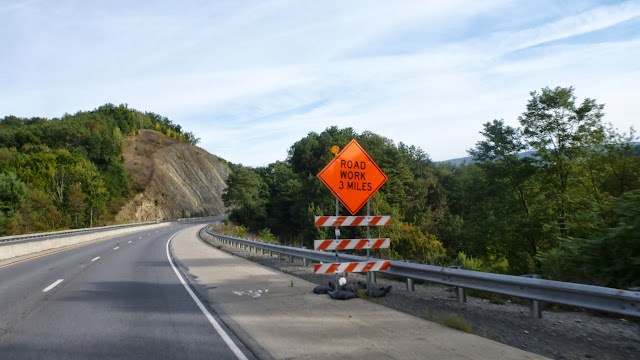 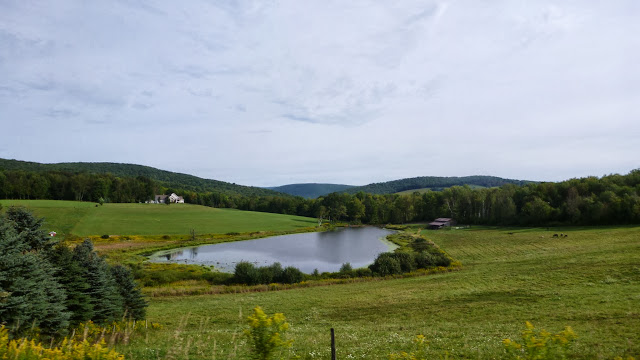 Route 6 gave us the opportunity to visit the western rim of Pennsylvania's Grand Canyon, and let me tell you, the road to and from was another trip highlight that I'll add to subsequent travels in that state. It was perhaps 30 minutes out of our way, but well worth the time. 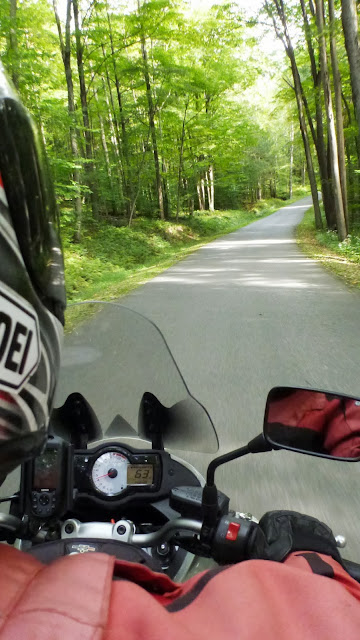 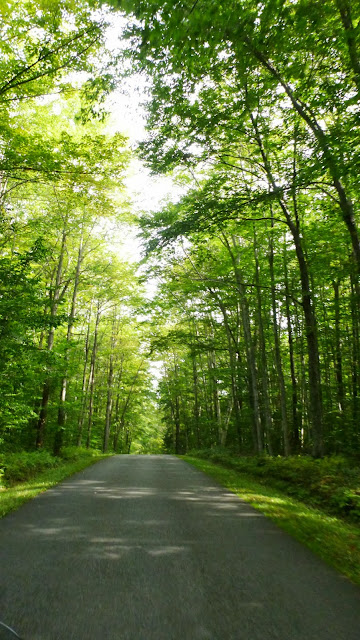 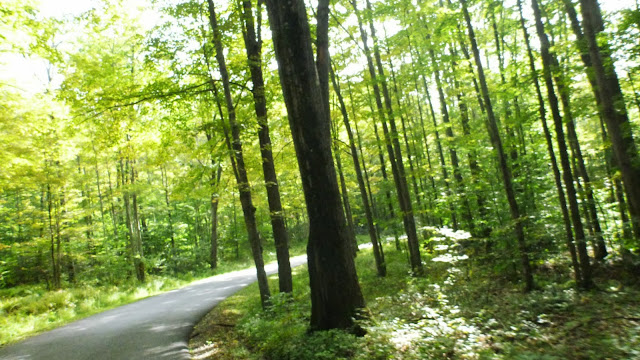 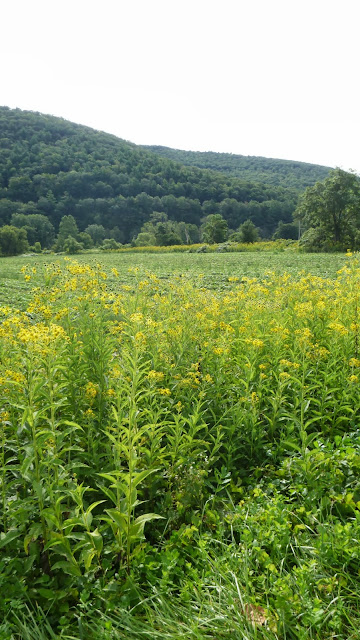 This next series of photos I have to thank God for looking out for us, as I was watching my GPS to see that we were about to cross a state line, and I wanted Corinne ready with the camera to catch a shot of the sign welcoming us to the Empire State. She did a superb job, but as she was readying the camera, I rolled off the throttle to give her time, so from a speed limit of 55mph, I was perhaps doing 35mph, when the deer vaulted the guard rail and ran in front of us.  Those of you who know my past can understand my fear of animals, especially deer. Three months recovering from a collision with one can do that to a person. I have deer fear, and it gets much worse at dusk and at night. Perhaps you will understand... 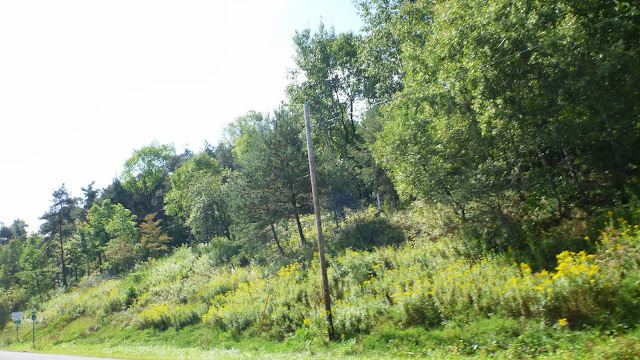 Corinne says she saw two, and I believe her, as they like to travel in a herd, but the only one I saw was on a collision course with the bike, and because I'd slowed down to let Corinne get a photo or two, I was able to keep the bike under control. Had we been doing 55mph, I might be typing this from my hospital room in New York State.


What a great ride, and even in spite of the butt burn and sore shoulders, we both had a great ride and saw many beautiful things, without a drop of rain in two days. The weather was perfect as was my companion, although we both agreed that I had underestimated the length of time we would be on the bike to get to Williamsport, so next time around, we take a few days and take our time.