What started out as a lovely summer's eve ride, turned into a bit of an off road test of the Versys. 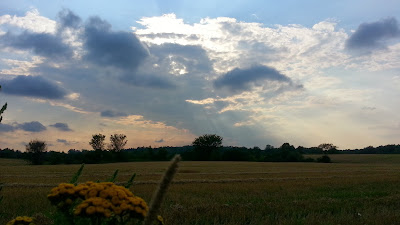 When Corinne and I left the driveway for a spontaneous summer evening ride, my thought was to head north until the scenery improved, that is, where the farms and forests began. I didn't really have a destination in mind, although I thought perhaps we could meander our way up into Port Perry and stop in at the Tim Horton's there, as well as see what the two wheeled traffic was like that evening.

Of course I had to turn the ride into an adventure when I saw the "unassumed road" heading north... And for what it's worth, my 2009 Kawasaki KLE650 Versys handled that portion well, although the rear suspension delivered a few jolts when I rode through the pot holes.  We stopped to take a few pictures of a spectacular view, then a few of each other around the bike, then headed north to where my Garmin 60cx GPS told me a road ran east to west in the distant treeline. 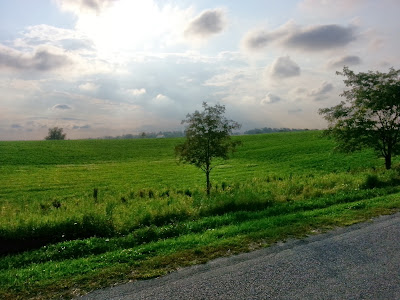 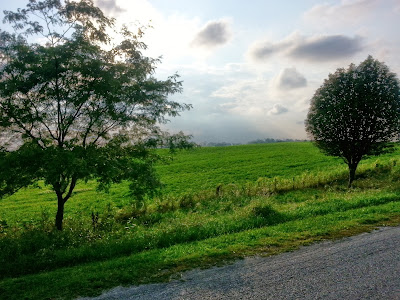 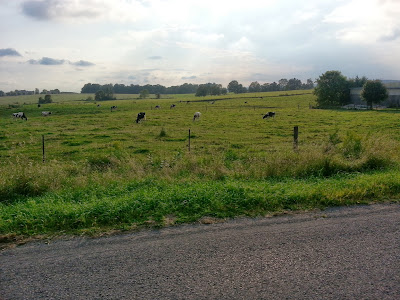 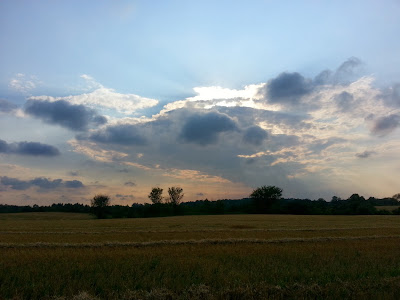 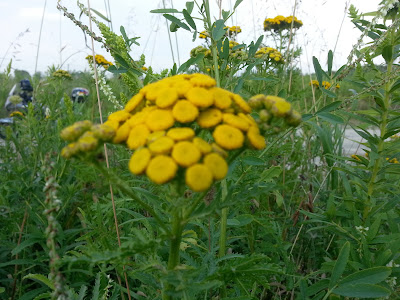 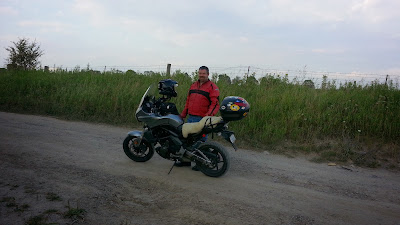 It was a road, if you are used to foot deep ruts, root branches, mud holes and rocks littering your thoroughfare, but the Garmin was optimistic that there was a road heading north a short distance down this "Road", and I assumed that it would be in similar shape, and navigable to take us north to the highway that I knew was there. Never "assume", for it makes an ass out of u and me. But we were making it, by riding the sides until the road closed in and I was in danger of falling into a rut, at which point, I slowed things down and rode in the rut itself, as I knew once my street tires fell into one, it was game over, or rather, tip over. We did alright riding in 1st gear in the rut, bounced over a tree root, and I was surprised to find the rear shock protested by bottoming out. Not much "adventure" travel there. *sigh*

Shortly afterwards, a little further down the trail, for it could no longer be called a road, I hit a rock larger then a softball, and while the front end bounced up over it, as well as the front pipes, it smacked the large exhaust can which bent backwards, breaking the weld and completely pulling out the pipe. Now I had a 1/4 inch gap between the front pipe and the can, so now we sounded like a V-twin rolling down the street in search of a Timmies. Wonderful!

The Garmin insisted there was a road just up ahead, but the trail was now turning to sand, and the Conti Motion tires did not like it, and protested by wallowing sideways on the front end, but a little throttle straightened her up to fly right.

That road heading north? It was there alright, at the top of a hill that I would have been able to make 'just', if I were on my DR650 or KLR650 with TrakmasterII tires, but with Conti Motions? Not a chance. Now the Garmin was saying that Old Scugog road was about a kilometre and a half further down Boundary "Road". But now the sand on the trail was getting deeper in the valleys, and I was constantly adding throttle to keep us upright, until I hit a long section of whoops that had me lose the front, correct, lose it, correct, lose it, correct, lose it, lose it, lost it! And down she went, a second gear tip over that had the two of us lying with our left legs under the bike, and wondering just how to kick this big bugger off of the two of us so we could extricate ourselves. My boot has an ankle strap that got hung up in the fairings, but I managed, as did Corinne. We made sure each other was uninjured, looked at each other, then began to laugh our asses off, and I said to myself, "This girl is a keeper!" 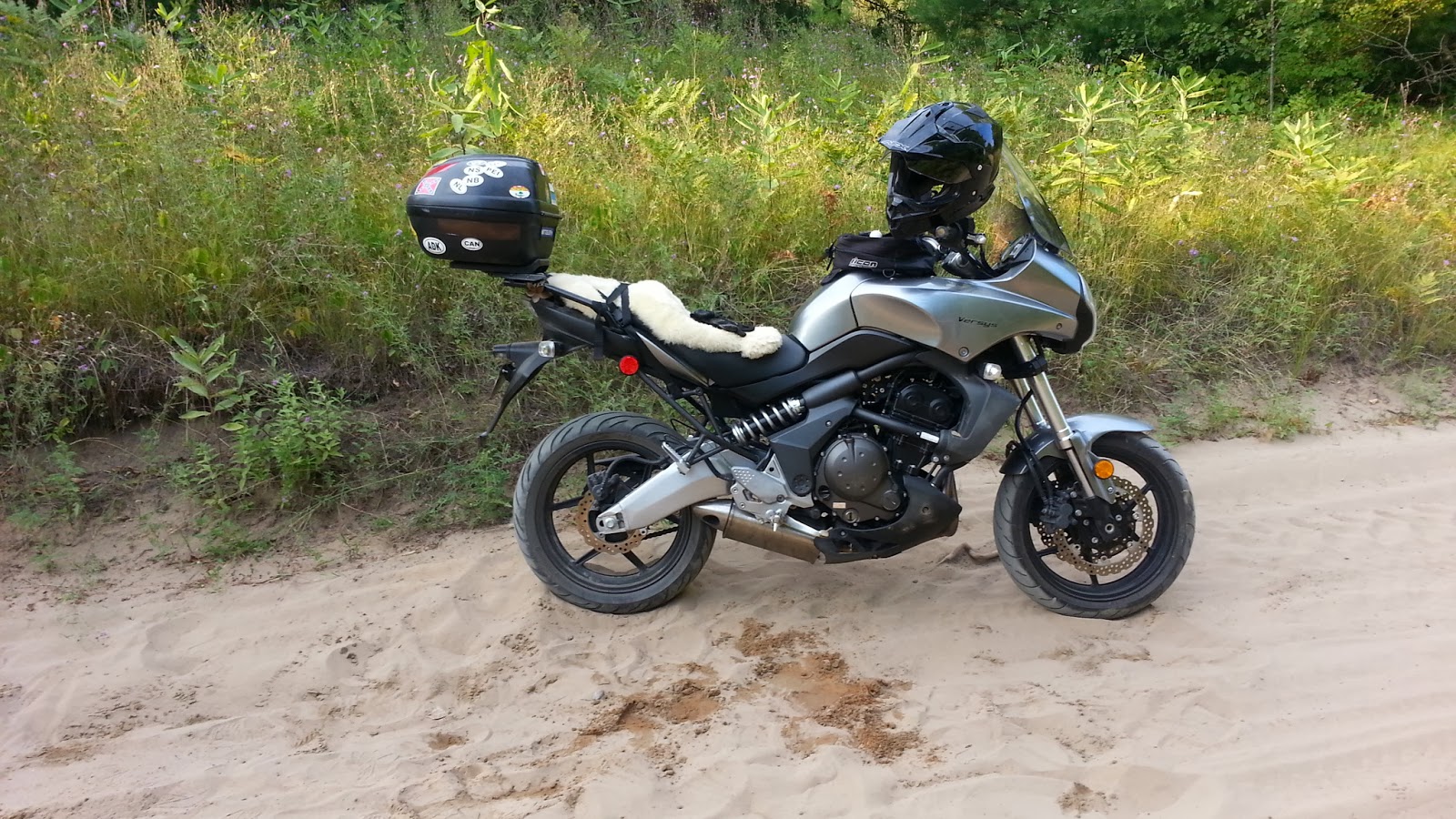 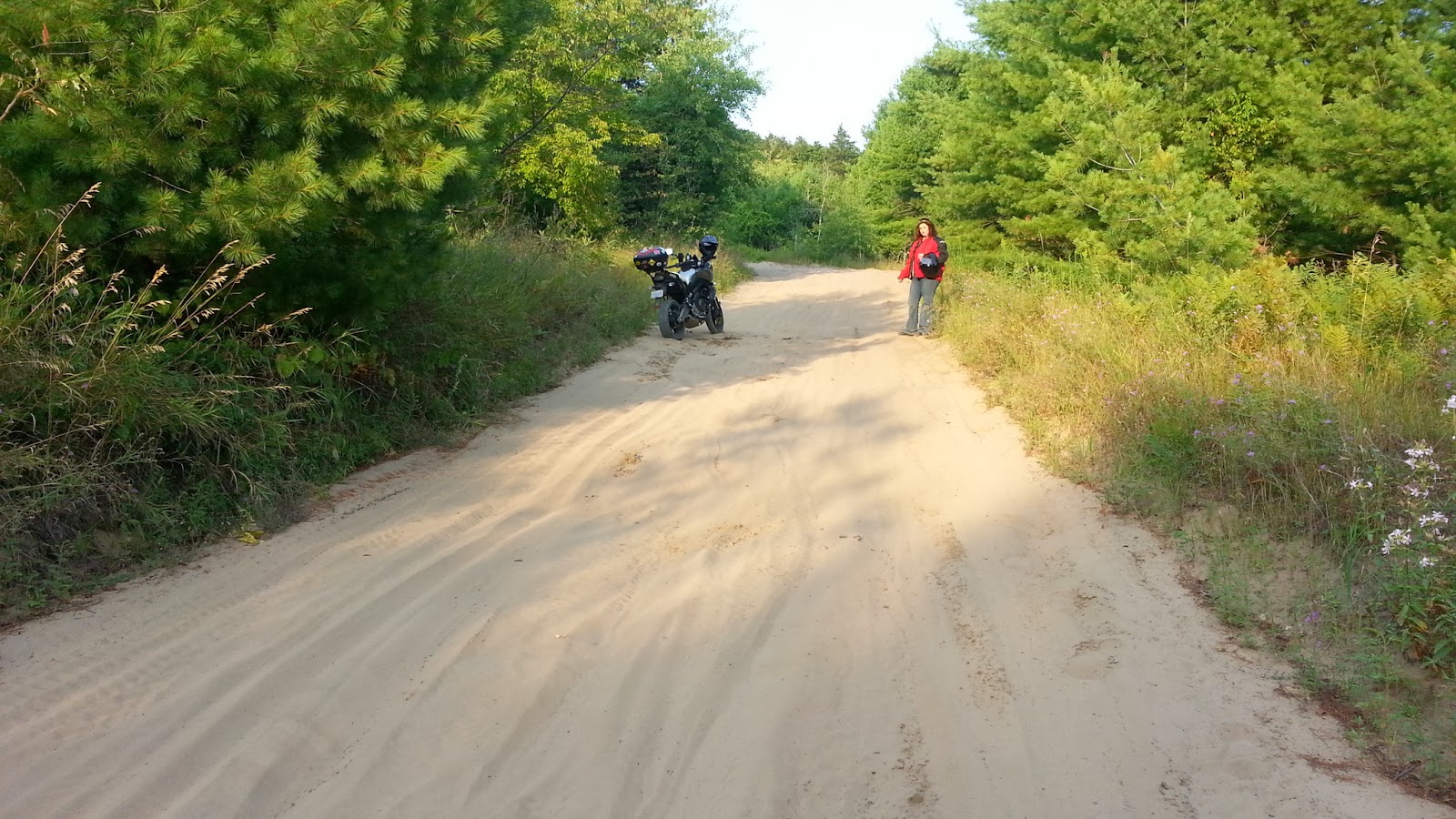 Did I mention it's a heavy bike? It lay on it's side leaking a bit of gasoline from the overflow pipe, and I tried to get underneath it and heave it upright as if it were a clumsy KLR or nimble DR650, but alas, it outweighed both of them, so I enlisted the aid of my Fiancee to heave the pig upright and get it back onto the kick stand, where it dribbled here and there while I walked around the bike and assessed the damage.

I was still smiling when I located a scratch on the plastic fairing on the left hand side of the bike, and a similar scrape back on the subframe on the rear of the bike, but I was very happy to note that I still had a right hand mirror and both turn signals. (See my Trans Labrador Highway adventure). 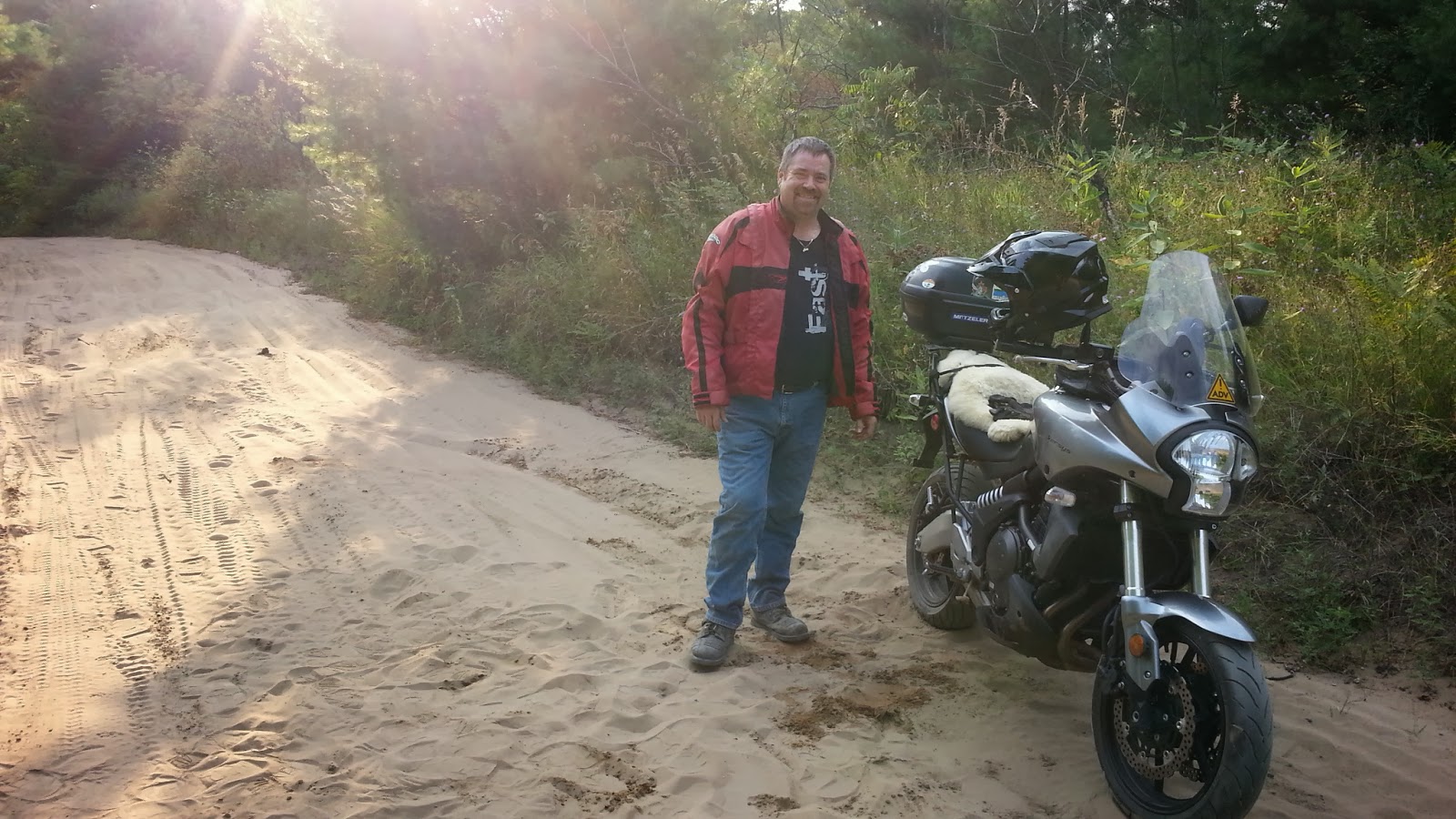 Okay, now I was worried as I had at least another kilometre to go, the sand was fairly deep, and I had lost some confidence, and was afraid that I'd dump the bike again and injure Corinne, so I apologised for the suggestion, but kindly asked if she would mind walking the rest of the way out on this hot summer evening? She laughed and said "Okay". She is a keeper. I'd see her walking through the sand, trudging along after me as I rode in first gear with my feet dragging on the ground for balance as I wrestled it east along the trail. I'd stop when I lost sight of her and wait for her to catch up, feeling guilty the whole time that I'd brought us to this...

An "Adventure Bike" that was too heavy, poorly suspended, and incorrectly shod to ride on these trails, and Garmin was lying to me! It was three kilometres to the road! I'd misjudged the scale of the map. Bugger!

Hokay, the trail turned back into hard pack, and I asked Corinne to mount up behind me, and we precariously made our way past the mudholes, sand pits and ruts to find fences appearing on either side of us, then graded gravel, and low and behold, was that tarmac ahead of us? I remember feeling this way after riding 1000 km of gravel in Labrador! Have I turned into a wimp or was I mounted on the wrong steed for this terrain? Sadly, while the Versys is a brilliant touring bike, and can hang with the sport bikes on the side roads of Ontario, the new rule is, if I won't take a Honda Civic down the road, I won't take the Versys down it either. 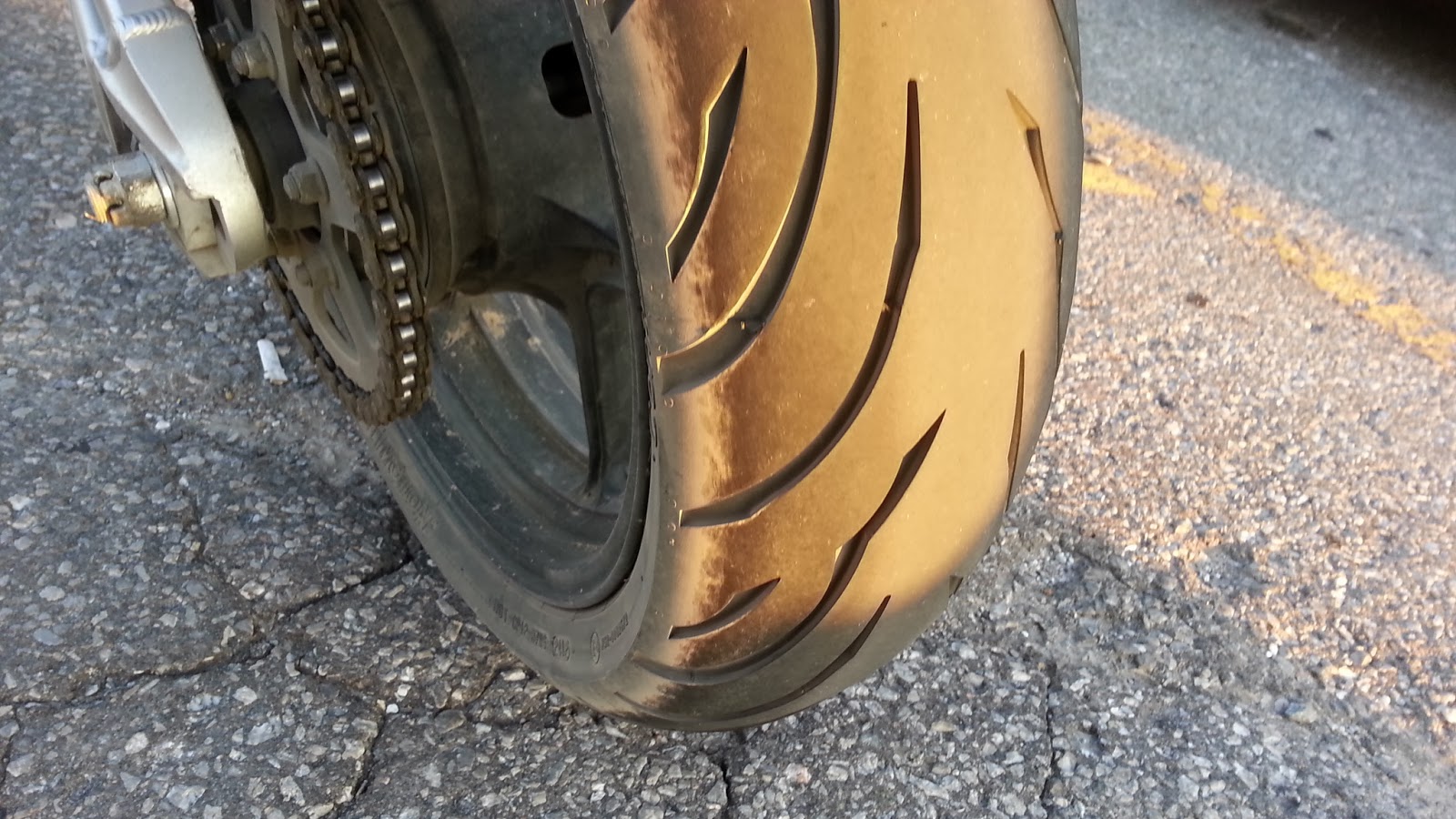 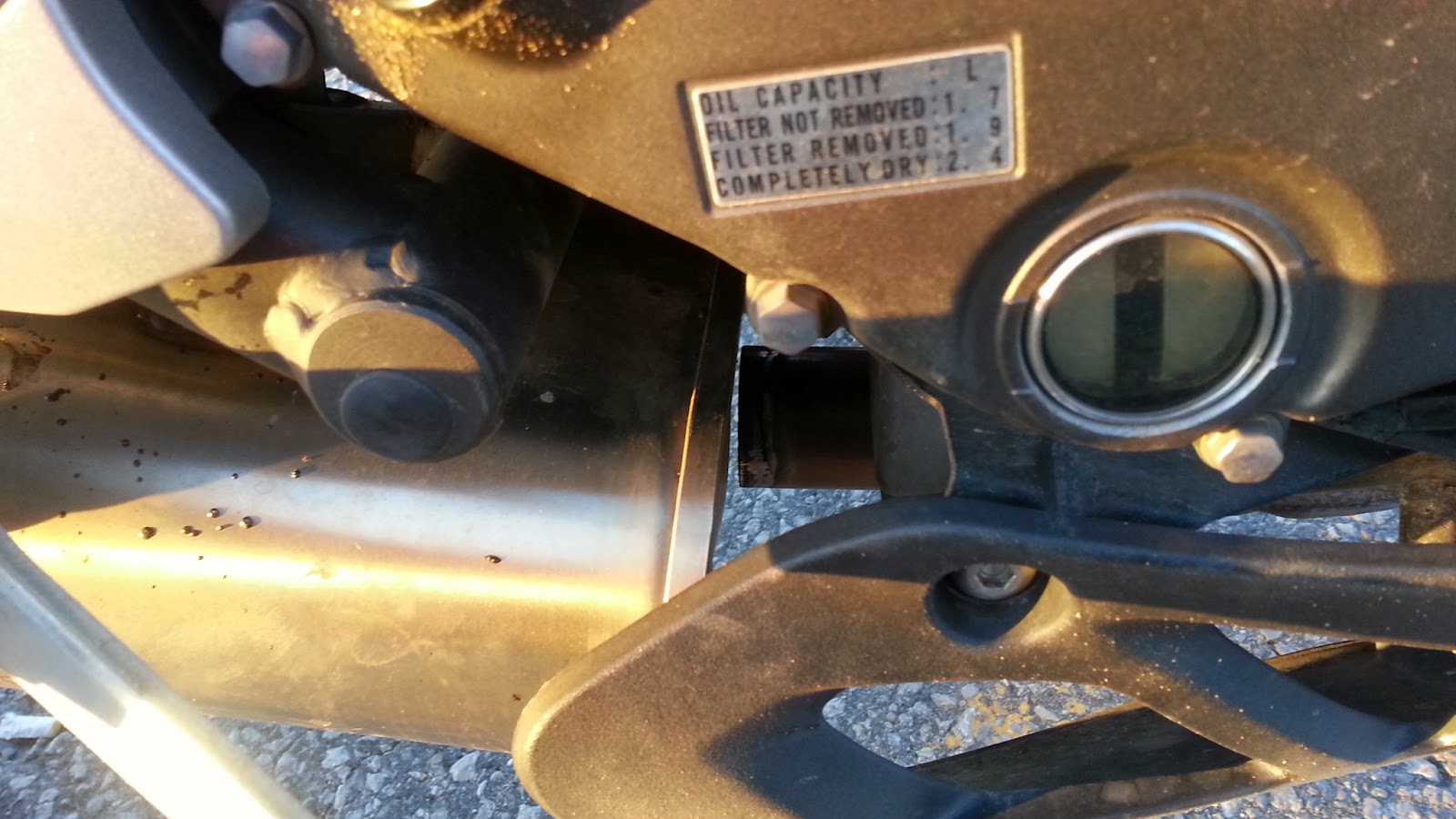 Now the bike was in it's element, tons of torque to hurl us down the road past the homes, the farms, the horses and cows... All while running on straight pipes, the roar of the parallel twin engine reverberating from the trees and homes to assault our ears. and trying to build up speed respectfully, pulling in the clutch and coasting past those homes, farms, horses and cows to begin our circle home through Blackstock and on  to the Blue Heron Casino to try and change our luck.  Later on we snuck into Port Perry for a well deserved cup of coffee and chatted with a group of bikers that were enjoying the beautiful weather.

So, at the end of the day I have a scratched bike, a busted can, and a beautiful fiancée who had a good time and won't stop laughing and poking fun at me, all the while telling me that I did a great job handling the bike in those conditions.

It wasn't such a bad ride after all, and the dollar signs are all off the bike, and I can hold my head up while parked next to those expensive adventure bikes that never leave the asphalt, and on another good note, the exhaust can was welded and put right by a local shop for $20 cash in hand. Sweet!