I had this ride in mind for last fall, but never managed to squeeze it in before the weather turned and I had to put the bike away. The weather reports were calling for a 14 degree Celsius spring day, and I was eager to get out in the sunshine and take some photographs in the bright light, but the temperature fell, and by the time Sunday rolled around, they were calling for a high of only 8, so my start was about 3 or 4 degrees as I rode down to Desable for Sunday breakfast at CT with my family.

I was wearing some summer weight long underwear, underneath some very heavy water & wind resistant denim riding pants, but I could feel a slight chill on my legs while riding along, and I hoped that I'd be able to complete the ride in comfort once the sun was higher in the sky. I'd brought my heated jacket, but didn't feel the need for it at the moment.

Having grown up inland, I'm always fascinated by the estuaries and inlets that criss cross the Trans Canada Highway which runs largely parallel to the coast as it winds it's way into the Provincial capital of Charlottetown. 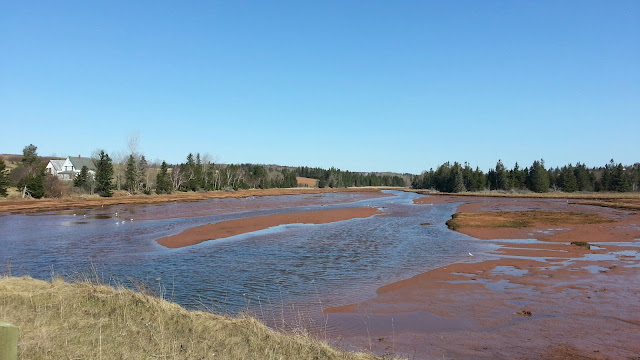 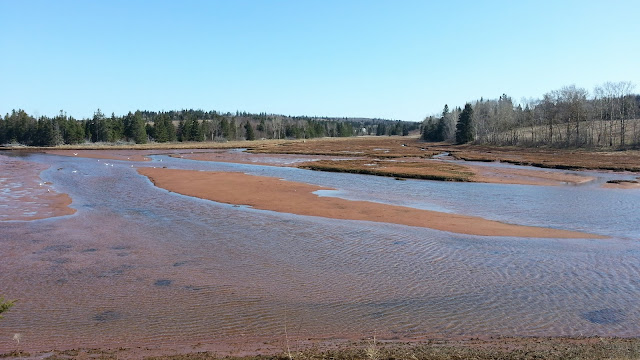 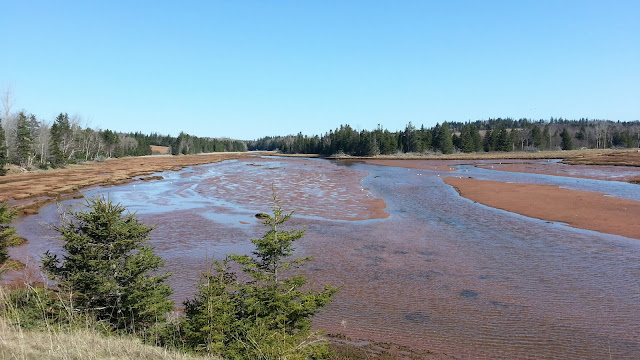 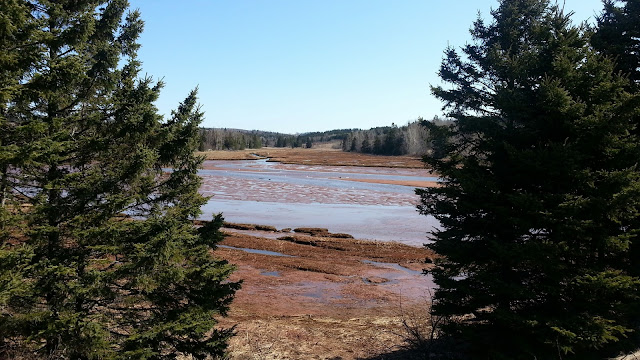 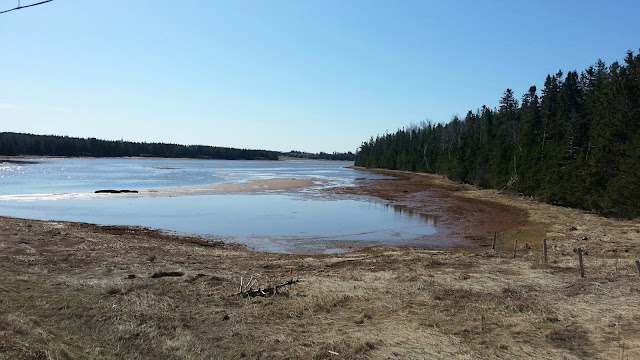 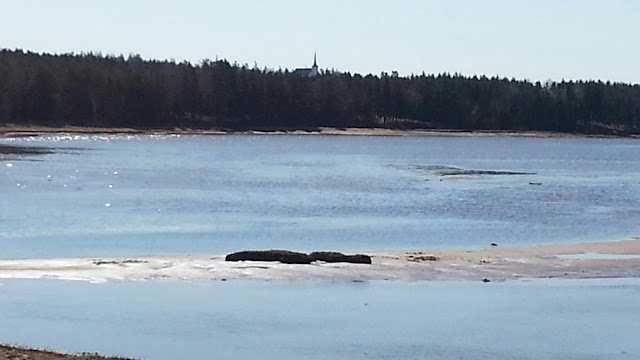 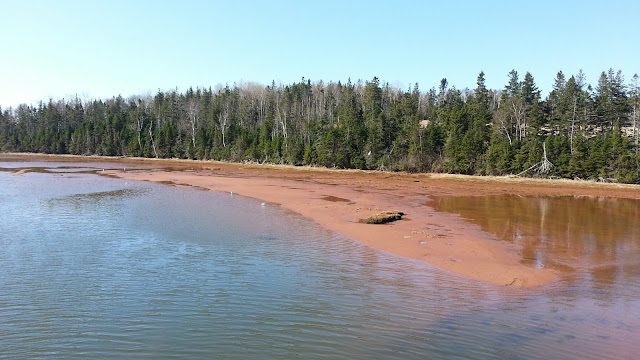 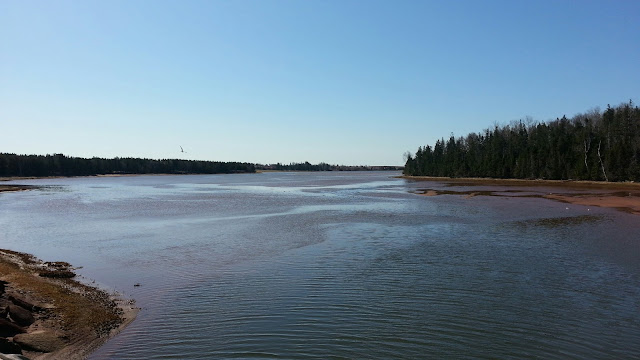 My nephew's arm is recovering from his get-off his dad's BMW F450X last month. (I did not mention any names or tag anyone! ;)

Once breakfast was over, I had to use more choke to warm up the bike, and while the sun felt good, a fresh breeze chilled the flesh, and reminded one that spring was late arriving on the Island this year.

It made one mindful as I hit the highway, and while my legs were alright in the extra layers, I was wishing I'd worn my winter weight thermals. I'd survive it, ride on!

For a dual sport, Prince Edward Island offers up a mixture of smooth asphalt, broken and patched roads, and a number of gravel and clay roads that can be a lot of fun when dry. The DR650E is a light bike, and really lets you feel the wind, but once on a few gravel roads it comes into it's own and thrills me time and time again.

I'd been out this way this past winter in the cage, and passed by a sign for "Buffaloland Provincial Park" but didn't see any Buffalo at the time, however they were out in their paddock enjoying the spring weather, and a motorcycle and rider was a pleasant distraction for them. 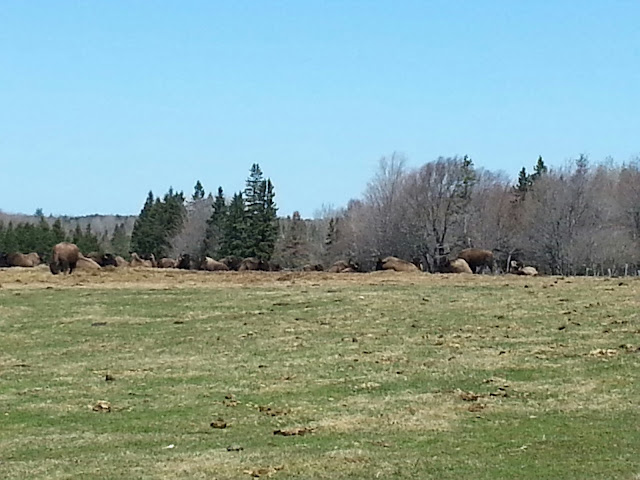 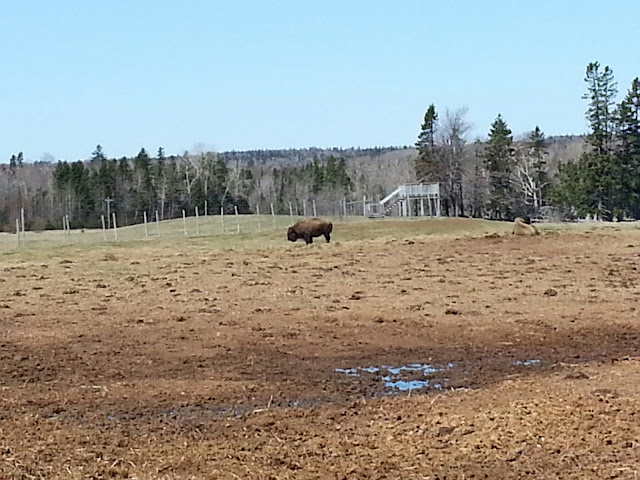 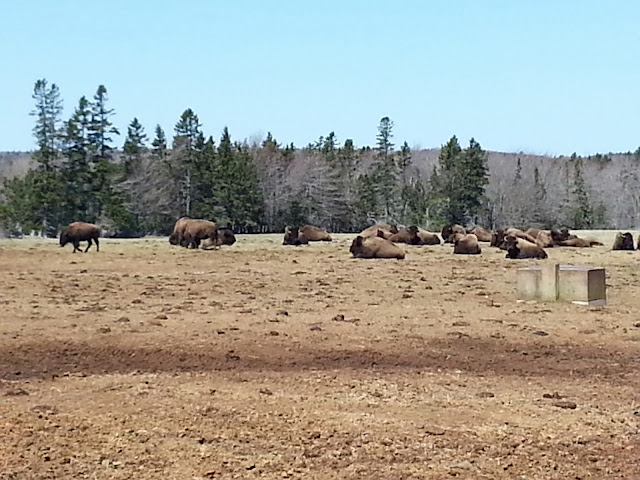 I set out for Panmure Island again, and ran across this sight... The Lobster season starts tomorrow, and these traps would be out for the two month season, so the fishermen bring down their traps, bait them, and load them onto their boats on the Sunday so they are ready to roll first thing in the morning to start the season.

The traps require more work over the winter than I had thought. They get the obvious repairs needed, the marker buoys are replaced or painted as needed, and the traps this year had to change the entrance to the trap to meet the new fisheries rules, as well as thousands of bait bags prepared for the season. Each trap has to have a opening in the mesh sewn shut with cotton string, the concept is if the trap gets lost to the fisherman on the bottom of the ocean, the cotton will deteriorate and allow the lobster, crabs etc to escape.

Each fisherman chooses his own style of trap, so some are rectangular with mostly mesh, others are the familiar dome wood lathe style, or a mixture. Even the bait in the traps is done differently, with some choosing to use a bait bag made of nylon mesh, others clipping a fish into the trap, and some hedging their bait, and using both the fish and the bait bag. ;) 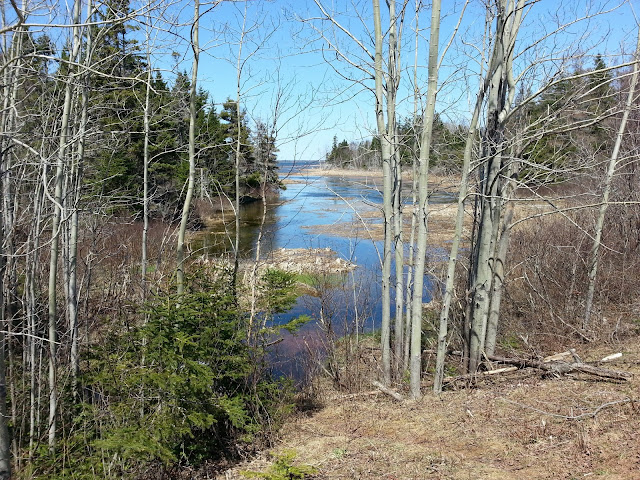 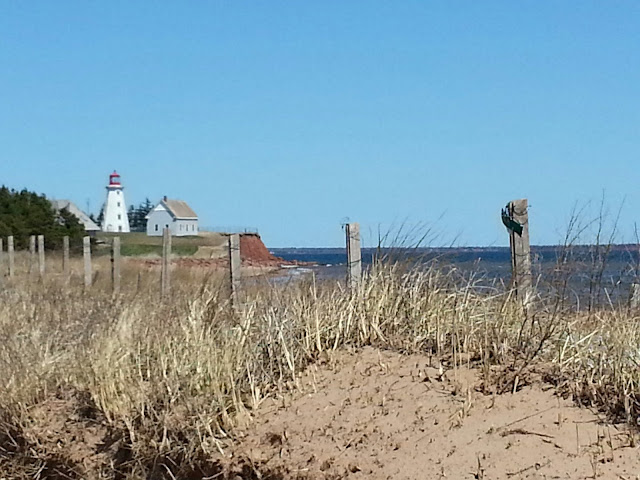 Panmure Island has a causeway that leads out from the mainland, with the windward side having a large buffer zone of sandy dunes. The sand dunes have a sensitive ecological sphere, and when man carves a path walking cross the vegetation, the wind can pick the sand up and throw it across the roadway, or further into the bay allowing high seas to finish the job that the wind started, and wash right across the roadway. Signs are posted all along the shoreline advising people to stay off of the dunes. On some places, boardwalks are placed so tourists can visit the beach itself without damaging the dunes that provide habitat and protection for inland marshes and wildlife.

The following is an extract from here: http://www.gov.pe.ca/infopei/index.php3?number=66340&lang=E


Panmure Head Lighthouse
Built in 1853, located on the southwest extremity of Cardigan Bay. It marks the entrance to Georgetown Harbour, on the east coast of Prince Edward Island. It is connected by highway with the mainland on the South across a sand beach.
A lot of changes were made to the light stations and new things were being added as science got more advanced.
The light tower was constructed in 1853. It had a wooden octagonal tower. This light was used as a coast light serving considerable steamer, schooner, and fishing boat traffic. In 1909, the dwelling was built. It was reconstructed in 1958 as the building disintegrated over the years. It was made as a one and half storey. In 1908, the fog alarm building was put together. It consisted of a wooden frame structure. The garage was also built and it also consisted of a wooden frame structure.
In 1986, they had three options with regard to Panmure Island lighthouse: the first being that they rent it with a maximum lease of five years; the second being that they sell it with the building being removed from the property; and the third being that they sell it complete with a parcel of land. They chose that it would be sold as it would not be preserved as well if rented out to different people.
At present, the machinery at the Panmure Island lighthouse is operated electrically.

Height in meters above ground: 18.6 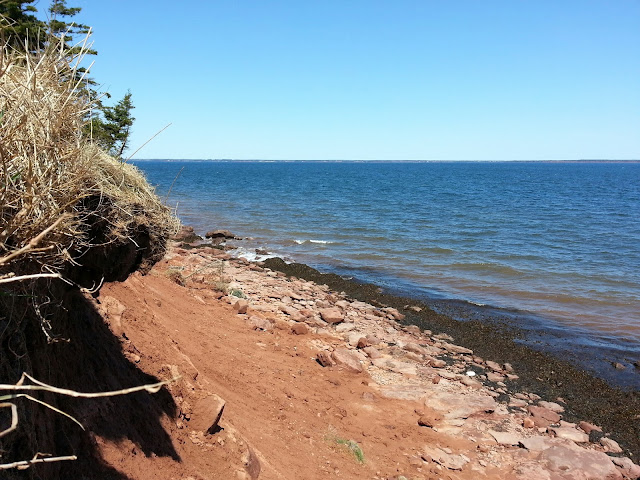 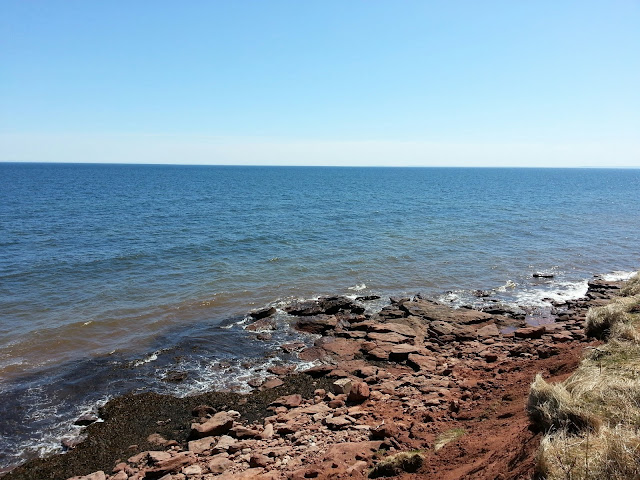 Right, now off to see more of the Island. Over at the Western end of the Island where the road turns to gravel is a nice beach, wharf and park area. Although it would seem more suited to pleasure craft than working fishing boats, for I'm really not sure why it's there, so perhaps I should ask around a bit. 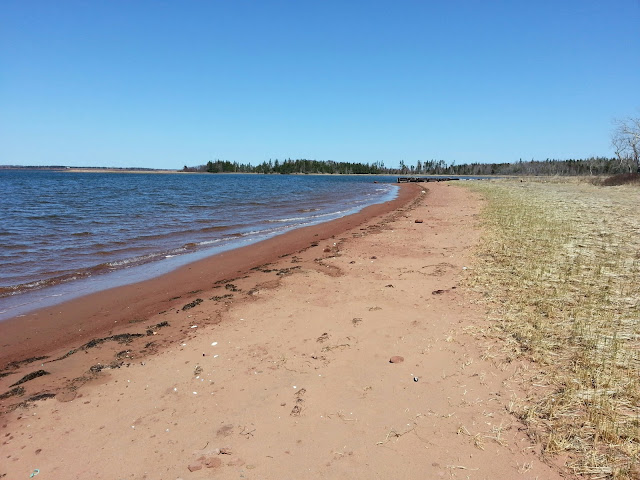 That was short and quick, for there were only four stops on the small Island, one along the dunes on the causeway, the lighthouse, the wharf, and a dead end road I tried, but lent itself to no photos. (I was too lazy to get off the bike and climb down the sand and rock to get to the beach, and besides, it was indistinguishable from the last beach at any rate.) 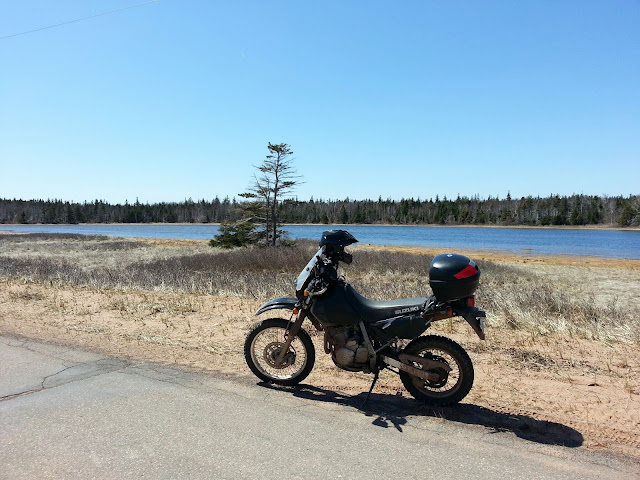 I thought I might run across Danny and Robert getting the boat ready down in Beach Point, but they rise well before the sun, and were long finished and headed home for the day before I rolled out onto the dock to get these pictures of the boat loaded and ready to go. 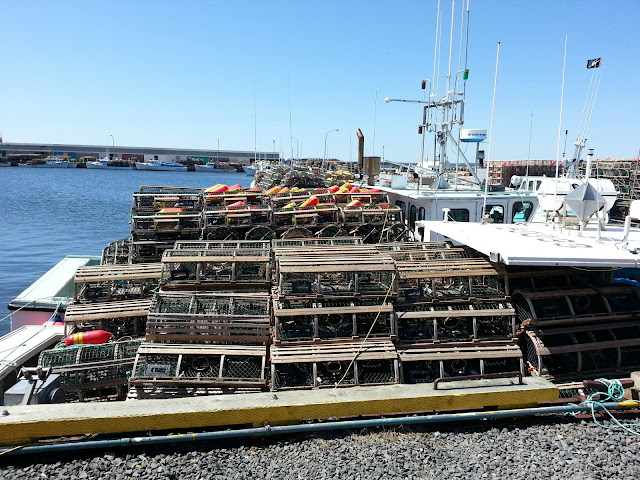 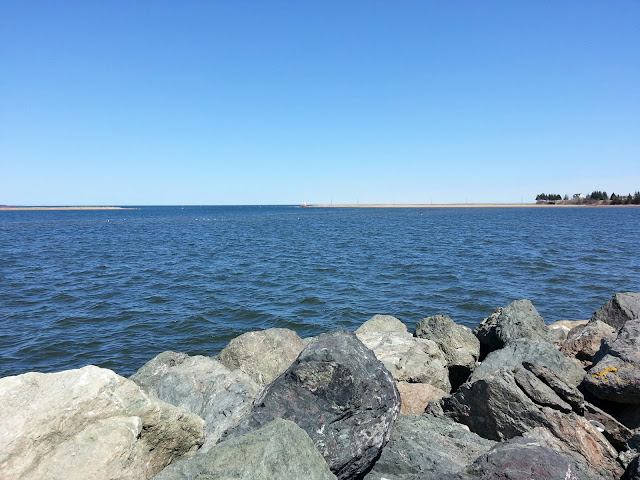 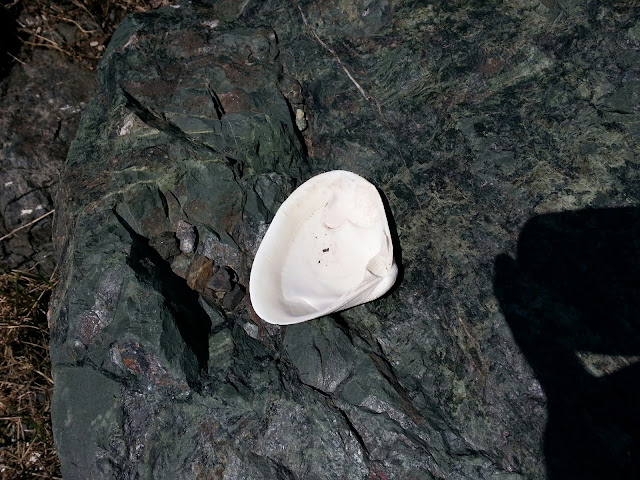 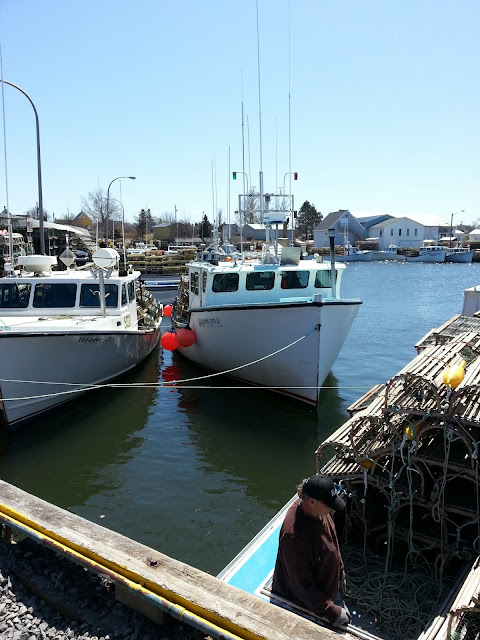 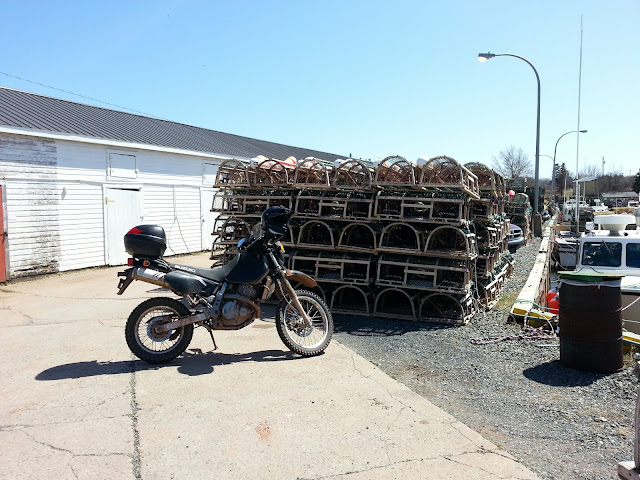 Okay, so I arrived in Montague around 1430, and stayed until about 1700. By that time, those chilly morning breezes had turned into a rather cold wind that I rode into the teeth of all the way back. It felt like the air temperature had dropped a couple of degrees, and once again I was to regret not wearing a heavier layer on my legs. Oh, and I learned another lesson the hard way... When you start to get cold, pull over and plug in your heated vest you idiot! Instead I toughed it out and arrived in the driveway happy, tired and unfortunately a bit cold. :P


I hope you enjoy the pictures as much as I enjoyed taking them. Cheers!