It never starts out to be a lousy day, and in point of fact, barring the collision and associated events, it was a great day to be out on two wheels and with my friends. The route was going to be circuitous and far longer than a cager would feel necessary, but it's not the destination so much as how you get there. 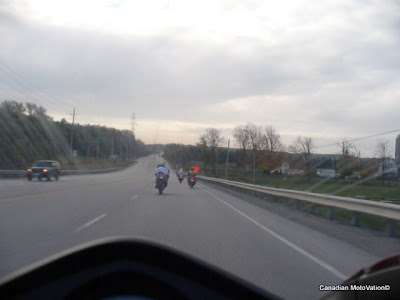 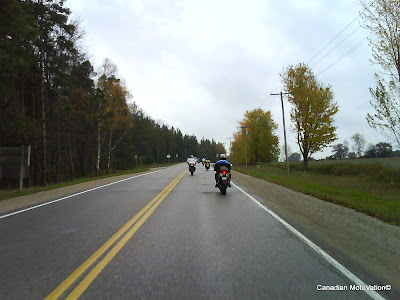 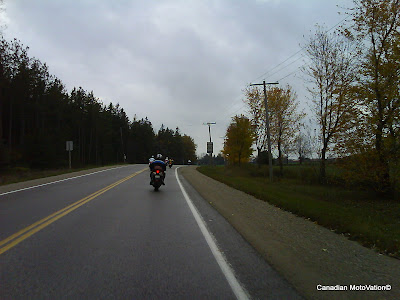 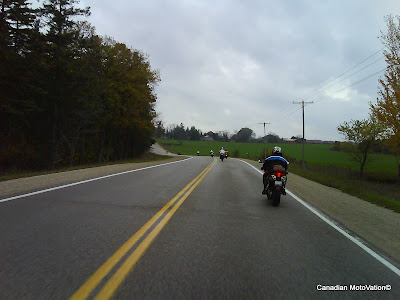 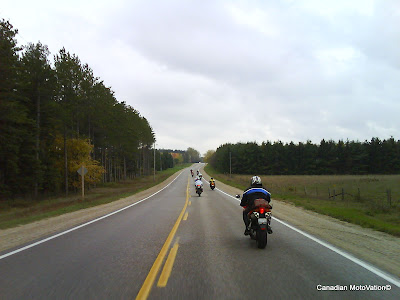 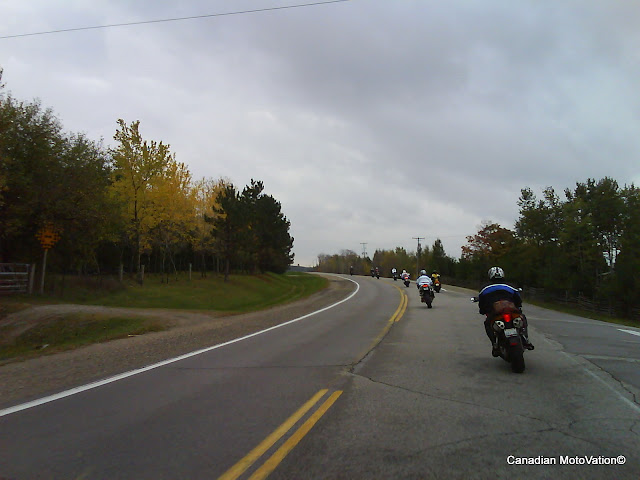 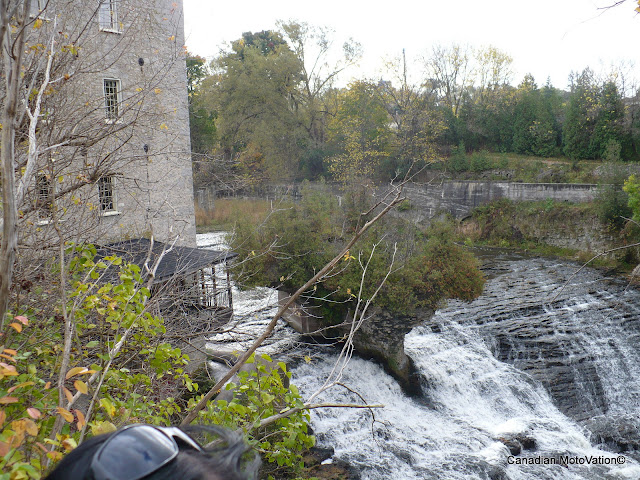 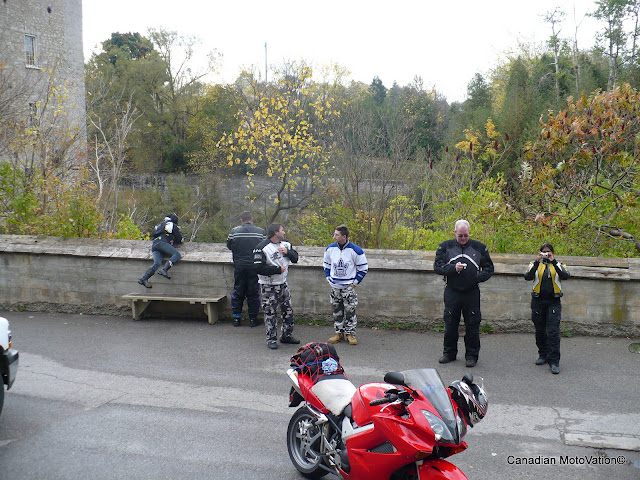 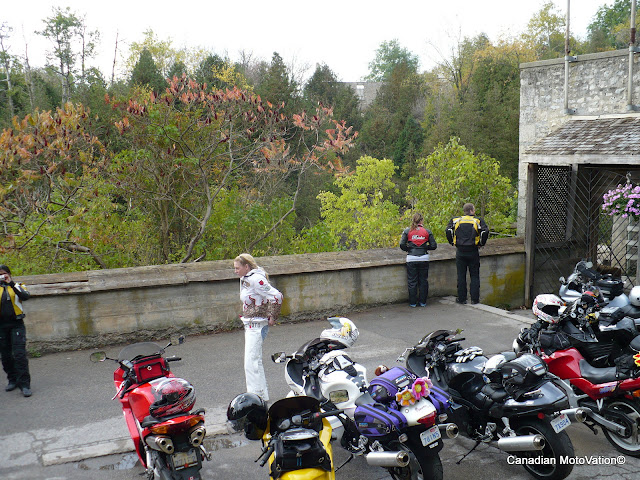 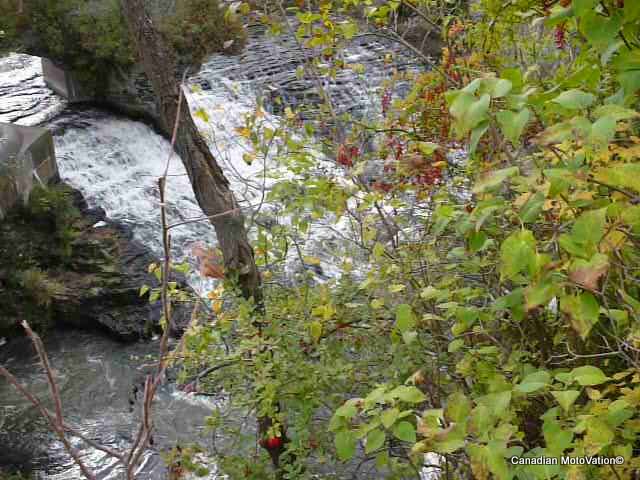 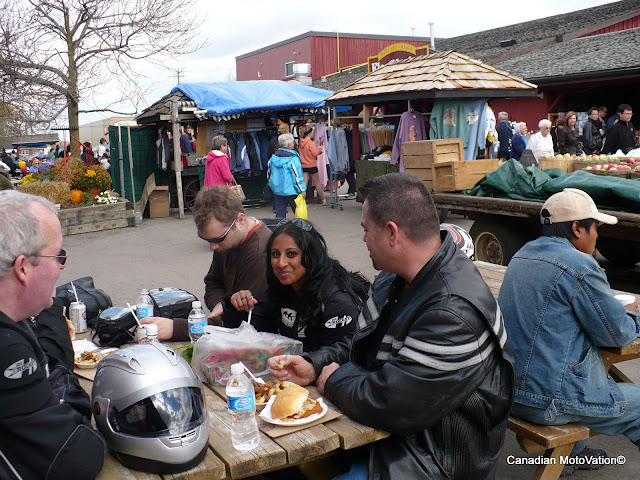 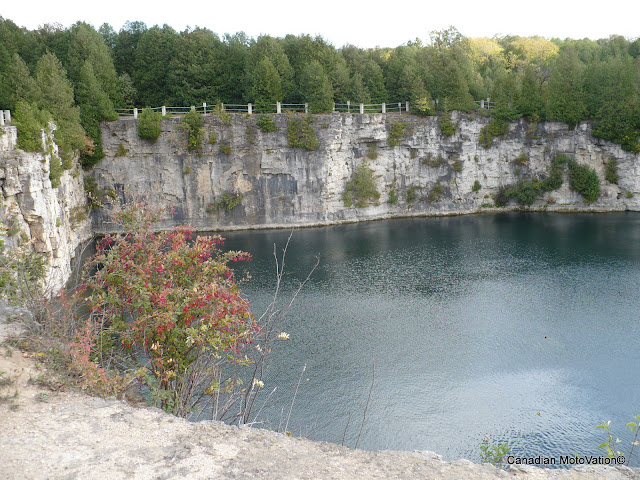 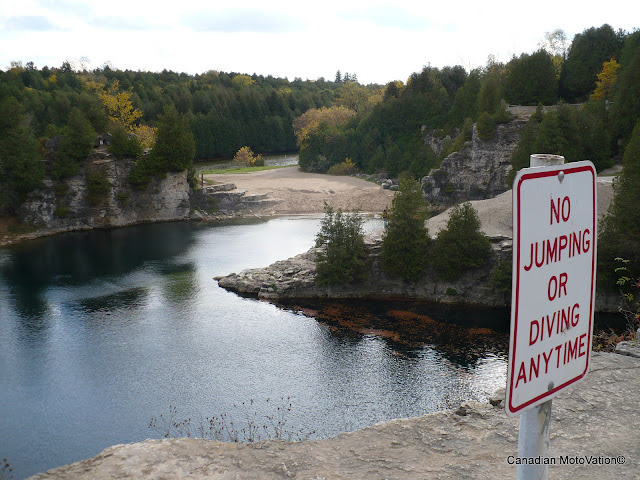 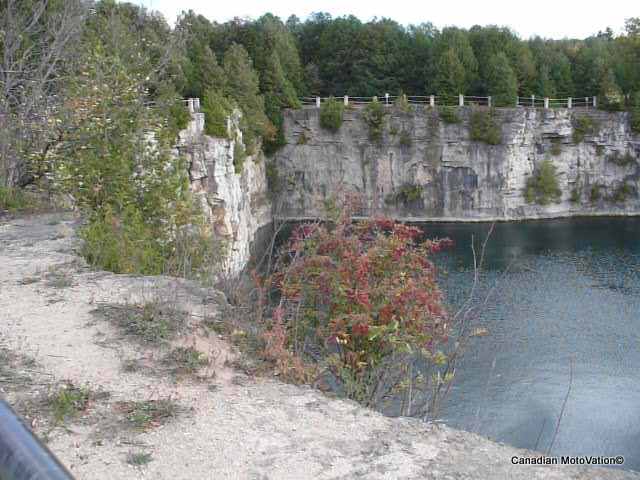 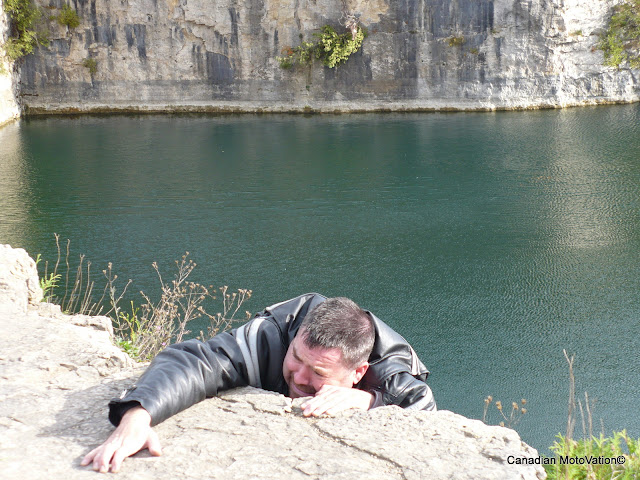 Here's where the my day takes a turn for the worse. The group merged into traffic and began to head East, but a couple of us got stuck behind a cager that split our group in two, and I had no clue which way Rich was going to lead them from here, so I was a bit desperate to catch up and I made the mistake of passing some stopped cars on the shoulder and collided with a vehicle making a left turn across the highway in front.

Suffice to say that I think I learned my lesson, plead guilty to the ticket and have dealt with the consequences of that err in judgement for a long time.

What can I say? Limit your risk and never make assumptions about other drivers or their abilities as you may be unpleasantly surprised.

The following pictures detail the collision and my reaction to it. I was very happy not to have been seriously injured, and in fact got off without any broken bones at all. My friends helped me at the scene, and as I had already spoiled an otherwise perfect ride for them, saw no reason to make it worse by my demeanour, so I soldiered on and was glad of their support and attention.

Thanks guys, you're the best! 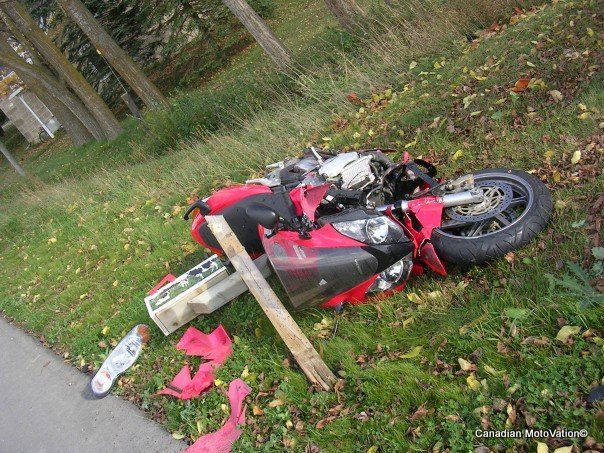 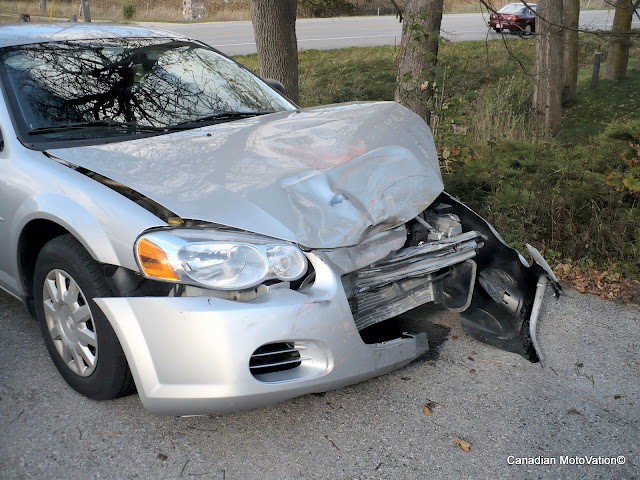 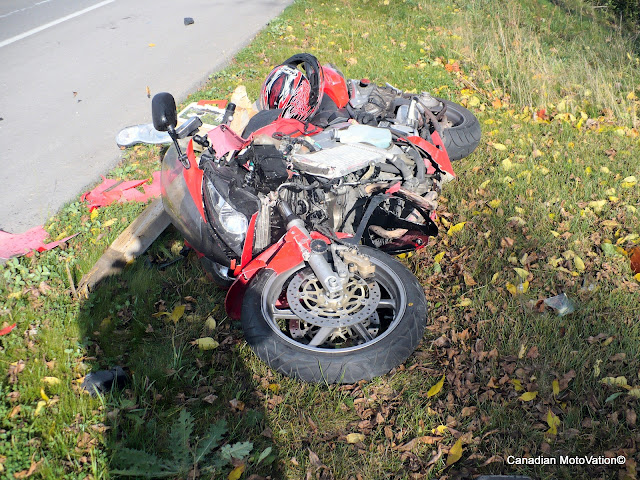 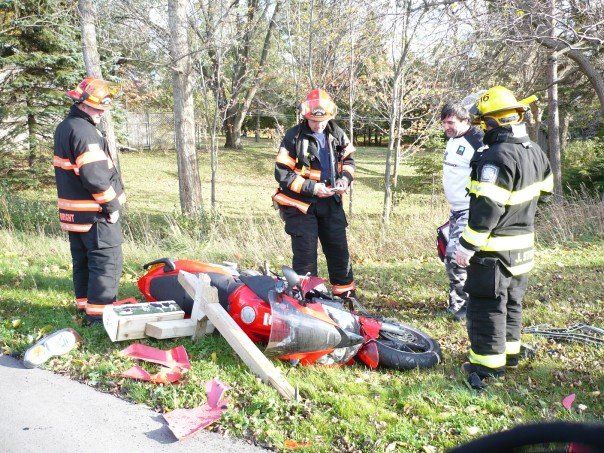 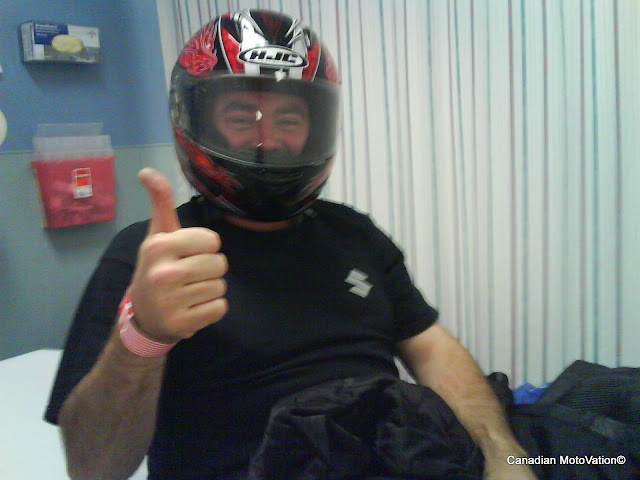 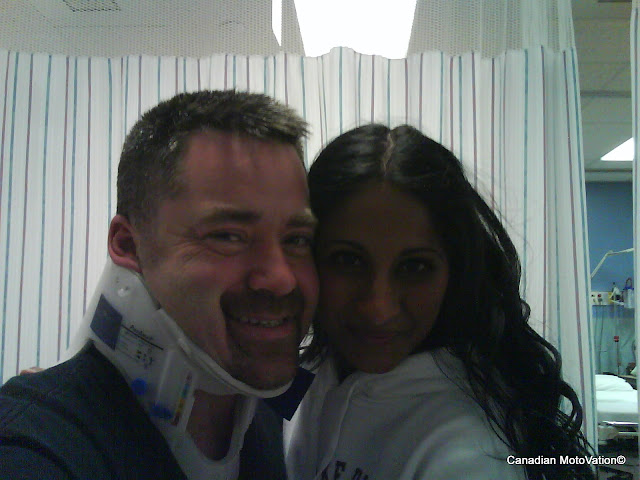 I was undergoing a separation from my wife at the time, yet she was good enough to drive out from Newmarket and come collect me from the hospital in Fergus when I called asking for the favour. Thanks Caryl, I still appreciate it. 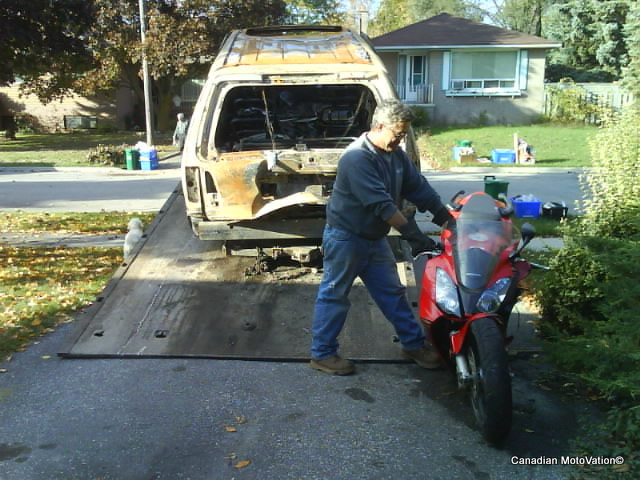 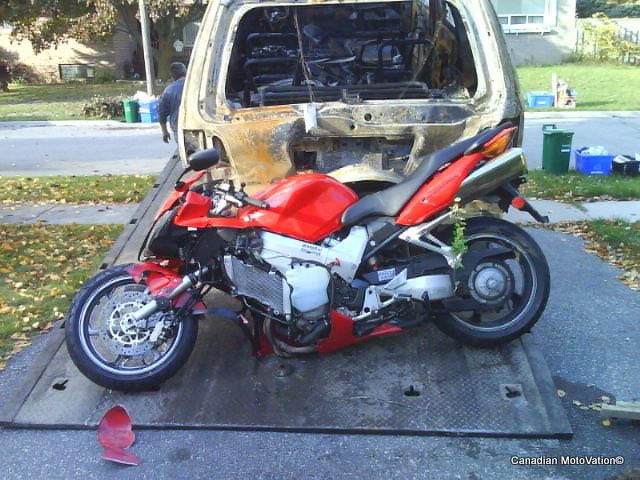 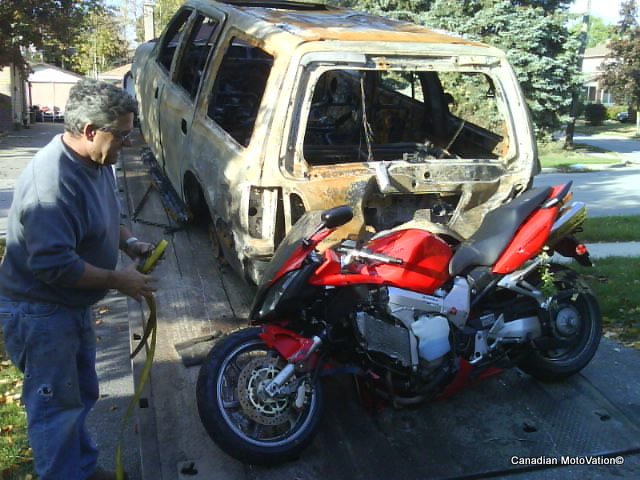 So at the end of the day, what did I learn? Not only do I surround myself with some amazing people, but getting into an at-fault collision in the province of Ontario has been the most expensive mistake in my life. My bike was fully covered and the insurance paid out, my wages were insured with short term disability, but I ended up on facility insurance as my carrier dropped me after 21 years, and my car insurance went up by 400%, and higher when I moved south into Richmond Hill.

The ticket is off my record, the accident will affect my insurance for ten years before I can say that I've not had any claims in the past ten years, and I drive my car at the speed limit with the cruise control on to prevent any more moving violations.

So now you know why I'm posting these, it spurs my memory to recall that driving is a privilege not a right, and that I need to limit my risk while on the bike or in the car as it's just not worth the rush.

Allan M. gets the photo credit for the bulk of the pictures here as my camera was at home that day.