2021 Tubing down the Oxbow River with Stewarts Tubing

My sister Wendy-Sue invited Caroline and I out to go tubing last year near Miramichi New Brunswick with Stewarts Tubing, and we had an absolute blast! We talked about going again this year, and it was easy time to decide that we'd love to go...

Caroline got some custom made silicone ear plugs and prefers them to the 3M foam type that she used to wear in her helmet. I've a decent set of them on my bike I always pack, but I can't wear them very long with my helmet and windshield set up.

I had to stop in Murray Corner today as there was no one wading in the brook at all, and the scene was so well lit.

Caroline took us via Shediac via a few back rounds or as I like to say, a route known only to her with lots of twists and turns. She made it fun until we got dumped back out onto the relatively straight road headed north on NB 126 that would take us north into New Brunswick and put us on track for our tubing adventure to come in Lyttleton NB along the the Little Southwest Miramichi River.

We stopped for fuel in Rogersville NB, and decided that for speed and convenience sake, we would grab a quick meal at Tim Horton's, but we were quite happy to grab and go back out to the bikes and sit down to enjoy our coffee and lunch. I made sure to order a donut with my meal. (I don't get out much)

If I haven't already mentioned it, this road is pretty straight with not a lot that will interest you on a second run, so we glossed over it until we found ourselves pulling in to Stewarts where they asked us to put our bikes right up next to their "command n' control" trailer so they could keep an eye on our gear for us, which was very nice of them. They go out of their way to take care of their patrons, AND offer dog tubes... How cool is that?!

The water levels were higher this time of year than they were last year, but I still spend a portion of my time walking instead of floating. Don't get me wrong, I still think of this as wonderful for a Saturday, and at $20 for an adult, it's an inexpensive way to get out onto the river and soaking wet! I had so many pictures from last years run that I wanted to take less gear, so left all that on my bike and brought only a hat and my camel back. Sorry gang! Here are a couple of pictures from last year's tubing and camping adventure:

There were a bunch of kids camping next door to Stewarts at Red Rock Lodges & Campground, and if we do this again, I think I'd like to try staying with them instead of at Wilson's Point at the Enclosure camp ground. They were out on the bridge jumping down into the river below, and that looked like great amounts of fun, with the exception of one young teenager that couldn't quite work up the nerve to make the jump, we cheered him on, but drifted right on past while he worked up the nerve to go. When he finally did make the plummet, he arose from the water to the cheers of his fellow campers and the tubers heading back for a landing at Stewarts to hand in their tubes and retire to the changing rooms to call it a day.

Caroline has a colleague that works in Miramichi, so we were going to camp the night at the Enclosure. But first it was off to the Atlantic Superstore to buy supper for the night, and to fuel the bikes up for the ride home in the morning. We bought our usual four litres of water, along with a baguette and some boil in the bag roast beef au jus along with some sliced cheese and chocolate for dessert.

Back at the Enclosure Campground,  They sent us on a bit of a wander, but we found our spot, and with the showers and washrooms located handily, it was time to pitch our tent and get supper on the go, but first caroline had to sort out a turn signal that had done it's best to part company with her and the bike, dangling by the wires only. She was able throw it back into it's cell and lock the door on it.

On a side note, that cutting board is actually a large plastic fan or flyswatter that I cut the handle off of. It makes a super light weight cutting surface, much superior to a manky old picnic table top.
"Hey kids! Who wants pine splinters on their sandwich?!"
"I do!"
"Me too please!"
...said no one ever.

Miramichi NB to Charlottetown PE
Approximately 350km
We woke up, had a shower and packed the gear away, then headed into Miramichi to make our morning breakfast with Caroline's friend and her husband who was originally from Australia. I really enjoyed the breakfast time chat, and the food was pretty good as well at the restaurant that they chose, the Kingsway Family Restaurant. 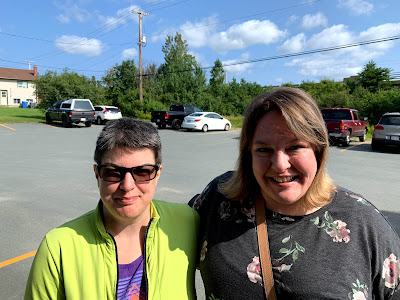 Right, so Caroline really wanted me to take a picture or two of her motorcycle in front of this sign. I have no clue why, but there you have it, mission accomplished my dear.

This is a picture of me taking a picture. The pressure was so intense, I mustn't mess this up!
I hate to say it, but our return home was anti climatic, but as always we had some fun and made it home in one piece. Thanks for following along with us!
Cheers! 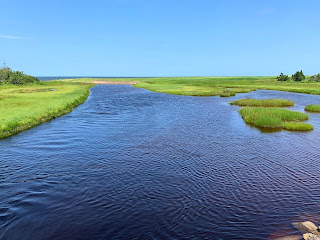 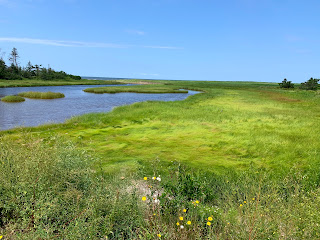