Caroline provided the name for the ride while I supplied the means. She's been having some soreness in her throttle hand, and the KLR is not the best bike to be riding unless the doctor ordered vibration as an effective treatment for it. Nope, so the ride we had half planned for today was cut a bit shorter as she elected to leave her toxic green steed at home in its stall, while I lowered my passenger pegs for her use.

I did take the newly repaved Route 13 or Dock road from Kinkora road into Carpaud. It has some wicked curves, and until it gets broken up again in a few years, it's in perfect condition for a a bit of hanging off the bike as you sweep from left corner to right corner. I kept my speed down but had a lovely run nonetheless, thank you very much.

A quick stop at Harvey's general store for some after lunch treats, and I headed over to Caroline's place to pick her up and take her out for a wee picnic lunch that we'd planned that morning.Caroline had purchased some of that precooked rice, with beans and lime that she thought might make a nice lunch meal along with a tin of Kirkland chicken that Uncle Carl supplies to her all the way from Dieppe New Brunswick. How does he get it onto the island during the pandemic? Well this is the genius bit, he brings it across the bridge BEFORE the bridge gets closed... ;) I'd changed the plan a bit, as I thought to cut up some vegetables and bring a lightweight camp kitchen along to saute the veggies in some desi ghee. Onion, garlic and green pepper, that were to go with some cooked in the bag basmati rice that I had in my cupboard, along with a jar of butter chicken sauce, all Caroline had to bring was her smile and the chicken.

She was pretty excited that she had sorted out the pump and filter for her Koi pond, and was eager to show it off, but I had plans to be on the road and moving so I made some polite noises, asked a few pointed questions to keep her wondering if I'd been paying attention to it all, and when invited to follow her into the house where she planned to get her socks and boots, I declined and made it clear that "time was a wasting." :)

We left her driveway and headed back to Crapaud, then short turned onto Old Town Road that I was fairly certain would bring us out close to Inkerman road to the north, where we opted to instead head north on County Line road that is a mixture of paved and clay road that is less than ideal in a wet spring, but this time of year is rock hard and fairly smooth. 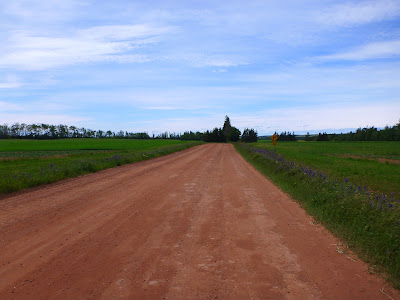 I was in a mood to go slow and stop to smell the roses, or rather, the Lupins that are peaking this week here on the Island. This time of year is absolutely gorgeous, and I spend a good portion of each ride looking at the roadsides where the Lupins fill the ditches and unmowed areas around the many farms. 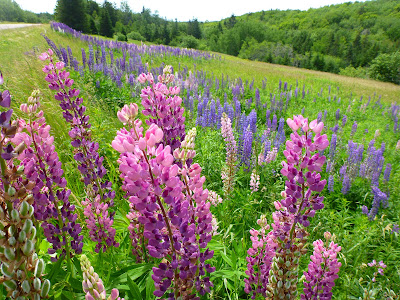 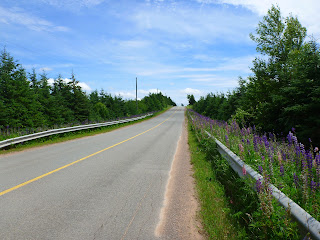 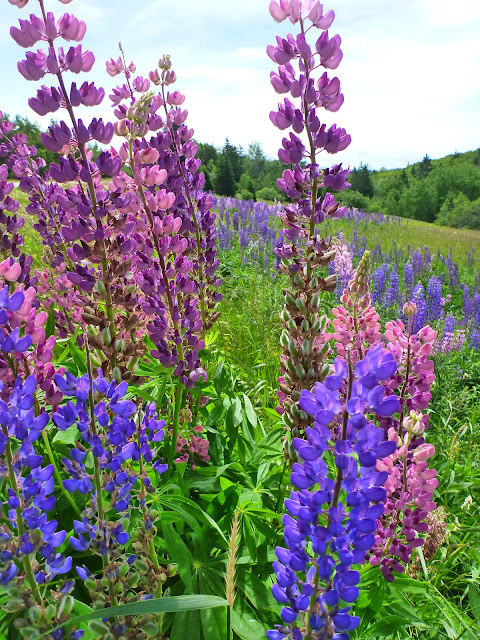 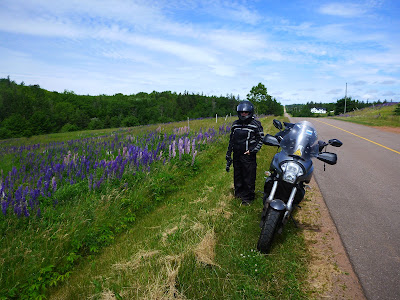 I didn't get very far up County Line before stopping and taking a few pictures. I try to find the Lupins growing with all three colours, the blue, white and pink bordering on a red. I think there are yellow as well, but more down East than around here, if I recall correctly.

Yeah, this was going to be a slow lazy ride with lots of butterfly watching, I could tell and I warned Caroline that this was how I was rolling this afternoon. Lol.

We simply kept heading north on County Line, and i knew that we could turn to the right and be out onto Highway 2 along Number 8, but I was at a bit of a loss as to whether my reference point, the Route 2 Diner was East or West of us, and Caroline pointed me off to the right, so I made the turn and we headed back East along highway 2 while I kept looking for the Diner on the hilltop to the right, as I knew the road I was looking for was further East and off to our left.

Unfortunately, it was NOT the Hazel Grove Road, but I took it anyway, and it kept going when it changed from pavement to groomed gravel and clay, up and down the hillsides until we got to the bitter end, or rather a sign that said "Here be Dragons"

Uhoh Toto! We're not in Kansas anymore! The road got tighter, and I noticed that the driveways were far behind us, and we were on a one lane farm access road that was heading downhill. It makes me very happy we were on an "adventure bike".

I'm not going to lie to you, I did some of the downhill sections in first gear with the clutch out, and tried to avoid some of the more obvious rocks sticking out of the roadway, and was pathetically grateful that the roads were dry, and the very bottom had not a single bit of mud or build up of sand. Perfect, except that we were on the wrong road, and it had taken us back west, then south again to dump us out onto highway 2 again. Lol. Back to the drawing board.

It was the next road I should have turned onto, that is listed as 239, headed North towards St. Patricks, but out idea was to prepare and enjoy our lunch by the spillway in Millvale, where there is a little parkette near the pond.

The Lupins growing around the pond were amazing, but the Prince Edward Island Air Force, aka Horse Flies nearly carried us away before we even sat down to open the picnic bag! Caroline fled while I fought a rear guard action, trying desperately to give her enough time to get her jacket and helmet back on, before putting the key into the ignition and hightailing it out of there, and back out to highway 2. I did risk taking a could of extra snaps though, but Caroline suggested I remove the one that showed the flies in all their glory.

Well, I sort of wanted to to have lunch out anyway, this was the perfect opportunity to twist Caroline's arm and invite her out to lunch at the Route 2 Diner at the top of the hill. I did manage to stop and get some more photos on the way back out to the highway, as the Versys had left the kamikaze horse flies far behind. 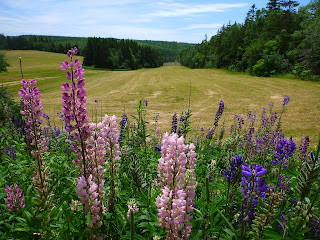 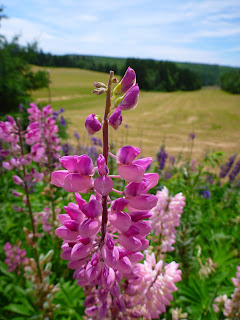 Just inside the door is a shelf just for "Crash" helmets, but someone scribbled in "safety" helmets on the sign. Lol. Please, they are for the crash and slide. 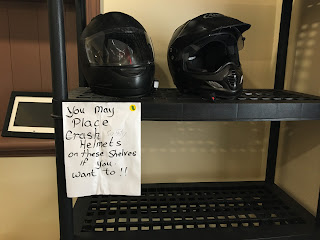 My plate shows the salad, while Caroline's had the fries. We shared both the fries and the salad, and left nothing, just smears of ketchup and zesty Italian dressing on our plates.

The owners are English, and Caroline have enjoyed everything we've tried from their menu, including the English Breakfast with the owners home cured English Bacon. Lovely!
Today we opted for the special, a bacon cheeseburger, and we ordered a western sandwich with a salad instead of fries, just to make us feel better about it all. Everything was served fresh and hot, and the service really was fantastic, although we had slipped in their doors during a slow period, an older lady enjoying a late lunch.

That was it. Caroline was "done" being a passenger, and I was quite content to head south through Fredericton Station and out to Kinkora road, then along Inkerman where we met some more of the ever present farm equipment. It must have been a great weekend to harvest hay, as we say wagon loads of it being hauled here and there about the island. 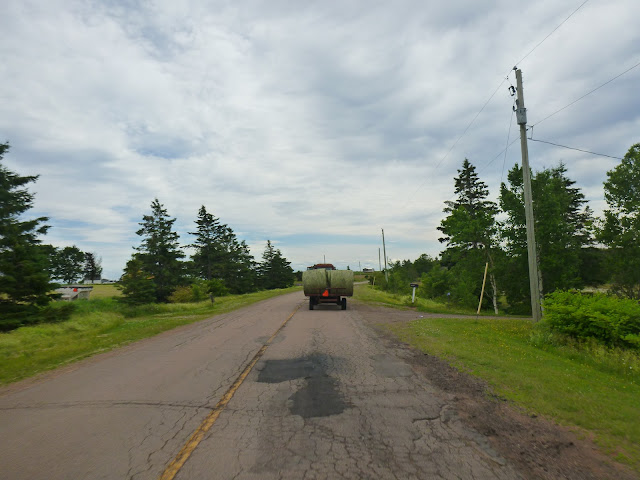 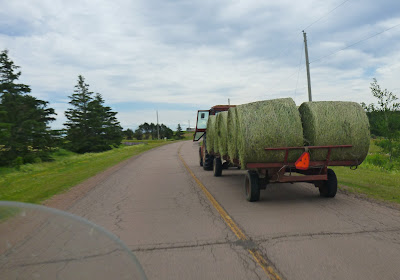 Be careful passing them, especially later in the year when you will meet wider and odder vehicles.

Back into Crapaud to end the ride at her place, where she opened the doors to the shop, and I rolled my bike into her huge shop and parked the Versys in good company with her KLR and sadly, her broken Shadow.

In the back of the shop is her son's project car, a '96 Corolla and the bits that are coming out, and going in. It's sure to be an adventure for him, and he's pretty psyched up about it, so I hope it goes well, and with a little help from his friends and colleagues, they're making some headway. 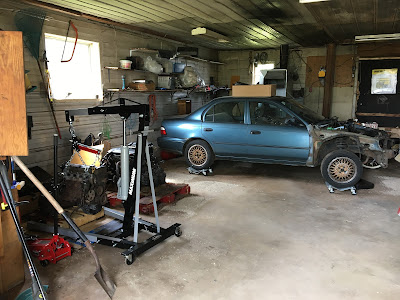 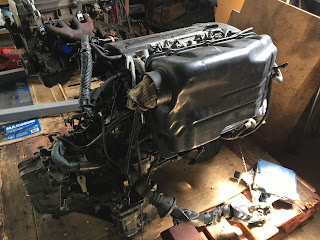 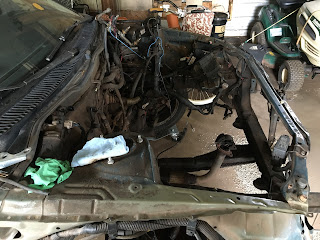 It's probably going to need a power plant at some point. I wonder if the Honda could be used as a donor engine? lol. 750cc into a Corolla, they'd never know the difference.

Oh, the cats were fairly happy to see their Lady and Mistress, and Caroline decided the Strawberries needed weeding, so tonight we feast! 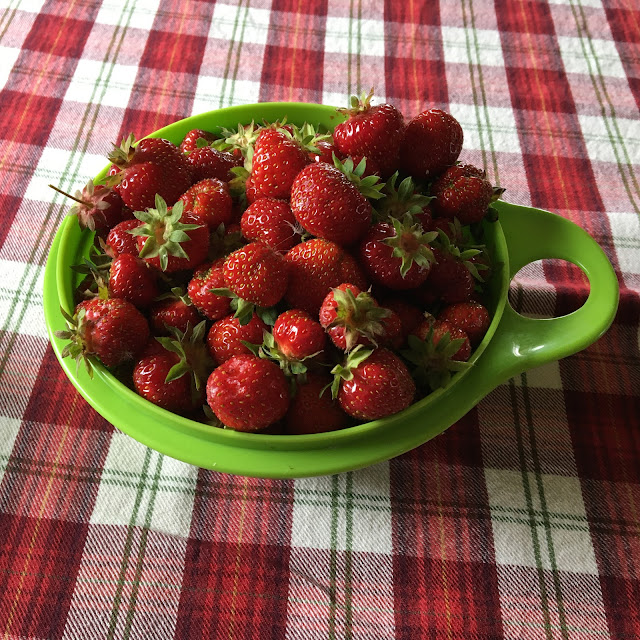 Tonight we are going to have the picnic luncheon that I prepared this morning, sans Horse flies, while her two cats, Opal and Minnie Pearl play. (Yes, I am in love with a cat lady :P )

Cheers from the Island!