KLR's are bigger and heavier than they look


It was our first time out this season, so Dan (green bike) and I (red bike)decided to take it easy at first as I'd a new front rim on my KLR with a DOT Kenda Trackmaster2 instead of my usual Kenda270, but we were both running on some older rear tires, so braking was more of a hope and prayer in any kind of mud. 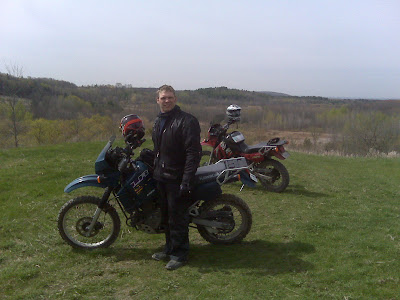 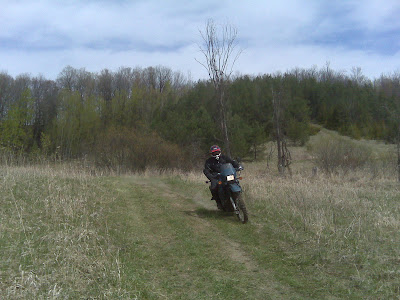 The front end was gripping pretty good and after I newbed out a few times I started getting into it and working on my cornering and tabletops.
I hit a jump in second gear, came down the back side of the hill and hit a false neutral while trying to gear down into first, was freewheeling too fast into the corner, so I locked up the rear on the grassy slope and it beat me to the bottom of the hill. Bent rear signal and had to slap my ascerbis Hand guard back down so I could use the clutch. Drop 1 Later on I got braver and decided I'd venture around and see more of the area we were in, and headed up, around, down, across and over. It wasn't until I hit a nice Quad rut that my front dropped half way to china, and before the rear fell in I fell off. Drop 2. I'd seen Dan nail it through the "Intermediate level" mud so I figured it was time to give it a go myself and I was doing great until I saw that if I kept going this fast I was going to hit a deep puddle with a steep berm and go over the handle bars, so I slowed down, ended up in yet another rut halfway to China, but this time my skip plate and pegs brought the bike to a crashing halt as it ground out and tipped me sideways onto my feet standing over a bike help up by muddy loam on either side of the rut. Not really a Drop3, but I was definitely off the bike. Drop 3 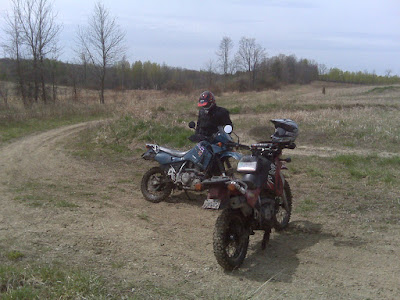 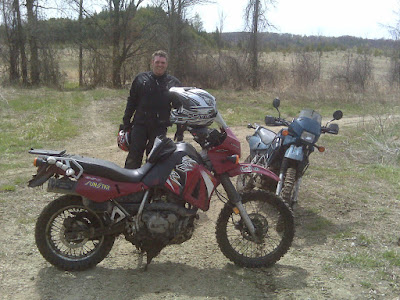 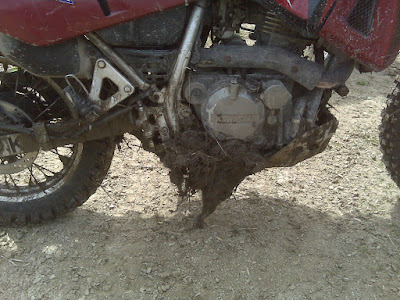 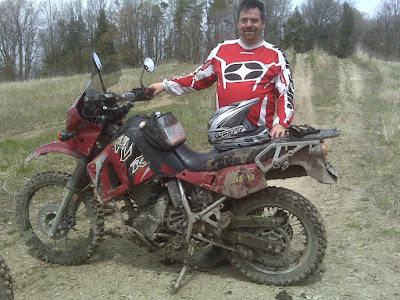 Time for some light hill climbing, by light I mean that the KLR will make it in second gear. If it were a steeper incline, I'd be in first and ready to bail off if need be. Wrestling one of these pigs up or down a hill, especially one that has all the OEM safeties still wired up is a nightmare on a muddy day.
Now for a ride down the backside. When I saw the trail ahead watered out, I stopped and watched in awe as Dan tried to make a go of it. 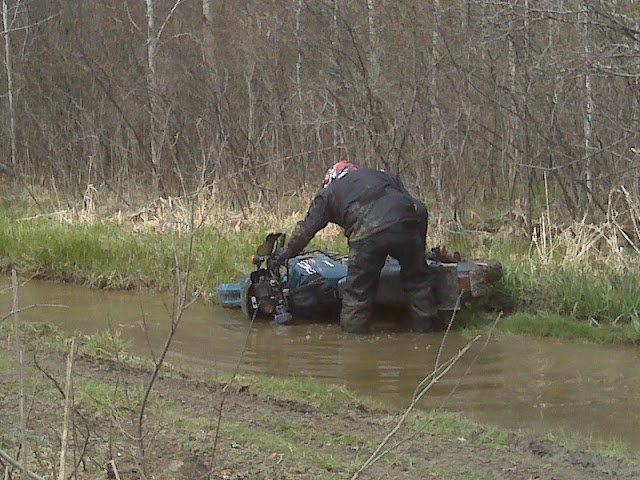 I think the dialogue went something like this, "Will you put that F*&%ing phone away and give me a hand?!"
"Not until I get a few more pictures of this. LOL" As my buddy says, "Entertainment before safety". 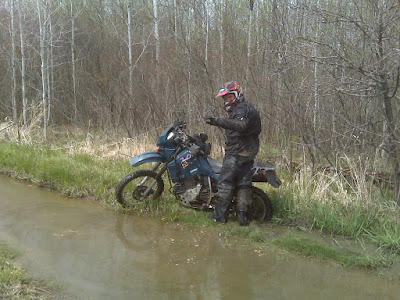 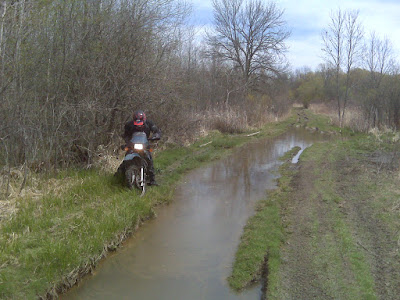 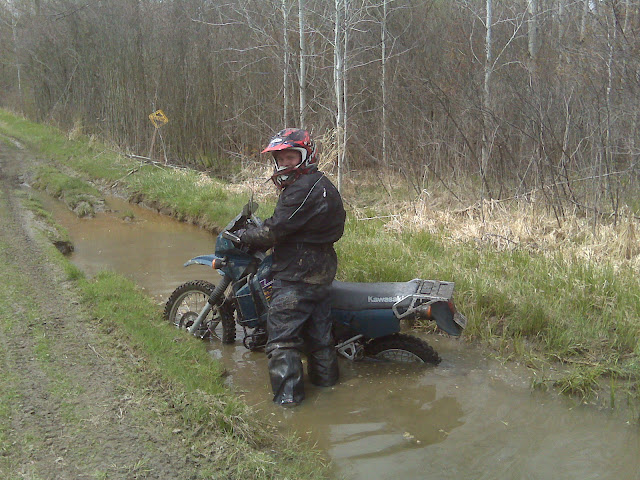 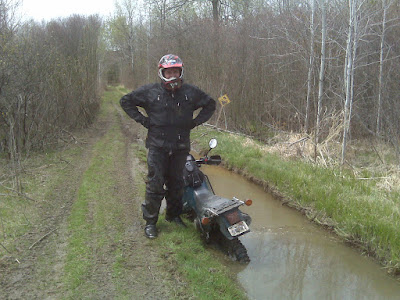 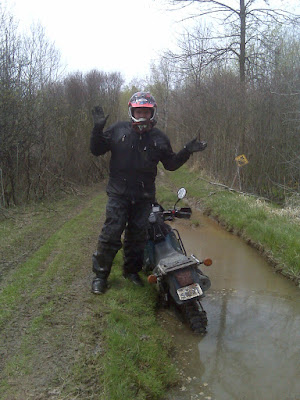 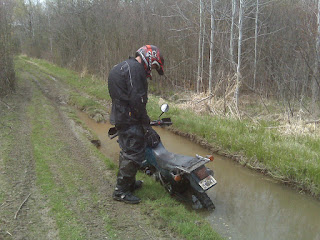 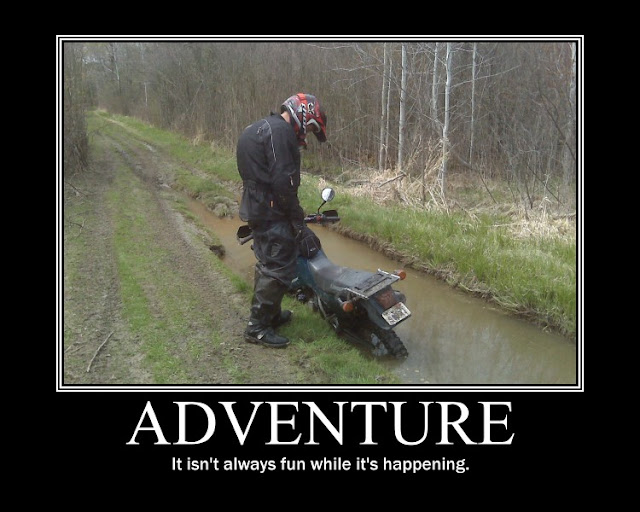 These bikes are heavy, but they were a ton of good fun. 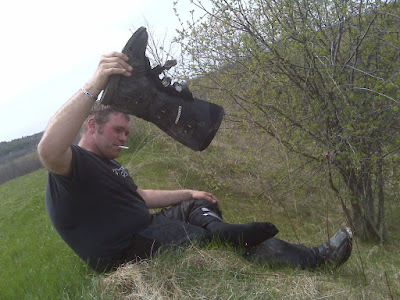 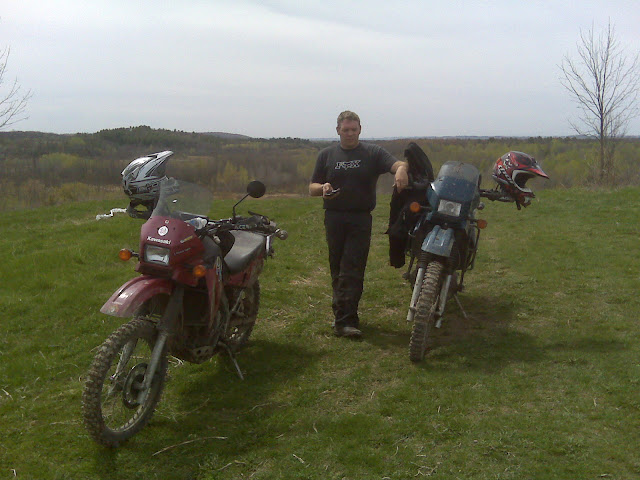 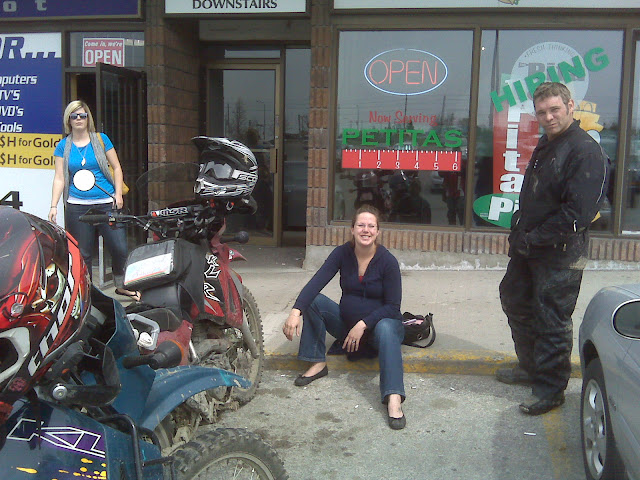