It all started on a bike like this when I was thirteen years old. My Dad led me outside and there was a beaten up old Honda Minitrail 50. It was a kick start with an automatic clutch and three speeds, Slowest, slower and slow, but it was all mine! I thrashed that bike, and my idea of maintenance was check the oil, put in 25 cents worth of gas and ride it with the throttle pinned wide open. Not much has changed.


I bequeathed this to my younger brothers, and while I dreamed of upgrading to a Yamaha 80, I eventually moved on to other things and left riding behind. the bike got moved up to the cottage until my younger brother Shaun experienced an engine fire that finally destroyed the bike.

My next bike would be a street bike, and I researched a lot of bikes with the key word "Starter" bikes until I found a used GS500e up in Bradford at Northern motorsports. Second gear roll on was scary! Hahaha.
I rode the GS500e for a full season, and put on 10,000 kilometres on it before upgrading to a 2001 Suzuki Bandit GSF600s that would give me my first real taste of long distance touring. I put 44,000 kilometres on this bike before colliding with a deer on the highway in the summer of 2007. It's still in my garage in 2011, awaiting fork tube inners and some body work. Perhaps we'll make it back to the East Coast again some day. Update: 2011-07 was it's first time back on the road since Bandit vs. Bambi. It's ALIVE!!!

I bought this 2005 Honda VFR800a Interceptor off the showroom floor at Suzuki of Newmarket in July of 2007 and put 33,000 kilometres on the odometer before colliding with an oldsmobile in October of that year, writing off the bike.
In November of 2007 I replaced the VFR with this used 2004 Kawasaki KLR 650 dual sport that I found on the Ontario Dual Sport Club website belonging to Tinker. It's the slowest of all the bikes with the exception of the minitrail, but it's by far been the most challenging, exhilarating, and comfortable to ride. (That's a combination of on and offroad).


I just bought a new to me 2009 Suzuki DR650E. It's lighter and smaller than the KLR, not nearly as well suited to the highway, yet nimble and fun in traffic. This may be the perfect commuter bike, but the jury is out for long distance riding on it.

4,000km over four days and I'm really beginning to enjoy apart from the stock seat. It's a true butt burner for a long day in the saddle, but superb for offroad, so I'll pick up a new seat pan and get it upholstered or buy a Corbin seat, my preferred all day seat and go from there.

I traded the DR650E for a 2009 Kawasaki Versys 650, and while it kind of puts me out of the dirt, it allows me to ride two up again with my girlfriend, and I can tour on this thing. Yes, gravel roads are now more of a challenge, but doing the distance on the highway for a tour is a good trade off in my books. And yes, I broke the OEM exhaust bouncing over a rock embedded in the trail, and had a get off in the sand further on down...  It's not an off road bike. Lol. 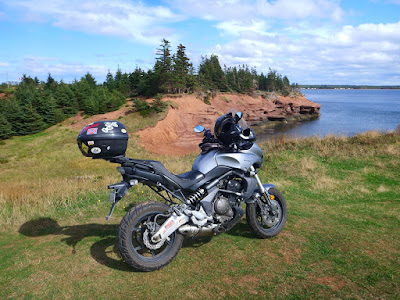 But it is extremely entertaining and I've run it since 2013 and have put over 118,000 kilometres onto the odometer, 100,000 plus being my own. I love the bike, it's a great commuter, a brilliant touring bike, and fantastic for just a Sunday blitz out on the twisties for a 300 kilometer lunch.

I just bought a used 2001 Honda XR400 from a friend that rode it harder than I ever will, but not for lack of trying. The Versys gets the touring duty, while the XR is for RedDirtRiders.com fun in the red clay with my nephews. I can't wait to get it up and running in time for spring!
Update: It's Alive!!! The carb needed some TLC. :D